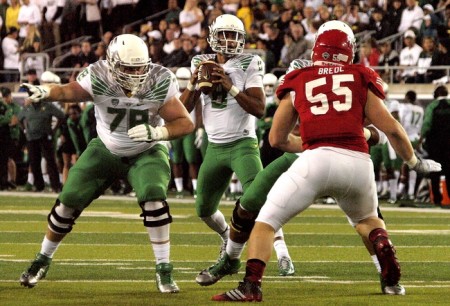 As he was coming off the field at the end of the first half Oregon coach Mark Helfrich said that he was upset as upset could be with the scoreboard reading what it read.

His Oregon team didn’t quite play a stellar first half with penalties, missed tackles, a couple of kicking game issues and a mental error that directly cost the Ducks a touchdown.

South Dakota’s quarterback Kevin Earl had a good first half, making some key third downs to sustain drives and from Helfrich’s remarks one would think the Ducks and Coyotes were in a slugfest going into the halftime break.

Upset as upset can be or not, the scoreboard told quite a different tale; Oregon 41, South Dakota 13.

Marcus Mariota was 14-of-20 for 267 yards and three touchdowns through the air. The Heisman Trophy candidate also rushed for 47 yards and another touchdown, breaking Joey Harrington’s school record for total touchdowns with 79.

While Helfrich and offensive coordinator Scott Frost kept the playbook mostly under wraps, Oregon fans did see a few new wrinkles to the offense. Running back Byron Marshall proved to be an effective receiver lining up in the slot, catching eight balls and scoring twice. Freshman Dwayne Stanford’s first catch was good for a touchdown, and basketball standout Johnathan Loyd saw his first playing time in football.

Mariota found Stanford deep down the middle of the field for a 62-yard touchdown. With the two-point conversion good, the Ducks held a very early 8-0 lead just 88 seconds into the game.

The defense’s tough first half started off with the Coyotes first drive that saw missed tackles, too many for new defensive coordinator Don Pellum to witness, and South Dakota nailed a 47-yard field goal with 9:02 left in the first quarter.

Mariota got right to work again when he found Marshall coming out of the backfield and no Coyote linebacker felt the need to cover him. What resulted was a 41-yard pitch-and-catch for a touchdown and a 14-3 lead.

After a punt, Oregon drove down the field (five plays for 58 yards) that ended with Royce Freeman scoring the first of what should be many, many trips to the end zone. The 6-foot-1, 229-pound true freshman has drawn comparisons to Jonathan Stewart with his speed and size. At least in his first outing Freeman lived up to the billing with 10 carries for 75 yards and two touchdowns.

Up 21-6 midway through the second quarter, the Ducks gave the ball back to Freeman for a 26-yard scamper down the right sideline for the 28-6 lead.

But the learning didn’t stop. Marshall had an apparent 58-yard touchdown run, but replay showed he inexplicably dropped the football short of the goal line. To make matters worse, the ball rolled out of bounds after crossing the goal line.

Touch BACK, not touchDOWN.

It was a minor stain on what was a major night, a career night, for Marshall. The 5-10, 205-pounder led Oregon with 89 rushing yards and 138 receiving yards on eight catches and two touchdowns. Marshall found himself as a slot receiver in some formations and he looked like he had played the position his entire life. He was unafraid of going across the middle and taking a big hit without dropping the ball.

Marshall’s 11-yard touchdown reception came in just that way and it gave the Ducks a 35-6 lead with 3:57 left before halftime.

Mariota added one more touchdown just before the half after South Dakota made its way into the end zone. With the school touchdown record in his hip pocket, Mariota’s night was finished.

The second half consisted of showing what kind of depth the Ducks might possess and the answer is plenty.

Oregon fans might want to quickly familiarize themselves with freshman receiver Charles Nelson. The Daytona Beach, Florida native had just one catch, but he showed off the afterburners with a 50-yard punt return for a touchdown and a 48-13 lead. At 5-8 and 170 pounds, it could have been De’Anthony Thomas in that No. 6 jersey, not Nelson.

Redshirt freshman Darren Carrington had a good debut with four catches and 68 yards. He just adds depth at the receiver position, a slot that doesn’t have a ton of experience, so the more, the merrier. A total of 11 different Ducks caught at least one pass.

No. 1 Florida State and No. 2 Alabama both won, but neither impressively, so Oregon will most likely retain its No. 3 ranking. MichiganState will also likely to remain at No. 8 unless the AP pollsters choose to punish No. 7 UCLA and No. 5 Ohio State for lackluster performances. The Spartans defeated JacksonvilleState 45-7 Friday night.

ESPN GameDay announced they would be in Eugene next week for the showdown with No. 8 Michigan State. Kickoff is set for 3 pm.

Royce Freeman validates the hype in first game at Oregon

College Football Nation: “Johnny Who?” and FSU Survives a Scare