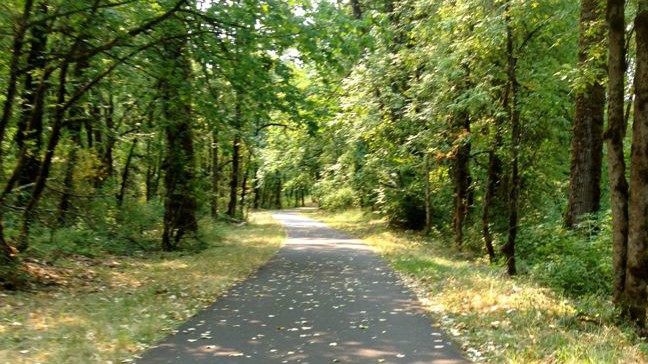 Sometimes the best laid plans are meant to be broken, such is life.  I did all of my household chores yesterday in anticipation for today, Sunday.  A day of rest (on the veranda).  I had purchased a pool about a month ago, just a small one that could get the job done in the comfort of my own back yard.  Sure the river is fun to go to but it is so much easier to walk outside to the back yard and well, float around if needed.  So, after a little neglect I scrubbed her down with all intentions of hanging poolside today, without a care in the world.  And then it hit me.  I wanted to go on a bike ride but I wanted difference scenery and remembered the new bike path at Dorris Ranch in Springfield.  I wrote a little about it in my mothers day column here. Have Bike Will Travel

I don’t mind doing things by myself but I believe things are much more fun with someone by your side so just before I pulled out of my driveway and headed south towards Springfield; I sent out an invitation on Facebook to see if anyone wanted to join me.  I got a few responses from Alaska, California and Washington but lets be honest, nothing could transport any of those offers quickly to my side.  I did get a note from my favorite comic man Salpino and after a few messages we figured we could connect at Island Park in Springfield as the Middle Fork Bike Path connects to it.

The race was on.  He was coming from Eugene River Road area, me; I had a 4 mile journey… this would be fun… I got my bike out of my Sportage, put my helmet on, tucked the bangs in and did the worst thing I could possibly do… I looked in my window to see how it looked!  NEVER look in the mirror with a bike helmet on.  The guy at the helmet shop even told me that it would be in my best interest to not look in the mirror (now that’s funny).  I should point out, he says that to everyone.  I took the helmet off, fluffed up my hair and tried it again.  It was too pouffy under the helmet.  I was having a really good hair day and this helmet was going to do some serious damage and negate all the effort I put into it before I left my house. I figured hey, I would rather look really dorky alive than really stupid dead.  I found a hair tie in my car, tucked my bangs in under my helmet, locked my car, put my backpack on and slung my camera over my shoulder and off I went.  In my mind, I was trying to figure out how the new path reached Island Park in Springfield.  I am not typically directionally challenged, but I couldn’t’ figure out how this would work, it seemed that Island Park was in the opposite direction.  I thought it best to ask someone so I stopped the first person I saw.  With a smile she told me the path lead to Clearwater Park and it was close to 4 miles, she wished me well and off she went.  Panic set in and I realized Salpino was on his way to meet me at the wrong park!  I fumbled for my phone and that was just a mess.  I can’t see important things without my glasses anymore, so that was an ordeal to get to them and in doing so, I got tangled up in all the straps from my camera bag, ear buds and backpack.

I sent a quick message telling Salpino about my error and hoped he would get it.  I put everything back on and began to peddle like there was no tomorrow.  By Salpino’s estimations, he would be at Island park in 20 minutes.  After messing with my hair and the helmet that meant I had about 12 minutes left to ride 8 miles on my bike, get back to my car and get to Island Park.  I came all this way (about 40 minutes) to ride my bike on this awesome trail and by George, I was going to do it. It really was a nice bike ride (although I am now going to be checking into that moisture wicking clothing).  The path meanders alongside the Willamette River.  I passed a few families; both walking and riding their bikes.  I must say, no one looked dumb in their bike helmets, I actually thought they looked rather cool to be honest, I just hope I looked as cool in mine.  Yes, I checked em out and what I did notice were the people who were not wearing a helmet.  I truly did debate on wearing mine or not.  I mean really, what could happen on a bike path.  Well, anything could happen and it’s best to be safe than sorry.  I figured I was going to have a bad case of helmet head and dreaded taking it off, but really, in the grand scheme of things who cares?  I did have to go around a couple of large Garter snakes as they were crossing the path (nope, they don’t bother me one bit) I even had a race with a gray squirrel.

There were some really cool spots to pull over and rest or take photographs but I was on a mission; I had a friend waiting on me and I couldn’t let him down so on I peddled.  Rounding a bend I spotted a gal off in a field alone working on her Tai Chi.  I thought it was pretty cool and knew I could get a great photograph of her and for a split second wobbled on my bike trying to decide if I should stop and take a photograph of her.  In the end I decided that was her time and I didn’t want to invade on any level so I kicked it into high gear and forged on.  There are mile markers every quarter mile.  Finally reaching Island park I sent Salpino a text to let him know I would drive to Island Park as soon as I returned to my car.  I got the big camera out, snapped a couple pics, sipped some water, turned around and headed back to wence I came. Mile marker 3.75 miles… 2 miles, 1.50 miles to go…. Yay I said to myself… I am almost there, I can do this!  Then I saw the hill.  It seemed as if I was in a long hallway in a scary movie and it just kept getting longer and longer.  Even though I ride my bike often, I am far from being anywhere near an endurance rider and up hill is certainly not my first option.  I will whine all the way up, as will my leg muscles and lungs. What could I do but carry on.

I huffed and puffed and set my gears on the easiest one I could find.  I heard a man’s voice yell behind me HILL!  Then a mothers voice rang out, encouraging her son of about 7 years old that “he could do it” she said… “Keep peddling…” I kept my eye on the prize, sweat pouring off my brow when I looked to my left and here, the family was passing me.  The mom and dad knowing their little kid was following them like a champ giving it all he had.  The adults were about 75 feet ahead of me like seasoned pro’s when I heard some heavy breathing.  It was the little kid!  He was right beside me.  I must have been staggering up the hill because he was on my right.  Poor thing, his face was beat red and he looked like he wanted to cry.  I could feel his pain, I had my own going on.  I tried to lighten the mood and asked him “Do you want to race me?”  He cracked a smile, kicked it into gear and sped passed me up the hill. Once I crested the hill I wanted to shout out to the world “I made it”.  I could see the parking lot!  Once I reached my car, I tossed my bike into the back and headed to Island Park, found Salpino and he suggested we go to Coburg Pizza on Centennial for lunch.

“It’s right around the corner” he says.

I put my helmet back on, Salpino offered to carry my camera for me and off we went.  I just googled it and guess what Salpino;  it’s actually 2.26 miles from where we were standing!  Relief washed over me as soon as we entered Coburg Pizza.  The air conditioning was amazing and the aroma was even better. Salpino locking up the bikes

We found a table and I headed to the ladies room to freshen up and try to compose myself and catch my breath.  It had been a day already!  Salpino had ice waters at the ready when I returned to our table.  We decided on what to order and if you have ever been to Coburg Pizza, you will know that is not an easy decision to make.  Their menu is amazing. I love their pizza but this girl needed something cold (like a glacier to lay on).  I decided on the Oriental Chicken Salad.  Salpino chose that as well in addition to the spaghetti and boneless chicken wings.   While we waited for our food, Salpino took off for a second and came back with Etch A Sketches!  I haven’t’ played with one of those forever.  I was sitting with one of the best cartoonists ever and I couldn’t wait to see his creation.  Our salads showed up right away and took precedents over drawing so we would sketch another time perhaps.  The food was delicious.  The salad was huge and exactly what I needed (it was loaded with spinach).

We had a very enjoyable visit.  I learned a little bit more about Cyd Salpino, who is not just an awesome cartoonist and friend but he also broadcasts on 96.1 KZEL in Eugene.  At times we forgot where we were and may have gotten a little loud with our laughter.  It was time we headed out and the heat was nice but to be honest, I didn’t look forward to the ride back to Island Park.  I was tired but the ride back was better after a nice relaxing lunch.  It seemed we were back at the park in no time.  We said our goodbyes and headed in our own directions to continue the rest of our day. Sometimes, those best laid plans are meant to be broken, to cast all caution to the wind and just do what feels right.  I got a 13 mile bike ride in and got to enjoy some good laughter with a good friend over some great food.  How can you beat that?

Helmets do save lives.  A friend insisted on taking me to a bike shop and had me fitted for this one (it is really important that your helmet fits well) and then insisted on purchasing it for me.  What better way to say I care about you right?

I am heading out to my pool now.  I hope you enjoyed your weekend.