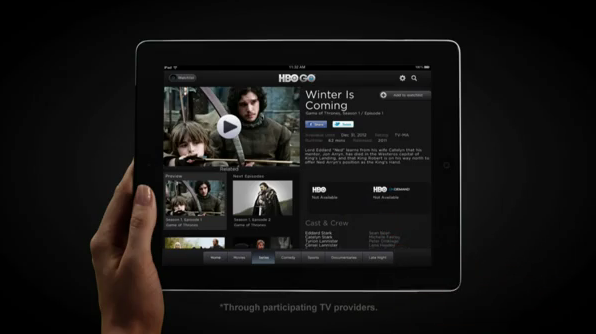 Who would have thought that Game of Thrones would save the future of mass media consumption in America?

Cord cutting, or the act of cancelling cable TV, is not just for broke twenty-somethings anymore. It’s gone mainstream. Recent studies show that educated, employed consumers make up most of the people choosing to cut ties with the cable box.

With the economy still struggling to keep us all afloat, people all over have been searching for ways to trim their budget and cable companies are quickly becoming first on the list. While cable providers still run the whole show off an infrastructure that is decades old and a technology that was new back when Seinfeld was still on NBC, consumers have just accepted their inordinately high cable bills. Providers have moved the pieces around the board for the last thirty years putting themselves in this position. Millions of people rely on their services for home entertainment, and they have reaped billions in the meantime. Just look at Comcast sitting up there on top of the world, owning a once-great broadcast channel and makin’ movies.. Awww… Aren’t they cute when they try to look as popular as Disney?

This all started with the Telecommunications Reform Act of 1996. Where corporate lobbying and political corruption joined forces to sell us one of the biggest pieces of garbage legislation this country has ever seen. We’ve been eating it by the spoonful ever since. I don’t think the Act is the first time corporations have joined forces with the government to defraud the American people, but passing a law that supposedly promotes mass media diversity and air wave independence seemed like a great idea at the time.

Maybe I was just younger then, but I don’t remember always feeling like I’m getting fleeced from the moment I get up in the morning til the time I drop off at night.

Hindsight being 20/20, they basically all lied. Surprise! What the Act was supposed to do was make it possible for consumers to have more entertainment choices because all these independent cable/internet/phone providers were going to start up out of the woodwork, and Fiscal Nirvana was on its way. What really happened was it cleared the way for any company to buy any media outlet anywhere. Mergers, acquisitions, and twenty years later, there are four companies that provide comparable phone service. Three companies that own all of the radio stations. Two corporations that sell comparable cable services… And just one mega-conglomerate that owns the tap on high-speed broadband internet. These providers got us all hooked with the promise of freedom, then they created arbitrary price structures and manufactured obsolescence right into the system. With things like cable boxes, yearly cell phone model updates, and higher-definition picture quality, consumers just keep paying and paying. Not only are we thereby dependent on these monopolies to provide us the very things that make modern life modern, but they are free to charge us whatever they want for it. The only recourse we have is to stop using the services they know we’ve become dependent on.

So much for fostering a free and independent media market.

People are catching on, and the Comcasts of the world are living on borrowed time. Every time a budget-concerned consumer has to shell out more than they’re willing to for a “luxury” like internet or television, an anti-corporate angel gets its wings. The internet has accomplished one thing if has anything else, and that is to give a previously scattered and jumbled crowd of voices one giant megaphone with which to bitch in unison. Enter Game of Thrones, the wildly popular HBO series based on George R.R. Martin’s fantasy novels. On the air for four seasons now, Game of Thrones holds the special prize of being the most pirated show ever. The solitary fact that Game of Thrones is watched by millions of viewers that don’t pay for the right to do so has caught the attention of HBO execs who see a potential goldmine of opportunity there. Ever since Netflix began offering it’s cheap, reliable streaming service a few years ago for $8 a month, the company that started by sending DVDs to your mailbox quickly has transformed into a multimedia powerhouse. Watching one company rise from sending discs in envelopes into a critically-acclaimed entertainment studio in under a decade has other corporations scrambling for a piece of the pie. However, the major setback has always been the deals that cable companies struck with production studios and television channels. While there has always been an outcry for a stand-alone HBO Go app, the company wouldn’t risk losing the choice deals it has with packaged-channel providers.

As of last week, HBO announced that in 2015, it will start offering access to its HBO Go app for a monthly fee, instead of making it exclusively available to cable customers, as it is now. I would like to believe that this is the beginning of the end that sparked when Netflix offered it’s first streaming service. I would like to believe that from here, cable companies will have to find another way to line their pockets while their customers jump ship for more and more stand alone products like Netflix and HBO Go.

The simple truth is that the Comcasts of the world rely on laziness. They rely on the fact that Americans want a shiny, reliable package. But as modern life gets busier and busier, and our time becomes more and more valuable to us, having a cable package that offers 700 channels of crap versus the one thing consumers want to watch at any given moment… Well that’s just insane.

When we cut the cord in our house two years ago we thought that getting to watch out favorite shows would be a hassle. Guess what happened? The opposite, it got easier. Without 700 channels of crap to distract us, we only watch the shows and movies that we want to watch. While it does take the always enjoyable “what’s this random movie/show?” scenario out of our daily life, paying another $50-75 a month to Comcast to watch a handful of hours of television a week is just crazy. That is, until all these new stand alone services start adding up to more than a cable package of course, but I’m just cynical like that.

Watching shows and movies across a handful of devices and consoles might not be as simple as picking up one remote and pushing buttons, but I’m not so lazy that I won’t spend a few moments setting up a show online to save myself a chunk of cash. Do I actually think that Digital Cable is going anywhere? No, there are way too many lazy people and Luddites out there to make that happen anytime soon. But at least I’ll be able to watch the next season of Game of Thrones by paying the studio that created it instead of some cable company that packaged it with 10,000 cooking shows and singing competitions.