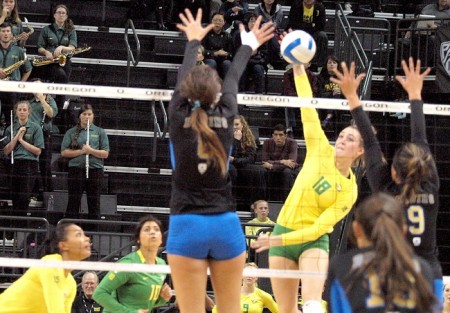 From start to finish, this was a close match. Earlier in the season UCLA emerged victorious in four sets, playing the Ducks at a high school due to Pauley Pavilion being closed for renovations. Friday’s match was certainly no high school experience, with Matt Court hosting a boisterous crowd of 2,346 and the majority of the Oregon Ducks marching band in the west end of the arena.

The first point of the match was a service ace by Kacey Nady, which set the tone for serving for the rest of the night. Oregon’s 10 service aces was a season high. “We served really well. We scored 19 points serving and blocking; that makes life a little easier,” said head coach Jim Moore.

The Ducks started rough from that point on, however; after going up 2-1, UCLA scored five straight on Oregon and held the lead until the Ducks battled back to a 13-13 tie. From that point the teams went back and forth until Oregon led 16-15, and led through the remainder of the first set. They were able to close out on top primarily through the kind of balanced attack that they like to play, and by keeping down the offensive production of UCLA’s Kairsta Lowe. Lowe scorched the Ducks for 33 kills at their last meeting, and Oregon knew they were going to have to defend better if they were going to come out on top in this match. Lowe scored a paltry three kills in the first set on Friday.

As explained by coach Moore, “We needed somebody to match up on Kairsta. (Starter Taylor Agost) did an awesome job. Taylor blocked some balls early on Kairsta that made us all look like we knew what we were doing…that made everybody feel better.”

Oregon was slow to get started in the second set, going down 2-5 before scratching back to a 17-17 tie. The Ducks were nothing if not tenacious, and once they gained the tie they went for UCLA’s throat to put them down two sets to none. Martenne Bettendorf was one of the stars of this second set, with all of her six kills for the set coming at crucial moments.

Oregon started slow in the third set, but fortunately they were never down more than three points. After going up 14-13, Oregon led until UCLA scored a 24-23 advantage. The Bruins were never quite able to put the game away and the Ducks would prevail, as they had all night.

“I think we did a really good job tonight; battling and attacking, just staying on it,” said senior Liz Brenner. “We didn’t really start out (all three sets) very well, so I think that says a lot about us, being able to come back and win those games.”

“It’s a big win. We did a lot of really good things tonight – I’m really happy with that,” added coach Moore.

For the Bruins, Kairsta Lowe led with 22 kills. UCLA was held to a .203 attacking percentage and seven blocks.

Martenne Bettendorf and Frankie Shebby were the kill leaders for Oregon, and each scored 12. Maggie Scott brought 21 assists and Shellsy Ashen had 19 assists, with both continuing to share setting duties. Six Ducks had six digs or more, led by Scott’s 12, as Oregon had perhaps its best defensive performance of the season. Oregon scored nine blocks to go with the 56 team digs.

“I think composure is huge, especially with a lot of young girls out there, a lot of girls that just don’t have that much experience playing. I think tonight we did a great job of holding it together and fighting through it, and the girls performed well,” noted Liz Brenner.

Oregon will play #25 USC on Sunday before closing out the season on the road at Utah and Oregon State. If they do well, they could be looking at hosting the first round of the NCAA tournament for the third year in a row. Coach Moore thinks that would be the case already, but knows that nothing is guaranteed before the fact, and the Ducks need to close out the 2014 season strong. “We want to keep going up,” he said. “I’d like to win all four (of the last games of the regular season), and we need to so that, so we need to take care of business on Sunday, then Tuesday, and Friday as well.”

Three Points of Interest for the Ducks vs Buffaloes Match-Up