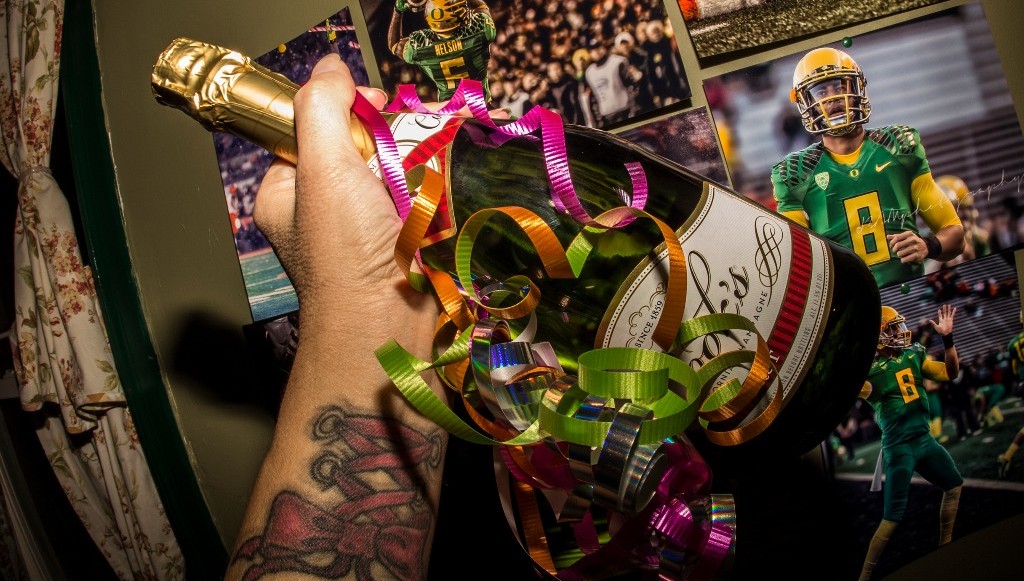 This year has been a pretty crazy one for me, which  started with me in bed sicker then I have ever been with the swine flu.

From becoming KFLY’s radio station rock mom of 2014 to shooting the Ducks football game a dream come true, it was a  year of unforgettables for me! I bought myself a bass and even learned a song on it, went to Motley Crue’s final tour met Kip Winger, the Bullet boys and Florida Georgia line and flew in a B17 bomber. I even wrote my own column for Eugene Daily News. I made many good friends, there were also some lost who will be missed and always remembered. Adena, Alex, Ron,Terry and Bitboy this column is dedicated to you! So today I went out and found a dress, a pair of sparkly high heels and am ready for the night!

Party hat on and noisemaker in hand im headed for Happy Hour on River Rd. in Eugene to ring in the New Year with  ” Dragstrip Superstar.”   Derek Zane, Jeff Blaser, and Scott Johansen are sure to launch us into 2015 with a rock and roll party we wont soon forget! This year like every other year I’m making a New Years resolution. This years resolution is …”wait for it”…. no its not a gym membership or a diet.  I’m gonna be more adventurous…do things I never thought I would and take as many band photos as I can!!! Being very claustrophobic it took everything I had to crawl through a little doorway into the back of that B17 bomber, hold my breath and cover my eyes and wait…. we were in the air in seconds and when I could finally open my eyes and breath again I felt as though I could take on the world up there. Out the Bomber Window | photo by Billie-Jo Miller

heres to all of you, my readers and friends that made  2014  a year that  will be remembered.

Raise your glasses and bring on the “Cheap Champagne and Midnight Kisses!” If your looking for someplace to dance into 2015…Heres my  list of New Years celebrations.

The Mohawk Tavern: Bulls on Parade

Quakers: Jen and the Generators

Also just a reminder…  Alien Boy at the Mohawk this weekend the 2nd and 3rd come join them for a rockin night! Have a great New Years Eve and remember celebrate safely.

“Dont get behind the wheel if you have been drinking.”

Use a taxi or designated driver.