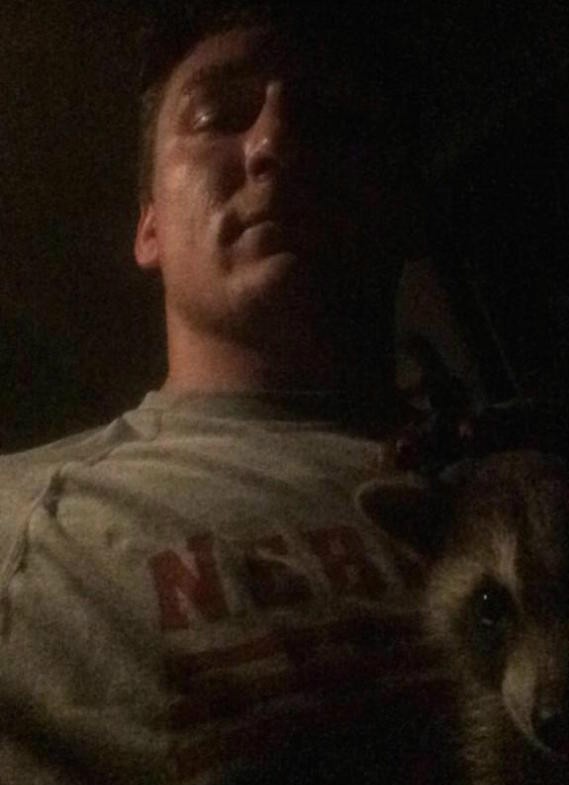 Jack Gangwish, a defensive end for the CornHuskers, was driving when he spotted a raccoon by the side of the road. Normally when such an event occurs, we do our best to avoid the animal, realize how cute the creatures are and continue on our way. Not Gangwish however. No, he decided it would be really cool if he took a selfie with the wild animal. Technically he succeeded, but then animal nature kicked in.

Upon taking the photo, the raccoon had had enough and bit Gangwish on the calf. The football player then decided that wasn’t cool so he beat the raccoon to death with a wrench. I hope it was worth it buddy. | (deadspin.com)

Apparently when you’re bit by a raccoon you’re supposed to capture it so they can test it for rabies and they do that by opening its brain. So much for that. The corpse is currently being tested regardless. Despite the moronic action, Gangwish was predictably quite arrogant about the whole thing in a series of tweets.

“Guys… I got bit by a raccoon… It just looked so soft and friendly I couldn’t help it!” said Gangwish.

“I am the coon whisper.”

I’m pretty sure he meant whisperer on that last tweet and I’ll admit the tweet about rabies being comparable to football is actually pretty funny. But he’s an idiot and while I don’t wish rabies upon anyone, I kind of secretly do in this case. At the very least he should and probably will be charged with animal abuse. Oh wait, I forgot he’s a football player so he’ll probably get off without any repercussions.

Think about the most unobservant person you know and wonder whether or not they would notice what happened in Washington state this week.  Of course they would! This story is ridiculous.

A couple returned to their apartment Monday and discovered that their love seat, matching chair and other things had been replaced with a recliner and TV stand. How considerate of the thieves to leave them replacement furniture. One question: What burglar would risk stealing heavy furniture and then take the time to replace it? Police didn’t have to look far to get an answer to that question.

A Lakewood man, who is a neighbor of the victims, as well as a friend are accused of burglary after they stole numerous belongings from the couple. Of course, if you’re going to steal from someone, it’s best not to leave behind a traffic citation stating your name and address and a pizza receipt with your information. It doesn’t take Sherlock Holmes to figure that out.

Dumb and dumber said the door to the victims was open and that the neighbor had told them they talked about moving. So the man thought they’d abandoned their furniture thus making everything in it free for the taking.

In a stunning development, the suspects had also been drinking. Both men pleaded not guilty Wednesday. In the court of public opinion however, they are both guilty of stupidity.

Do you know the “meow game?” You should. It’s a gloriously subtle game where the goal is to drop the word “meow” into a conversation without the other person or persons noticing. If successful, the only achievement is personal gratification since the other person didn’t pick up on it.

But in the world of the Internet, such an accomplishment won’t go unnoticed and it certainly didn’t for hockey player Ray Kaunisto.

Kaunisto, of the Kalamazoo Wings, was interviewed after a win and during the interview managed to drop six “meows” in just under 40 seconds. That’s one every 6.6 seconds. Very efficient on his part.

“I thought about doing it a little bit before and then I just figured let it rip and see what happens,” said Kaunisto. I almost chickened out. I almost didn’t do it, but I kind of just went with it.”

Clarification: he’s talking about the “meow game” not the hockey game he played in  if you were confused.

The game comes from the 2001 comedy Super Troopers in which a cop tries to use the word 10 times during a traffic stop. Like I said: It’s subtle, utterly pointless and also fantastic at the same time. Well played Mr. Kaunisto, well played.