The Ducks Claim Insurer Stiffed them Over Bonuses 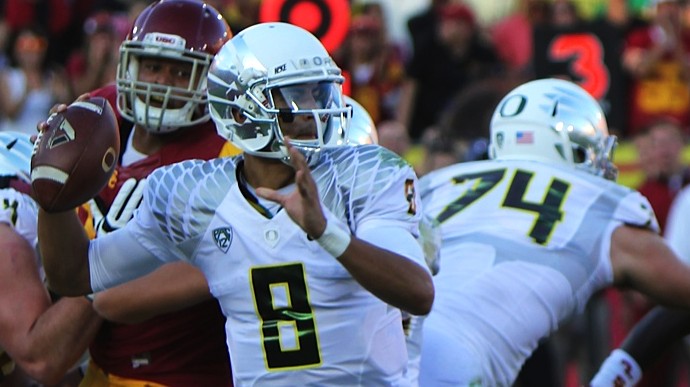 EUGENE, OR- The University of Oregon is seeking $688,000 in damages after its insurer denied a claim on a policy specifically purchased to help cover contract bonuses it paid following Chip Kelly‘s final 2012-2013 season. The bonuses, which  are written right in coaching contracts these days, included incentives for things like bowl placement, standings, and wins. The school is suing Arthur J. Gallagher Risk Management Services, Inc. and its agent Monica Drummer, after it says they sold them a Lloyd’s of London policy under false pretenses for a $490,000 premium.

In the suit, Oregon claims Drummer and Gallagher are both negligent for misrepresenting that the policy covered any and all possible contractual bonuses, and that the defendants breached their duty of care for not procuring the policy they were hired to. In 2012, just before Chip Kelly’s final season started, the  the University followed a recent trend in sports and sought contractual bonus insurance to help stem the cost of possible high payouts following a winning season. When the Ducks finished fifth in the nation at the end of the season, bringing home the trophy from the Fiesta Bowl and maintaining an 11-1 record. The University, in turn, filed a claim on the policy, just as intend. However, Gallagher soon denied it, stating the bonuses were not maximum amounts.

The Ducks ended up paying out almost $700,000 in bonuses, including a $250,000 payment to Kelly, along with around $70,000 each to Mark Helfrich and Nick Aliotti as well. The school filed a lawsuit this week in the Lane County Circuit Court.

In it, the suit claims that the idea of obtaining bonus insurance came to Executive Senior Associate Athletic Director Eric Roedl, who took it to the Oregon University System’s Chief Risk Officer, Ellen Holland. His hope was the idea of covering at least a portion of the costs the team could incur in such a case.

Roedl worked closely with a different firm before taking the idea to Holland, so that he could make sure any policy contained clauses for both partial and maximum bonus amounts. However, unbeknownst to Roedl, the OUS requires insurance through a preferred broker. Nonetheless Holland agreed, and passed the policy along to their agent, Drummer. She included Roedl’s proposal policy and email correspondence with the previous agent, in order to draw up an identical policy. The University says it received the policy for final review on September 7, 2012, only to find that it made no mention of partial bonuses. Instead, it focused on maximum amounts, which triggered in the event that the team finish the season under a strict set of circumstances. Another Gallagher broker reassured the University via email that the policy covered all paymetns, even partial payment, and went so far as to include an example.

The school says they were told “Any one item can trigger a partial payment of the loss limit. Referring to page 6 of the quote, if any one or combination of events occurs, the policy will pay.”

The suit was filed in Lane County Circuit Court by Joshua Stump, an attorney with Harrang, Long, Gary, Rudnick, out of Portland.

The Ducks are currently #2 in the nation, and will face Ohio State for the National Championship, Monday, January 12.