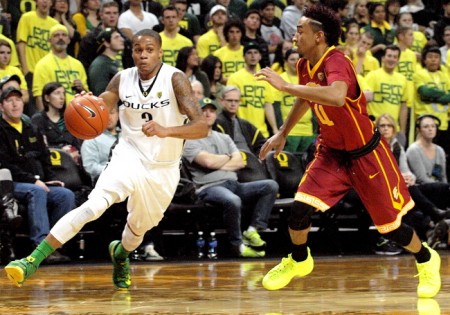 When the Trojans look back on the 2014-15 season, they’ll point to the game at Oregon as one that probably got away.

USC had a golden opportunity to steal one on the road, but the Ducks made just enough plays in the end to escape with a 75-67 win Thursday night at Matthew Knight Arena.

Oregon made a huge effort in practice on making the defense better and on this night at least, the defense was there more times than it was not.

It was a difficult second half for the Ducks that saw a 13-point halftime lead eventually erased with 5:40 remaining when Julian Jacobs’ three-point play tied the game at 61-61.

Oregon clamped down on the defense at the point and held USC to just six points down the stretch.

Meanwhile, the Ducks were killing the Trojans from the free throw line, going 12-of-14 in the last five minutes to seal the deal.

Joseph Young led the Ducks with 19 points and went over the 1,000-point mark for his career in doing so. Elgin Cook added 15 and Dillon Brooks managed 12. Jalil Abdul-Bassit came off the bench to score 11.

Jordan Bell, who left the game with three minutes to go due to an inadvertent to the face, pulled down 13 rebounds and blocked three more shots to add to his season-breaking total of 66.

Oregon needed this win to go to 3-3 in conference and 13-6 overall. The Ducks suffered two losses in Washington, two losses that could have easily been wins. USC fell to 1-4 in conference play and 9-11 overall.

The first half featured a little of everything for Oregon; some good, some bad, and plenty ugly. But when all was said and done, the Ducks went into the locker room with a 44-31 lead.

Oregon started on fire from both ends of the floor, going on a 16-2 run to begin the contest. Defensive communication was a point of emphasis and in the initial five minutes, it was there. But then there were lapses and the Trojans turned a 14-point deficit into a five-point deficit at 19-14.

Abdul-Bassit came off the bench and restored some order by hitting a couple from long range. The Ducks briefly held a 10-point lead. USC remained within shouting distance for most of the half, but Casey Benson nailed a three for the 36-25 lead.

USC was held to without a field goal in the last five minutes of the half after Julian Jacobs’ three brought the Trojans to just a six-point deficit at 36-30. Oregon turned on the defense once again in order to grab the double-digit halftime lead.

Oregon was far from shy from shooting the three-point shot in the first 20 minutes, going 7-of-18 from long range and 15-of-33 from the field. On the other side, the Trojans were having a hard time finding the range, long or short. USC shot 33 percent from the field (11-of-33) and 3-of-9 from the three-point line.

The Ducks will now host a struggling UCLA team that just went down in defeat in Corvallis 66-55. The Bruins are just 11-8 overall and 3-3 in conference action. The game is scheduled for a 1 pm tip on CBS.

The post Ducks Hold Off Trojans 75-67 appeared first on DuckNews.com.