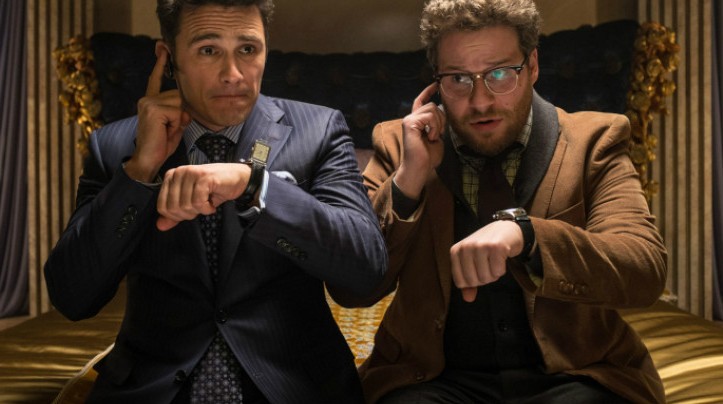 ‘The Interview’ Coming to Netflix

All Seth Rogen wanted to do was make a comedy about North Korea and all it’s ridiculousness. He didn’t anticipate all the attention his movie would receive for all the wrong reasons.

Denied a theatrical release by all of the major theater chains in North America following a threat against the U.S. by someone that wasn’t North Korea as it turned out, The Interview found new life in select art-house theaters and on VOD. You can catch ‘The Interview’ on Netflix this weekend. | (NYPost)

The film was initially available on platforms like Xbox Live and Google Play and it has since been made available on iTunes and the PlayStation Network. But there’s good news to anyone who patiently held out of paying $5 to rent the film as it will be coming to Netflix.

According to The Hollywood Reporter, Netflix will be releasing The Interview on its streaming service to U.S. and Canadian subscribers beginning this Saturday. That’s just 30 days after the film was supposed to hit theaters.

Sony Pictures Entertainment also revealed that the film has generated more than $40 million in digital sales since its release in addition to the $6 million it has earned in limited theatrical release.

When it’s all said and done, this movie might be remembered more for its accidental test case on studio film distribution rather than it’s controversial satirization of a totalitarian government.

So thanks North Korea and the anonymous hackers. You may have inadvertently started a whole new business model for already rich movie studios. God bless America. And capitalism.

It seems to me that the Star Trek series has sort of been lost in the blockbuster franchise shuffle. It was a full four years until we got a sequel to the fantastic 2009 reboot and while Into Darkness was a hit critically and financially, the fanboys didn’t like it and the domestic box office take was $30 million less than the original.

To make matters worse, director J.J. Abrams decided to jump ship (Puns!) to another giant sci-fi franchise with Star in the title. Now who was going to direct the third film? First it was announced that Roberto Orci, a writer and producer of many big-budget properties, including the first Star Trek, would helm the movie, but he had exactly as much directing experience as me.

Then a month ago it was reported that Orci was not only departing the director’s chair, but that his draft of the script would not be used. So now what? Simon Pegg should add some fanboy enthusiasm to the ‘Star Trek 3’ script. | (comicbookresources.com)

Well, Paramount has their experienced director in Justin Lin (Fast Five) and now they have a new team writing the script and one of them is a familiar face.

Simon Pegg AKA Scotty and Doug Jung of TNT’s Dark Blue and the Cinemax show Banshee are now tackling writing duties on a new version of the script. Pegg might seem like an odd choice, but consider he co-wrote Shaun of the Dead, Hot Fuzz and The World’s End with director Edgar Wright and I’d say all of those films turned out all right.

You could argue those movies were more in Pegg’s wheelhouse plus he was writing them with his longtime buddy in Wright, but remember that Pegg is a major part of the Star Trek franchise and he’s smart and he’s a nerd. I’d say that pretty much qualifies him as a good man for the job.

The clock is ticking as Star Trek 3 is set to hit theaters on July 8, 2016 but with this news, it seems like the Starship Enterprise might be back on the right course. Again with the puns?

About a week ago I was at work on my lunch break and as I was eating I saw a commercial for the new film Project Almanac which is a found-footage movie about teens discovering a time machine and the ramifications of changing things from their past.

During the commercial, footage of an airplane crash appears and the trailer alludes that the character’s actions in the film caused a ripple affect which lead to the plane going down. But the footage they showed was of an actual B-52 that really crashed and killed four people in 1994.

As I was watching the footage I began talking to one of my co-workers about this very topic (Using tragic footage of real events in a movie) and how that just didn’t seem right. Almost nothing offends me I told my co-worker, but anytime a movie used a terrible event, like 9/11 for example, and included it in its plot in an almost throw-away fashion just to up the stakes, I found that to be a little offensive.

Well as it turns out, other people, including those directly affected by the B-52 plane crash from 1994, had the same reaction and it has lead to a change in the film.

Producer Michael Bay issued an apology for the footage being used and said that Paramount Pictures would have it removed immediately.

Bay initially thought the two seconds of plane crash footage used was a visual effect, but was upset to learn that first-time director Dean Israelite had used real crash footage.

“Well, unfortunately a very bad choice was made to use a real crash instead of creating a VFX shot, without realizing the impact it could have on the families,” Bay said in a statement to the Air Force Times.

“I have asked Paramount Pictures to remove this shot immediately from the picture. I want to also extend my deepest apology to the families, and also to the U.S. Air Force.”

I just thought it was weird to talk about this very subject and just a few days later read about it making the news. Glad to see other people are paying attention.