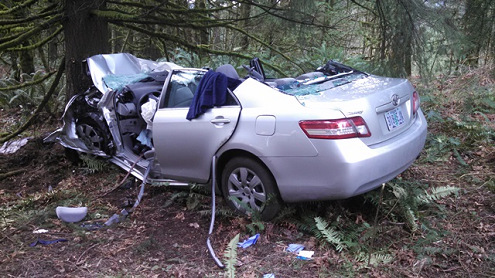 Oregon State Police troopers are continuing the investigation into this mornings fatal traffic crash on highway 26 near milepost 44.5 in Washington County.

Preliminary information indicates that shortly after 9:30 a.m., a silver 2010 Toyota Camry was eastbound on highway 26 when for an undetermined reason it veered off the roadway and into a tree. The driver and front right passenger were transported via air ambulance to OHSU with serious injuries. The right rear passenger, identified as TERRY L. HIDY, 56, of Seaside, was pronounced deceased at the scene.

Both lanes of travel were blocked during while the air ambulance landed. The Oregon Department of Transportation (ODOT) has arrived at the site and reopened one lane of traffic with flaggers.

OSP is being assisted by ODOT, the Washington County Sheriff’s Office and the Banks and Forest Grove Fire Departments.