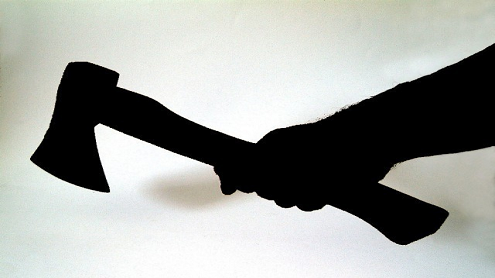 A bulldozer operator called 911 to report that a man had crawled onto his moving machine and was swinging an axe. This bizarre incident occurred today around  3:00 p.m.at Brown Island Demolition Landfill, located at 2895 Faragate Avenue South, in Salem.

The operator locked himself inside the cab of the piece of heavy equipment and waited for deputies to arrive. When deputies arrived they found Dale Gerner, age 56, a transient from the Salem area. Mr. Gerner had dropped the axe, but was armed with a knife. Deputies challenged Mr. Gerner, he complied with all of their commands and he was arrested without incident.

Mr. Gerner told deputies that he was tracking a cougar in Minto Brown Park, when he began being chased by hunters with dogs. Mr. Gerner stated the hunters climbed a tree and racked a gun so he made the decision to enter the landfill by climbing the barbed wire fence. It was very apparent to deputies on scene that Mr. Gerner was in crisis and suffering from some type of mental health condition.

Although he was arrested and transported to the jail for the crimes of menacing, trespassing and disorderly conduct, members from our Crisis Outreach Response Team will attempt contact with Mr. Gerner and assess his mental health needs.

Currently there are no booking photos available of Mr. Gerner.