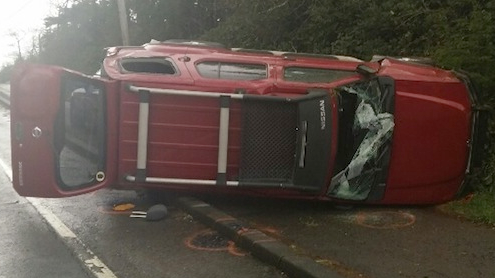 On February 8, 2015, at 10:39 a.m., OSP troopers were dispatched to a single vehicle rollover crash on Highway 240 near milepost 6. A 2002 Nissan Xterra, operated by DAVID CONN II, age 46, from Coos Bay, was northbound on Highway 240 near milepost 6 and for unknown reasons went off the roadway onto the northbound shoulder. Once on the shoulder the Nissan collided with a dirt bank and rolled at least one time coming to rest on its side.

Emergency responders extricated CONN from his vehicle and transported him to Bay Area Hospital where he was pronounced deceased from injuries sustained in the crash.

CONN was wearing safety restraints at the time of the crash and was the only occupant in the vehicle.

Highway 240 was closed for about thirty (30) minutes and was opened to one lane for several hours while investigators completed the investigation.