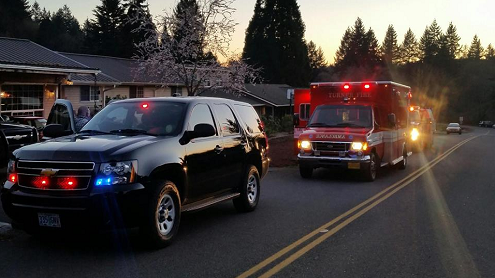 Feb. 28, 2015 at about 5:30 p.m., the Turner Police Department and the Marion County Sheriff’s Office responded to the reports of shots fired inside of a residence, near the 5400 block of Val View Road SE in Turner.

When officers and deputies arrived family members informed them that Jared Holm, age 22, of Turner was inside of his bedroom, intoxicated, suicidal and armed with two handguns and one shotgun. Prior to police and deputies arriving Mr. Holm had fired at least one round inside of his bedroom, prompting his family to call 911. Hearing the call, members of our Mobile Crisis Response Team responded to the scene.

The Mobile Crisis Response Team is a deputy and mental health professional who are trained to respond to incidents when people are in crisis. After arriving on scene deputies, officers and MCRT were able to successfully negotiate Mr. Holm’s surrender without using force.

Mr. Holm has been transported to the Salem Hospital where his mental health can be evaluated and treated. Mr. Holm could face criminal charges for his discharging of a weapon inside of the city limits of Turner. All criminal charges are being handled by the Turner Police Department.