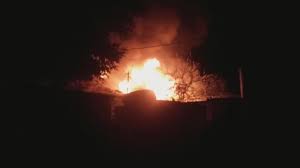 A Springfield family lost their home to a massive fire Tuesday night.

“Our family, not only suffered a tragic loss once, but twice within the past month” 15 year-old Crystal Lattymer explained. “My father was killed in a tragic car accident a couple of weeks ago and Tuesday night’s fire just gave us another set back; now we’ve lost our home,” she said.

Lattymer says they are receiving help from the American Red Cross after the fire.

Fire investigators say the fire was caused by a deep fryer inside the residence. In all the fire caused more than $130,000 in damages to the residence located at the 1100 block of 39th Street in Springfield. Police say that no one was injured at the time of the fire and all seven family members were accounted for.

Firefighters were initially hampered in their efforts to put out the fire.  Arcing powerlines overhead forced the firefighters to delay their initial attack on the fire until a crew from the Springfield Utility Board could respond to the scene and shut down the power.  The fire not only destroyed the home, but also displaced seven people from the fire, fire investigators said.

Lattymer’s only wish as her 16th birthday approaches was to have her home back as it was before the fire took place.