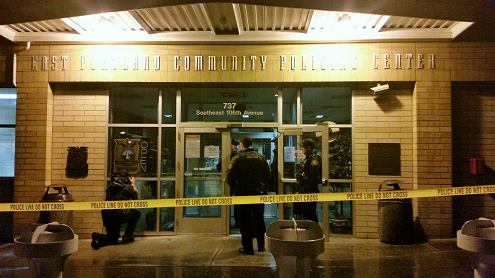 On Saturday March 14, 2015, at 11:53 p.m., Portland Police officers responded to the report of a large party of teens letting out of the East Portland Community Center, located at 740 SE 106th Avenue. The Community Center is across the street from the Police Center.

Officers inside East Precinct Police Center could hear people pounding on the front doors and windows of the precinct. Two officers went to the front doors of the precinct to see what was happening outside and just as they opened the doors, they heard gunshots and a 17-year-old male ran inside asking for help, saying he’d been shot at by someone.

Seconds later, the officers saw an armed teen fire another shot towards the South (not towards police) as he walked by the front doors of the precinct. The suspect was walking with a large group of teens as he walked northbound towards Stark Street. Officers shared suspect information via radio and followed at a distance until cover officers could arrive and take the suspect into custody after he got rid of the gun. Officers located and seized the gun as evidence.

Officers from Central and North Precincts and the Gang Enforcement Team (GET) responded to assist with preserving the crime scene and managing the crowd of unruly teens. Officers located one suspected bullet strike on the front of the precinct.

The suspect, 16-year-old Dontae Eugene Mathis Jr., was arrested and lodged at the Donald E. Long Juvenile Detention Hall on charges of Attempted Murder (Measure 11 crime), Attempted Assault in the First Degree, Unlawful Use of a Weapon, and Discharging a Firearm in the City.

GET investigators believe both the suspect and intended victim are involved with rival gangs.

Investigators believe that many eyewitnesses may have left the scene without talking to police.

A photo of the crime scene at East Precinct is being released publicly.

The Portland Police Bureau Gang Enforcement Team and Gun Task Force are continuing to actively investigate gang and gun crimes in the City of Portland.

Anyone with information about gang and/or gun crimes in the City of Portland is encouraged to provide information to the Portland Police Bureau’s Tactical Operations Division at (503) 823-4106.

Tips on gun crimes can be emailed to GunTaskForce@portlandoregon.gov.

Crime Stoppers of Oregon is offering a minimum $250 cash reward to anyone who reports a convicted felon or a juvenile in possession of a firearm and tipsters can remain anonymous.

Leave a Crime Stoppers tip online at http://www.crimestoppersoforegon.comtext CRIMES (274637) and in the subject line put 823HELP, followed by your tip, or call 503-823-HELP (4357) and leave your tip information.

Visit http://www.tipsoft.com to download the Crime Stoppers App for the iPhone or Droid.