Oregon Ducks On The Diamond: Softball Ranked Number One, Baseball Falls from Polls 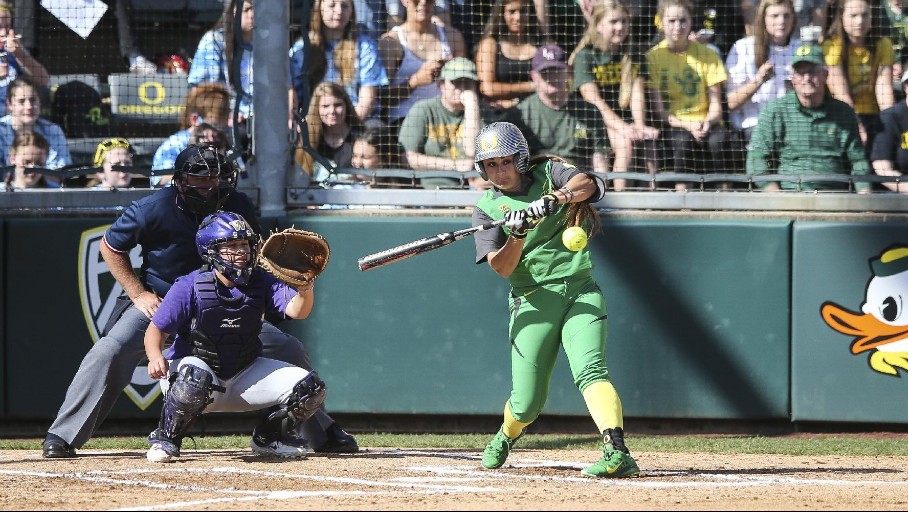 The Oregon Softball and Baseball teams appear to be headed in different directions this season, at least to this point. Softball just reached the number one ranking in two national polls, including the USA Softball poll. The Oregon Baseball team dropped their last three games in the Desert in Arizona to fall out of the National rankings after a promising start to the season.

Cheridan Hawkins has again flexed her muscle for the Softball team and is off to a 15-2 start to the season. Her ERA is 0.43 after giving up her first two runs of the year this past weekend against Washington at Howe Field. She has racked up three Pitcher of the Week honors from the Pac-12 Conference for her performance on the mound this season.

Hawkins has a perfect game, a no hitter and several two hitters this season for Oregon. Her two losses on the year came against Florida, who the Ducks hope to see again in the post season. Oregon is not only solid in the circle, but also on the basepads.

The leader for Oregon at the plate is Geri Ann Glasco, who is currently hitting at an .800 clip the last four games. She hit four home runs on Sunday against Washington, just the third Oregon player to ever reach the feat in a single game. Janie Takeda is the leader at the plate, but is currently out of the lineup after re-injuring her shoulder in the second game against Washington on Saturday. She is currently day-to-day. The Ducks Softball team takes to the road this weekend to take on UCLA on the road in Los Angeles for three games starting on Friday night,

The Oregon Baseball team started out the season on a high note, reaching as high as eighth in the polls, but the month of March was not kind. The Ducks played seventeen games and won just seven. The stretch does not get easier this week with five games in five days starting on Tuesday with home game against Portland. Oregon heads to Hillsboro to face Seattle on Wednesday before a three game weekend series starting on Friday night hosting Michigan State.

Mitchell Tolman and Matt Eureste lead the team on Offense and have for the most part this season. Both are hitting around the .300 mark. One area where Oregon is not having a problem is hitting. The area that is the issue is getting runners to score. In the series with Arizona lat weekend Oregon left over ten runners on base in the series and were unable to come away with a W.

Pitching, which started out strong for the Ducks, has faltered of late. From the Starters to the Relievers opposing hitters are getting on base. The one area that has played well of late is the back end of the bullpen. In the finale with Arizona Ducks pitching struck out seven in the final two and a third innings.

Oregon will look to take that momentum into this week against Portland on Tuesday and Seattle on Wednesday before facing Michigan State from teh Big Ten at PK Park this weekend.