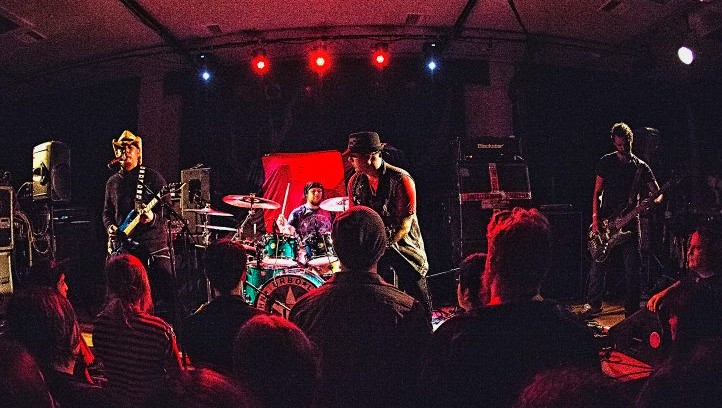 A kick ass group of guys, Black Powder County got their start in early 2012 and moved forward very quickly.  Tim, guitar/vocals for the band said they wanted a band that would explode onto the music scene and with original songs like “When The Devil Knows Your Name”, “Rain”, “Blackberry Wine” and “Ledfoot”, explode they did! First time I saw Black Powder County perform was when they opened the Adelitas Way and Red tour show at Wow Hall. I was totally blown away by them. With the start of each song there was this feeling you get when you know something big is about to happen but not sure what it is. They rocked the place with the explosive energy that their name expects. Australian born Tim “Decoy” De Quilettes, who moved to the United States in 2004 had this to say, “We were all looking for the same thing and after years of playing the pub/club cover scene with other bands, we each needed to scratch that itch of creating our own music, but that meant getting the right group to achieve that goal.That finally happened when we found one another and it was an instant click, like a Black Powder explosion. We were all looking to get back that same feeling we had when we first started making music, which was writing and creating our own sound to share and capturing that elusive feeling of success along the way. In the bio from Black Powder County website Jake Strasheim says “We set out to create music that we enjoy and can feel proud of playing, music that the artists we like would want to listen to. We don’t want to be tagged as a copycat or try or want to keep up with the Joneses or conform to somebody else’s ideas of how we should be. That’s when you can lose focus. So we’ve just done what we feel is right and try to have a great time doing it.”  Tim”Decoy” says they want songs that speak to the fans, that are not only riveting rock but also ballads that will make the ladies swoon. Bass player Manny Narkrong for Black Powder County says “Our music is very aggressive and in your face right out of the gate”

EDN: Who writes the bands songs?

Tim: Typically the lyrics are written by Jake and myself and we all work together on the music. I guess you could say the writing process is a collective collaboration.

EDN: Tim how and when did you get started in music?

Tim: Both my parents were professional muscians so I was born into it, in fact my mum went into labor with me during a gig she had. I started drumming on ice cream containers at 18 months and got my own kit at 4. I started performing in a side group my mum had at 6 years old. I played drums up until I was 15 when I was given a guitar for my birthday because my mum was sick of seeing me use a Cricket bat with drawn on guitar strings and headbanging to AC/DC and Guns N’ Roses. I’ve been playing guitar for over 20 years now. EDN: Do you have advice for making it happen in the world of rock bands?

Tim”Decoy”: “To make it you have to have a plan and then follow it… find members with the same commitment, practice hard and most of all have a bloody good time!”

They knew what they wanted and set out to get just that.

With Black Powder County opening the show for Adelitas Way and Red at the Wow Hall a few weeks ago, and in Aug. they hit the road to perform at Montana’s favorite rockfest, Rockin’ The Rivers Music Festival along with Quiet Riot, Skid Row, Autograph, Theory Of A Deadman and many other bands. Sunday Aug. 9th. BPC will be rocking  Lebanon Or. at Guitars Under The Stars Music Festival, they are on their way up.

EDN: Where do you see the band in the next year?

Tim: I see BPC continuing to move forward at an accelerated pace, writing, recording, touring. Countinuing to get the opportunities to perform with national acts & playing the festival/concert circuits across the USA and abroad. If all goes as well as plan we plan to do some dates in Australia where I’m from sometime next year.

This is not your first cup of coffee in the morning, Black Powder County is your triple shot of espresso straight out of the machine! Wake up and ROCK!

If you get a chance to see them… DO IT! This band is explosive. Ka-BAM! Thanks to you Tim “Decoy” De Quilettes and Black Powder County for taking the time to chat with us. Go get’em boys!

Black Powder County’s EP is called “The BPC Syndicate” and is available on Itunes and Amazon.com.