The temperature was hot and so were the bands. 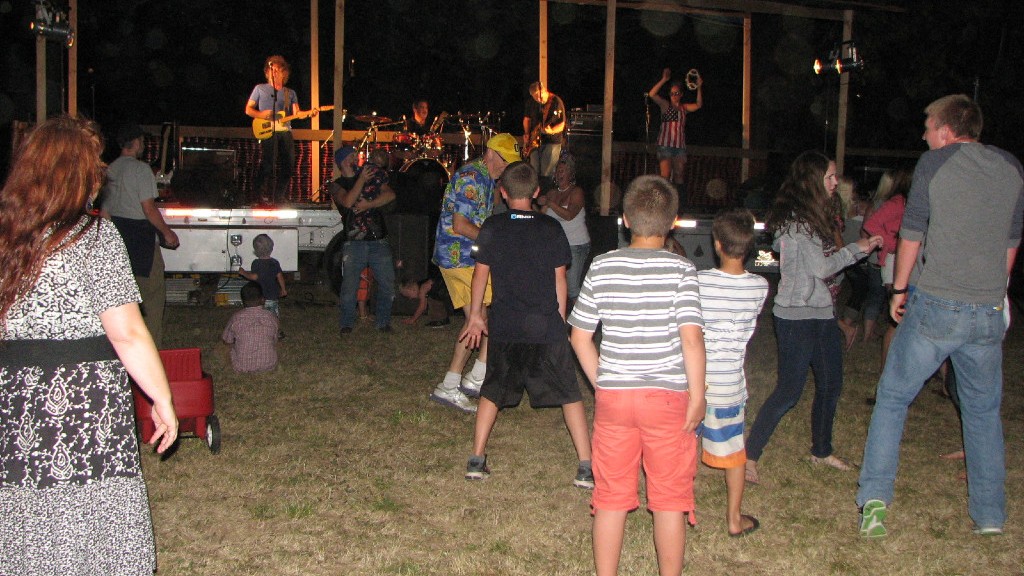 It seems like only a year ago that I wrote about the Independence Day Celebration at Dexter Lake State Park. As a matter of fact it was a year ago. Time does fly by doesn’t it? Those of us who don’t live in air conditioned homes really appreciated sitting in the shade of a small tree near the lake. Some Of The People At Dexter Lake | Photo by Tim Chuey

The lake breeze was really refreshing. After record temperatures in Eugene of 101 degrees then 100 degrees it was great to be only in the lower 90s for the day. It stayed overcast for a good portion of the day which really helped to keep the temperature down, By the time the sun pushed through the clouds it was already on its way to setting. Shelter From The Sun (Background And Right) | Photo by Tim Chuey

The yearly event was sponsored by the Eugene Daily News (EDN), Lane County Mug Shots and the Dexter Volunteer Firefighters Association. People brought picnic blankets, chairs, tent canopies, whatever it took to have a place to sit comfortably on the grass for the day. Fun On The Water | Photo by Tim Chuey

There were lots of things to do. Some people floated on the water in boats, rode a jet ski, rafts or inner tubes while others chose to swim in the water. Keeping Cool With Her “Friends” | Photo by Tim Chuey

One of the big attractions of the day was the concert stage (more like an outdoor oven for the performers), though this year there was no black tarp as the back wall of the stage so it was much cooler for the performers. A total of 8 bands entertained the crowd with their various styles of music all day long. It was my “job” (actually great pleasure and a too much fun-for-words experience) to introduce the bands which is always a kick. “Koriolis Effect” was the lead-off band. This was their first performance at the Dexter lake celebration and by the way they were very well received everyone hopes they will return next year. “Axis Salvation” was next. They have been regulars at this gathering and even set up their own venders tent so they could sell their CD’s t-shirts, etc. You can go to the Axis Salvation web page. The Athiarchists With Rolling Stage | Photo by Tim Chuey

The next group “The Athiarchists” had quite a surprising entrance. They didn’t use the stage because they drove up in a truck that was their own self contained stage and band bus. The crowd really got into their raucous performance. They finished their set and drove off. Check out their website at: The Athiarchists.com. “Living the Dream” used the stage provided and kept the attention of the people despite all of the activities that were going on. You can contact the band at 808-684-5144. “Missing Mass” was Peter Almeida who calls himself “an unembedded, four-appendaged, multifaceted. one-man band. You can check out his music at: reverbnation.com/peteralmeida. “Unaltered” was next with a lively set of some original music. Then “Steel Wool” took the stage. This band has been one of the mainstays of the annual celebration. You can find then at: www.gwproj.com/steelwool.html. The Procrastinators | Photo by Tim Chuey

And finishing the evening of music was “The Procrastinators” with Kelly Asay EDN’s head man singing and playing guitar.

There were some picnic baskets prepared and laid out, but there were also some great venders there to provide food and drinks. The Dexter Volunteer Firefighters Association members sold their famous barbecued chicken, which was scrumptious. Red 5 Hot Dogs were in demand too.There were some other vendors with items for sale. Again I was honored to read Lincoln’s Gettysburg Address as I have done for a few years now. Then TR Kelly from the band Steel Wool performed an emotional version of our “National Anthem” and the crowd enthusiastically applauded when she completed the last note. The grand finale was the fireworks, display executed perfectly by members of the Dexter Volunteer Fire Department, which was quite spectacular as expected. And, of course, a very big “Thank You” to all of those who came out to Dexter Lake State Park to celebrate Independence Day with us. I can’t wait for next year. It should be interesting since July 4th 2016 is a Monday. If it is possible next year will be even better.