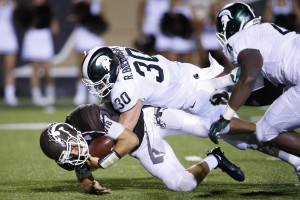 KALAMAZOO, MI – SEPTEMBER 4: Zach Terrell #11 of the Western Michigan Broncos is sacked by Riley Bullough #30 of the Michigan State Spartans in the second half at Waldo Stadium on September 4, 2015 in Kalamazoo, Michigan. The Spartans defeated the Broncos 37-24. (Photo by Joe Robbins/Getty Images)

Beware the rematch. Among two good teams, it almost always favors the team that lost.

In the only  nonconference game this season between two Top Ten teams, ESPN Game Day will be in East Lansing for Saturday’s Oregon vs Michigan State clash. The Spartans are bringing in 200 recruits for official and unofficial visits.

While Ducks fans have their feathers aflutter over some spotty pass defense last weekend against Eastern Washington, Mark Dantonio and his staff have issues of their own from a 37-24 win over Western Michigan. In their tune-up against a directional school the Men of Sparty gave up 170 yards on two kickoff returns, and 5th-year senior Connor Cook completed less than 50% of his passes, a decidedly non-Heisman debut for a three season starter that’s won three bowl games and a Big Ten Championship.

Oregon looks improved in the kick return game, with Byron Marshall averaging over 30 yards a return on three kickoffs last week and Bralon Addison back to return punts. Michigan State slipped last season in that area, so it’s a possible vulnerability they’ll work hard to correct this week.

The MSU players say they weren’t ready for Oregon’s tempo last year, and since then they’ve faced Ohio State and Baylor in big games. Tempo and conditioning were a big emphasis in fall camp and summer workouts.

The Ducks were porous on pass defense against the Eagles, but WMU’s Zach Terrell threw for 365 against the Spartan defense, who say they are deeper this time around, pumped to show last year’s late third-quarter collapse in Autzen Stadium was an aberration.

In addition, MSU is healthier at running back this year. In last season’s road game 1000-yard rusher was nursing an ankle injury while back-up Nick Hill played with a 100-degree temperature. Thomas Boyd of the Oregonian points out this time the host Spartans have a healthy running back stable that includes Madre London, freshman LJ Scott fall and Delton Williams. All three are talented and fast.

Playing against an undersized offensive line from the Big Sky, the Ducks dominated the line of scrimmage in their opener, holding Eastern Washington to 111 yards. Might not be so easy in East Lansing. State boasts five returning starters on the o-line. In the preseason Athlon Sports rated them the #2 unit in the country after giving up just 11 sacks last year while averaging 5.2 yards a carry on the ground. Left tackle Jack Conklin and center Jack Allen lead an experienced group with size and physicality, a much tougher test for Oregon’s front seven.

Dantonio’s teams can be counted on to be disciplined, hard-hitting and aggressive. Cook is 24-3 as a starter, second all-time in school history behind Kirk Cousins, who notched 25 wins.

A lot of it comes down to Vernon Adams’ shaken noggin and bruised hand. Will he be full-go on Saturday? He insists he will be. His loose, confident style will help him and his team approach a big road game in just the right way. Oregon needs him healthy to have their best chance to win.

“This is a huge game,” Adams said Monday to the Oregonian’s Andrew Greif. “They’re trying to get revenge from the last year’s team. They’re playing at home. I can’t take no days off and got to keep going strong.”

College Football: Who to Root For — and Against — in Week 2

The 2021 NBA All-Star festivities are all about recognizing and supporting historically Black colleges and universities,

Oregon picked up the series win with the doubleheader sweep