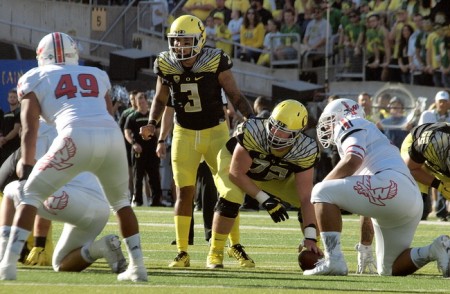 Oregon quarterback Vernon Adams return to health has sparked the Ducks to five straight victories heading into the Civil War.

It’s purely improvisational yet somehow it looks like a well-choreographed ballet. Plays that are reminiscent of the ones that were drawn up on the palm of your hand on a playground as a kid seem to have come to life at Autzen Stadium. Only three months have passed since Vernon Adams Jr. officially became a Duck after passing a math test required for a transfer from Eastern Washington. In that short time, Adams’ exciting scramble-like play behind the line of scrimmage has earned him the respect of his teammates, coaches, and he seems to be doing just fine filling the shoes of Heisman Trophy Winner Marcus Mariota.

Adams Jr. performance since returning from a broken finger has lead the Ducks to five straight wins, most recently a 48-28 victory over South contender and then 24th ranked USC. Where number three threw 6 touchdowns passes against his favorite childhood team. No other opposing quarterback ever in the storied 94 year history of Trojan football has accomplished that. Adams had always dreamed one day of wearing a USC uniform and while that dream didn’t entirely come to fruition; he certainly has left his mark on a day he never imagined was even possible.

“Definitely not, being a SC fan, you know, growing up being from that area, it’s an awesome feeling,” he said after Saturday’s win. “I’m so happy for the guys in that locker room, the rest of the seniors. It’s a great feeling.”

He was perfect. Almost.

Besides an early interception on a scramble play intended for Bralon Addison on Oregon’s first drive of the game in the end zone, Adams lamented, “That makes me so upset.” Adams responded by spreading the love and found 6 different receivers for touchdowns on the day while making the USC defense look silly at times. He finished 20-25, for 407 yards —that’s more touchdowns than incompletions earning him Pac-12 Offensive Player of the Week honors and receiving national recognition and being named the FWAA’s national offensive player of the week.

“Vernon is a great player. With the ball in his hands, he does a lot of special things. A play can never go wrong with him. Kind of similar to Marcus (Mariota) but Vernon is never looking to run the ball, you know, Marcus would take off running and get the first down,” said Charles Nelson who caught a 26-yard touchdown strike to put the game out of reach for the Trojans. “Vernon is always looking to throw the ball, find open receivers and wait. He’s just a great quarterback.”

Adams’ six touchdowns tied the UO school record and he is one of eight Ducks to break the 400-yard barrier through the air. The Ducks’ best passing performance of the season came as the program’s best passer, 2014 Heisman Trophy winner Marcus Mariota, watched from the sideline, where he gave Adams advice between drives.

“He just told me to have fun out there, stay confident, and let lose,” Adams said.

It’s hard after these past performances to wonder, “What if?” What if Adams was healthy all season if the conversation surrounding this Oregon team would be any different.  When asked on Saturday night, if he would have been able to play at this level in those first six games if he were healthy. He responded simply and without a doubt, “Yes.”

His teammates agree, “I honestly think if Vernon is healthy all season, if our defense is healthy all season, we might be talking about a big time playoff run right now. But we can’t worry about that, we are where we are,” said Bralon Addison who caught a first quarter touchdown pass of 48-yards and ended up leading all receivers with 105 on the day.

While Adams admits he wishes he had more time at Oregon, that’s not the path that was laid out for him. Instead of focusing on what could have been, he continues to live in the moment and take this season all in as it winds down. And being able to share it with his youngest and biggest fan, whom he proudly carried off the field and into the tunnel on Saturday.

“I can’t wait to tell my son about this later on in life,” he gleamed.

A California loss to Stanford later Saturday evening ended Oregon’s hopes at a North bid in the Pac-12 Championship game. But, there’s no time to spend on “what if’s” Adams has turned his attention to finishing out his short but quickly storied career at Oregon in the 119th Civil War.

The Ducks look to win eight straight on Friday when No. 18 Oregon (8-3) host Oregon State (2-9) at Autzen Stadium. Adams is no stranger to the Beavers. The graduate transfer led Eastern Washington to a 49-46 victory in 2013 where he passed for 411 yards and four touchdowns and ran for 107 yards and two scores.

From an Eagle to a Duck, this kid keeps flying.