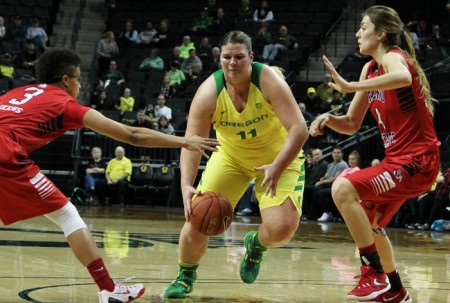 Maite` Cozorla’s 20 points and nine assists led the way for Oregon and the Ducks throttled the Fresno State Bulldogs 84-59 in second round action of the WNIT Monday evening at Matthew Knight Arena.

Lexi Petersen (19 pts.), Lexi Bando (15 pts.) and Kat Cooper (13 pts.) joined Cazorla in reaching double figures in scoring. Playing against her former team, Jacinta Vandenberg – filling in for the injured Jillian Alleyne – had one of her best outings of the year with 8 points, 10 rebounds and five assists.

Oregon never trailed, building a 12 point lead at 21-9 when Cooper hit a trey with 2:28 left in the first quarter.

The Bulldogs cut the margin to within six points in the closing moments of the first half only to have Petersen hit a lay-up as time expired and then surrendering 10 straight points to the Ducks in the early moments of the third quarter.

With an 18 point lead was off and running, eventually expanding the margin to as many as 28 points before settling for the 25-point final margin of victory.

The Ducks shot the ball particularly well, hitting 31 of 55 attempts for a 56.4% shooting mark, including a stellar 13-20 from behind the arc.

“Obviously we shot the heck out of it tonight,” said Graves. “But I think that came from really good execution. I thought the third quarter, especially when we broke it open, that’s as good of basketball that I’ve ever gotten to coach.”

With the win, Oregon improves their season record to 22-12 and advances to the third round against Utah. The Ducks beat the Utes twice in Pac-12 play, but will be facing Utah without Alleyne, who had big games in both outings.

“We beat them twice,” Grave said. “Both were really good games. Jill had great games in both, so we’re going to need someone else to step up”