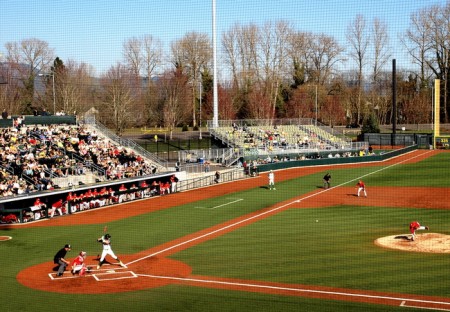 If only the Ducks could have saved a couple of their runs in Friday’s 15-1 series opening win over UC Santa Barbara for Saturday’s game two. After 13 innings of scoreless ball, the Gauchos pushed across a run in the top of the 14th inning to defeat Oregon 1-0 at PK Park.

After Friday’s slugfest, Saturday’s outing was a much different affair with neither team seemingly able to find a way to score a run.

Oregon starting pitcher Matt Krook held the Gauchos hitless for six innings, striking out 12 in the process. Six other Oregon pitchers combined to allow five hits and six walks before yielding a run in the top of the fourteenth inning on a hit batter, a walk, a passed ball and an opposite field single.

Two UC Santa Barbara pitchers held the Ducks to four hit, walking three with the Gauchos’ Kyle Nelson picking up the win after six innings of relief. Oregon’s Cooper Stiles was tagged with the loss.

Oregon’s record slips to 7-2 on the year while UCSB improves to 9-2. Game three of the three game set is schedule for 12:00 pm Sunday at PK Park.

The post Ducks Fall 1-0 in 14 Innings appeared first on DuckNews.com.