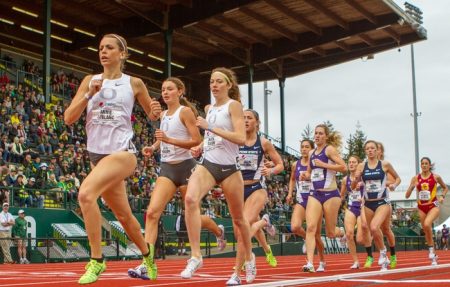 The Oregon women took the team title on the heels of a pair of dynamic results in the sprints, while the men were forced to settle for a tie with Penn State for top honors.

NCAA 800 meter champion Raevyn Rogers broke the tape first to give the Ducks the win in the 4X400 relay to secure the win for the women.

The 4X100 team – Jasmine Todd, Deajah Stevens, Hannah Cunliffe and Ariana Washington set a school mark with a time of 42.88.

Washington also set a meet record with an 11.34 clocking in the 100m to win that event as well.

Helped considerably by members of the Oregon football team, the Ducks also posted points in the 110m hurdles, 400m hurdles and the 4X100.

After missing a year due to injury, Devon Allen’s return to the track has been spectacular with first place finishes in both hurdle events (13.40 – meet record and 52.25, respectively) in addition to joining football teammates Kirk Merritt and Tony Brookes-James to win the relay with a time of 40.06.

Up next are the annual Oregon Relays, running Thursday, April 14th through Saturday, April 16th at Hayward Field.

Oregon and Portland Halted In 9th With Ducks Leading