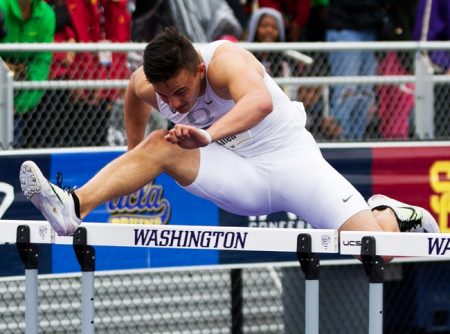 It’s ten straight for the men, eight for the women as the Oregon Ducks demolished the rest of the conference at the Pac-12 Track & Field championships at Husky Track in Seattle.

On the men’s side, footballer slash NCAA champion 110m hurdler Devon Allen was named the Athlete of the Meet to pace the Ducks to a 155.60 point total, easily outdistancing second place Washington’s 122.

The women did that and more, outpointing second place USC by 73.5 points, 185 to 111.50. Hannah Cunliffe was tabbed as the female Athlete of the Meet giving the Ducks an across the board sweep of the trophies.

The NCAA West Preliminary Round will be held in Lawrence, Kansas, May 26-28 with the NCAA Championships returning to Hayward Field June 8-11.

The post A Decade Of Champions appeared first on DuckNews.com.