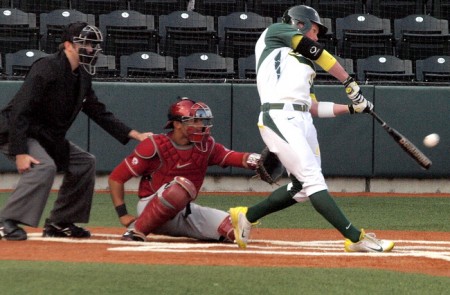 Washington State came into Eugene last week in last place of the Pac-12, but were just six outs away from taking the series 2-1 on Sunday at PK Park.

Down 7-5 in the eighth inning Oregon exploded with six runs then let Stephen Nogosek (2-1) shut down the Cougars in the ninth to preserve the 11-7 victory.

Daniel Patzlaff’s two-run single tied the game at 7-7 with the Ducks taking the lead for good on Kyle Kasser’s single that brought home two more.

Up 9-7, Jake Bennett smacked another two-run single to cap off the rally. It was Bennett’s fourth hit of the game, a career high.

Nogosek got credit for the win, his second of the year.

Starting pitcher David Peterson went 5.1 innings, striking out six with a walk but was undone by a pair of errors, a wild pitch and two passed balls.

The Oregon offense banged out 13 hits against five Washington State pitchers, three of them in the last third of the inning as the Ducks staged their rally.

Before continuing conference play at Arizona State next weekend, the Ducks will tangle with San Diego at Hillsboro Stadium Monday at 2:00 pm.

A pair of non-conference replacement games against Gonzaga on May 9th and 10th at PK Park is a late addition to the schedule. Both contests begin at 6:00.