A Great Way To End The Long 4th Of July Holiday Weekend! 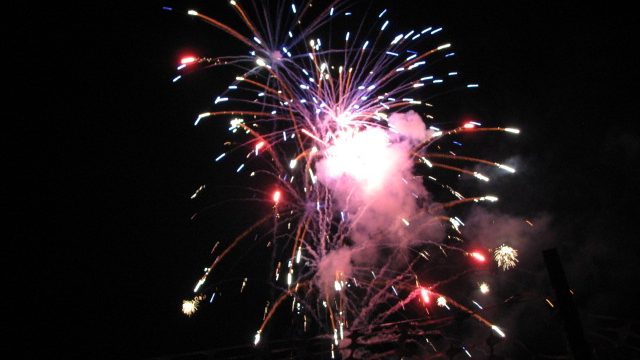 Some people may like to spend the Independence Day holiday quietly relaxing in their own back yard, but we are celebrating the birth of our country so I prefer a friendly crowd (estimated at about 5,000 people), great bands playing music all day and a fireworks display to end the evening. The early birds always get the best spots to set up their cooler, blanket, chairs etc. and they are usually in the shade of the few trees in the park.

The peaceful and cool Dexter Lake acts as the backdrop while the aroma of the Dexter Volunteer Firefighter’s Bar-B-Q Chicken wafts through the air stimulating your taste buds to make you get up from your chair and get in line for some great chicken.

There was a new activity that premiered this year called the “Old Coots on Scoots” Poker Run in which motorcycle riders were dealt a poker hand one card at a time as they rode from one adult “watering hole” to another receiving their last card at the celebration at Dexter Lake State Park.

These “Old Coots on Scoots” is comprised of older riders which raise funds to give sporting equipment, shoes, etc. to needy youth in the small towns of the area. You can find out more about their National organization by going to: oldcootsonscoots.net.

Just Look At Those Beautiful Machines | Photo by Tim Chuey

Another effort by the “Old Coots on Scoots” and motorcycle enthusiasts is Rebel Rally, A 501(C)(3) charity, which is an effort to raise money to help veterans and their families. Rebel Rally along with Western Beverage sponsored a beer garden and even had timed races on tricycles for those who purchased beer or wine at their booth with the profits going to the veterans and their families.Here is the Rebel Rally Facebook address: Facebook address.

Jennifer Brazil represented Rebel Rally and came up on the stage with me multiple times to give out prizes to those who patronized their booth.

Me Wearing My Favorite Hat | Photo by Suzanne Chuey

I am fortunate to have the best job at this big party by once again being the Master of Ceremonies. Welcoming the people and introducing the entertainment is so much fun. The bands start playing their 45 minute sets on the stage that is positioned so that everyone can hear the the music no matter where they may be.

The first band to perform was The Jazz Flute Project. They play swinging Jazz standards, bebop, soulful ballads, and Bossa Nova. You can check them out at their home page https://jazzfluteproject.com.

Next up Jason Cline, a native of North Carolina who just recently moved to Oregon. You can find him at:jasonclinemusic.com

Third on this beautiful day was Bodhis Zafa. Check out their Facebook page: https://www.facebook.com/bodhisZafa/.

The Men From S.U.R.F. (Secret Underground Retro Fraternity) were up next. They played many great surfer songs. Check out their home page at: menfromserf.com.

A band very familiar to this annual event came next Axis Salvation whose web page is axissalvation.com.

Last, but certainly not least, was the band PROCRASTINATORS led by EDN’s own Kelly Asay. They can be found at: theprocastinators

Here is where I performed my annual reading of Abraham Lincoln’s Gettysburg Address. To me, one of the most emotional and spiritually moving speeches ever made.

Nichole Stutesman (What A Voice!) | Photo by Suzanne Chuey

The last musical presentation of this patriotic event was the singing of our National Anthem by Nichole Stutesman who performed a very emotional rendition of a very difficult and historical piece of music.

The grand finale of the evening was the fireworks display. What makes that special is that we are close enough to actually see the fireworks being lighted and watch them take off, rise to their apogee and explode in the air right near us. The final volley of explosions always has the crowd cheering.

Keeping Cool Wading In The Water | Photo by Tim Chuey

And, of course, a very big “Thank You” to all of those who came out to Dexter Lake State Park to celebrate Independence Day with us. I can’t wait for next year. It should be interesting since July 4th 2017 is a Tuesday, so no long holiday weekend for most of us. If it is possible next year should be even better.

This event was two big for just one article. Next weeks Weather Or Not will feature the Sponsors, Vendors and others who made this celebration such a big success.