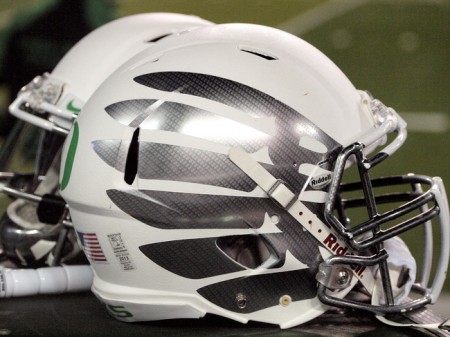 It was the only pass Justin Herbert wishes he could have back.

The lone inception of the entire night came in the middle of the double overtime period and gave Cal a 52-49 win over Oregon in what was a wild night in Berkeley.

Linebacker Jordan Kunaszyk stayed home and wasn’t fooled by Herbert attempting to look him off for a pass over the middle in what could have been a game-winning touchdown. But instead, Kunaszyk managed to tip Herbert’s bullet pass to himself to end all hope of an improbable Duck win.

The loss, however, was Oregon’s fifth straight and the Ducks (2-5, 0-4) are still winless in conference play with the prospect of a bowl game vanishing with every loss.

Although Herbert’s interception ended the game, the true freshman would be the last one anyone can blame for the Ducks’ most recent setback. The former Sheldon High School star threw for six touchdowns and 258 yards as well as rushing for 58 yards.

Oregon was down at one point 34-14 midway through the third quarter when Herbert brought his team back. After an awful pooch kick from Cal, the Ducks went 40 yards in five plays with Herbert finding Evan Baylis in the back corner of the end zone. Suddenly it was a two-possession game and the Ducks were right back in the thick of it.

That score also ignited the Oregon defense for the first time in several weeks. They held Cal to just three points for the entire third quarter and that let Herbert and the offense have a chance to rally. It was 34-28 when Herbert found Johnny Mundt in the end zone on a 12-yard pass play with 3:20 left in the third.

Cal was stifled again and Oregon was able to take a brief 35-34 lead on Herbert’s six-yard touchdown pass to Charles Nelson in the back of the end zone. Unfortunately for Oregon, the Bears offense seemed to waken up from its hibernation and came back with a vengeance.

Overall, the Cal offense was tough to slow down. Quarterback Davis Webb throw 61 times, completing 42 passes for 325 yards and five touchdowns. The Bears managed to run wild on the Ducks, gaining 311 yards on the ground.

Webb found tailback Tre Watson on a 14-yard touchdown pass and with the two-point conversion, Cal had a 42-35 lead. But Herbert answered with a 42-yard touchdown pass to Nelson as he streaked across the middle and sprinted for 25 of those 42 yards with just 3:15 left.

That was plenty of time for the Bears to drive down and score in order to win the game in regulation, which they almost did. Cal was able to set up a potential 41-yarder for kicker Matt Anderson, one of the best kickers in the country.

The Ducks were able to ice him two times before he missed the field goal wide left to send the game into overtime.

Oregon scored in the first overtime when Herbert found Jalen Brown for a 20-yard touchdown and the 49-42 lead. But Cal answered right away in five plays on Webb’s one-yard run.

The first half seemed to be a carry over from the game two weeks ago when Oregon was ran out of the building by Washington. Cal’s offense scored on five of its seven possessions to take a 31-14 halftime lead.

The Bears managed to run for 171 yards on their way to 320 total yards. Muhammad ran for 86 and Tre Watson ran for 73 in the first half alone.

Oregon was able to bring itself to within 24-14 on two nice drives after the Ducks fell behind 21-0. Their first touchdown came on a crossing pattern when Herbert found Brown over the middle for a 27-yard pass where the big tight end muscled his way into the end zone and extended over the goal line.

Cal extended its lead to 24-7 on a 37-yard Anderson field goal. But the Ducks were able to answer with another touchdown, giving themselves some hope. Oregon went 71 yards on eight plays that ended with a Tony Brooks-James one-yard run. The score was set up on Brooks-James’ 43-yard run down to the two-yard line.

Unfortunately for Oregon, the offense scored with just over three minutes left, giving the Cal offense plenty of time to drive 76 yards in 2:47 on 10 plays to score one more touchdown before halftime.

Cal did run all over the place in the first half, but Webb shredded the Ducks by going 21-of-30 for 149 yards and four touchdowns in just the first half.

The story of the first quarter was penalties and missed tackles, which added up to a 14-0 Cal lead. The Bears took a couple of drives to figure out the Duck defense, but once they did, it was easy to go down the field.

Oregon was penalized four times for 39 yards in the opening alone, and two of those fouls negated long runs that might have set up scores. Instead, the Ducks were floundering on offense with 49 total yards in the first 15 minutes of play.

On the other side of the ball, Cal was able to run with the rock with relative ease. The Bears rushed for 117 yards in the quarter with Khalif Muhammad racking up 81 of those yards early on.

Cal opened the scoring on a 13-play, 71 yard drive that ended with Demetris Robertson scoring on a 10-yard reception on a fade from Webb. The Bears made it 14-0 from a five-yard pass from Webb to Raymond Hudson.

Oregon now comes home next week to face Arizona State attempting to break the losing streak and somehow put its season back in the right direction. Kickoff is set for 2 pm on the Pac-12 Network.

Is Your Coach Helfrich Decision “Good-or-Good?”

If Damian Lillard gets his way, the Portland Trail Blazers will start