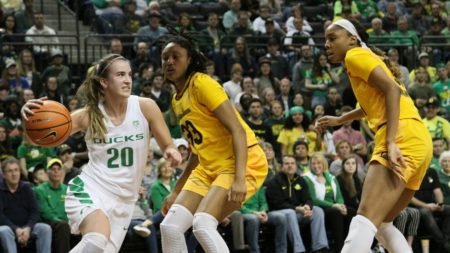 California came into Matthew Knight Arena ranked 25th in the country and a solid NCAA tournament team with a 15-7 record and an RPI of 33.

The Bears leave Eugene still a solid tourney team, but the Ducks made them look very ordinary. Oregon dominated Cal in the second and third quarters to come away with a 91-54 victory.

With the win, the No. 6 team in the nation keeps a hold of first place of the Pac-12 standings at 10-1 and 21-3 overall. The victory also sets up a huge match-up Sunday afternoon when Stanford rolls into town. The Cardinal are 9-2 in league action after beating Oregon State inside Gill Coliseum 60-57.

But Stanford is far from the Stanford of the past. Tara Vanderveer’s team is 15-8 overall after a tough non-league schedule.

As usual, Sabrina Ionescu led the Ducks with 28 points, 11 assists and five rebounds. Ruthy Hebard was unstoppable in the key with her 18-point, 11-rebound effort. Hebard was tasked to battle Cal’s Kristine Anigwe, who is one of the best post players in the country. But Anigwe was in foul trouble the entire night and was held to just six points to go with her eight rebounds.

After Ionescu and Hebard, the Ducks featured a balanced scoring attack with Satou Sabally’s 10 points, Mallory McGwire’s nine points and Anneli Maley’s nine points off the bench with a trio of treys.

Even with a nice 17-point halftime lead, Oregon couldn’t let up. Cal is a team more than capable of erasing a big deficit. Thankfully for the Ducks, they didn’t let up after the break to give the Bears hope. Oregon doubled up Cal in the scoring column in the third quarter, 26-13, including a 13-0 run towards the end of the quarter, to put the contest on ice.

The 72-42 margin allowed coach Kelly Graves to rest his starters for much of the fourth so they can start preparing for the Cardinal.

After a lackluster first quarter that saw the Ducks up only 16-11, Oregon exploded in the second period and took a commanding 46-29 halftime lead. The Ducks went on an 8-0 run and then a 9-0 run to put some distance between the two teams.

Oregon committed just six turnovers for the entire game and outrebounded the Bears 40-27. The Ducks also shot 51.5 percent for the game on 34-for-66 from the field, including 9-of-19 from long range. When they play that well, the Ducks are almost impossible to beat and Cal found that out the hard way.