You’ve Seen Them Fly, But Did You Know They Also Can Sail? 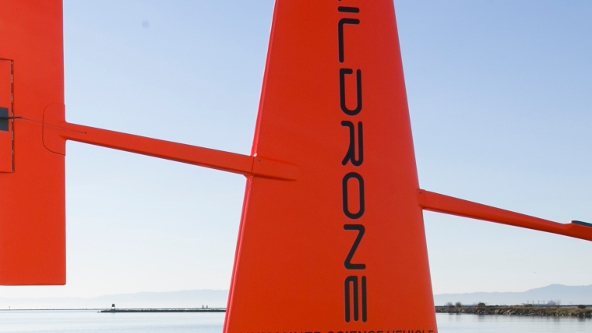 They have become very popular with both hobbyists and businesses. Amazon is working on a project to use them to deliver orders to their customers. Obviously I am referring to drones. Most of us have seen them flying through the air, but did you know they are also being used on the water? Yes, they are called Saildrones and they can aid scientists in their research. Saildrone In Alaska | Photo by Alaska Fisheries Service through NOAA

The company called “Saildrone” provides a service that is used by many in the scientific community who are researching various subjects related to the oceans of the world. Here’s how they describe their company. “Saildrones designs and manufactures wind and solar powered autonomous surface vehicles called Saildrones, which make cost-effective ocean data collection possible at scale. We are building the world’s largest high resolution ocean data sets, working with governments and private companies around the globe. We believe that better inputs in planetary models in turn yield better outputs and that the new insights gained in weather forecasting, carbon cycling, global fishing and climate change will have tremendous impact on humanity. ” Here’s their explanation of how it began. “The Saildrone wing technology was evolved over a 10-year period, driven by the research of Saildrone founder Richard Jenkins as he battled to break the wind powered, land speed record. He ultimately achieved that record in 209 (126.2 mph) before applying the wing technology to an unmanned sailboat which became Saildrone. The quest for speed and control, led to the innovation of a precise but low-powered wing system that makes the Saildrone possible. Efficiently harnessing wind-power to maximize the range and endurance of our drones is a key differentiator between Saildrone and other autonomus vehicles.” Sairdrone Research Route In The Gulf Of Mexico | Image by Saildrone.com

These Saildrones are unique due to the fact that they are autonomous, designed for long range and long duration missions, up to 12 months long, to collect ocean and atmospheric data. They can be launched from a dock and programmed to return to the same place when their task is completed. Drones can be held in a stationary position for long periods of time or run a complex survey pattern over a much larger area of the ocean. You might wonder how the data is received, but that is one of themes important features of the drones. They data can be collected and stored by the sensors or sent back to the base by use of a satellite transmission system.

The company has assembled a diagram of the Saildrone detailing the type and location of the sensor data being collected. Below is the list of the sensors with number and color coding to show what they are measuring. As you can see by the diagram above Saildrones are capable of collecting data from the atmosphere above the ocean water (red circles), at the ocean surface (green circles), and under the ocean surface (blue circles). The National Oceanic and Atmospheric Administration (NOAA) has increased its emphasis on studying the ocean-atmosphere interactions as to how they relate to weather forecasting in general and the development of hurricanes as just one specific example. The new knowledge we may gain with better understanding of how the the atmospheric disturbances interact with the ocean could unlock the keys to help better understand what is actually happening with our climate and why. Saildrone By The Golden Gate Bridge | Photo by Saildrone.com

There are others in the technical community who are working to improve data collection and I’m sure we will be hearing more from them soon.