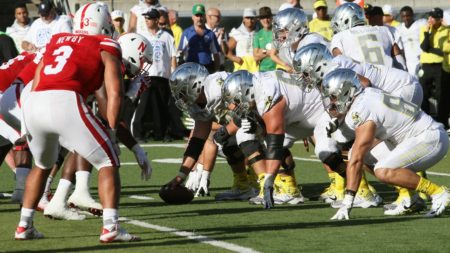 Oregon has an elite quarterback and thankfully for the Ducks, they have an elite offensive line to protect him as well.

The five offensive linemen that are expected to be in charge of keeping quarterback Justin Herbert upright isn’t exactly of the smaller variety. The expected starting line averages a robust 312.2 pounds. Junior center Jake Hanson is the “smallest” of the group at a mere 6-5 and 297 pounds.

Hanson will be flanked on either side by a lot of height and a lot of poundage that might seem like an SEC line instead of the usual flexible and more athletic Pac-12 lines.

These Ducks are not only big, but perhaps more importantly, experienced and they have a long history with the junior quarterback. Herbert and his line has chemistry, which can only help and turn into big plays and big wins for the Ducks in 2018.

Oregon is also expected to mix and match the offensive line this season, so listing linemen with specific positions, except Hanson at center, would be a useless task.

Junior Brady Aiello at 6-7 and 310 pounds Played in nine games at left and right tackle and started the final three games at right tackle. Aiello also played all but one offensive snap (219 of 220) over the last three contests.

Junior Shane Lemieux is 6-4 and weighs 317 pounds. He started all 13 games at left guard and extended his start streak to 25 games (all at left guard). Lemieux also played nearly 97 percent of the offensive snaps (939) and finished fifth among Pac-12 guards with a pass blocking grade of 82.6, according to Pro Football Focus. Lemieux also started all 12 games as a redshirt freshman in 2016, making him one of the most experienced linemen in the program.

Sophomore Jacob Capra is the most inexperienced linemen, but his off-season workouts may have propelled him to a starting spot. At 6-5 and 319 pounds, Capra played in six games and made one start, at UCLA. The majority of his 105 snaps played were at right guard, but also saw time at right tackle.

Junior Calvin Throckmorton is the most awarded linemen on the roster. He was a Pac-12 honorable mention last season and some see him as a possible First-team all-conference player in 2018.

Coming off the bench, Oregon definitely has some beef.

That includes the No. 1 recruit in the state of Oregon last season. Freshman Dawson Jaramillo is 6-5 and weighs 332 pounds.  Jaramillo should play right away considering he signed during the December early signing period. He was a four-star prospect and No. 127 overall, according to the ESPN300 and was the No. 10 offensive tackle in the class.

The bench also includes junior Dallas Warmack, a transfer from Alabama, who might not be on the bench for long. Warmack comes in at 6-2 and 336 pounds. He didn’t play last season in Tuscaloosa, but in 2016, he played in nine games. Warmack came to Alabama as a four-star recruit and top 300 prospect. Freshman Penei Sewell (6-6, 360), who also came into the program in December. Sewell was consensus four-star and the No. 1 recruit to come out of Utah.

Hazy, Hot and smoky weather returns for your workweek.