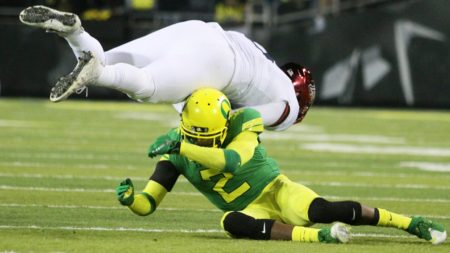 With experience and talent across the defense, Jim Leavitt’s crew could go from “very good” to “special” in a hurry and the Oregon secondary will be counted upon to lead the way.

Talented, but young the last two seasons the group took some lumps in the process. Responding to Leavitt’s scheme and tutelage in 2017, the Duck secondary improved greatly and nothing should suggest that improvement won’t continue in 2018.

Then Leavitt came to town and things started to change.

Oregon improved to fourth in the Pac-12 in total defense, allowing just 369 yards, a difference of 149 yards a game. They also were eighth in pass defense with 240 yards per game through the air and they picked off 15 passes from opposing quarterbacks.

If that trajectory of improvement goes on in 2018, it’s going to be mighty difficult scoring against the Ducks.

Graham more than held his own last season as a true freshman cornerback. Oregon has had a history of sticking true freshmen out there on an island the results haven’t been good. But Graham changed that narrative.

The Rancho Cucamonga, Calif. native played in the season opener last year and then proceeded to start every game since. Graham played on 824 snaps, which was the second-most by a true freshman in the country. He picked off three passes and was second on the team with 49 solo tackles and third with 62 overall tackles.

Lenoir was mostly a back up last season, but played in all 13 games. He was a highly-recruited player in 2016 as Rivals had Lenoir as the No. 1 athlete in the country for his class. The Los Angeles native managed 25 tackles, 17 solo and one interceptions. Oregon is expecting those numbers to take a major uptick this season.

Pushing Graham and Lenoir for playing time might be senior and JC transfer Haki Woods, Jr. At 6-3 and 201 pounds, Woods brings size to the cornerback position. He enrolled in January, but only has just one year of eligibility remaining. Woods recorded 45 tackles, 35 solo and five pass breakups for Pima Community College in Arizona. Woods was second-team NJCAA All-American last year.

Also enrolling early and vying to see playing time is true freshman Verone McKinley III. The Carrolton, Texas native was one of the top cornerback recruits in the country and was a four-star prospect. Nearly every major college wanted McKinley, including Alabama, Clemson, Georgia and Florida, plus every Pac-12 school.

At safety, the Ducks are solid there too as Ugo Amadi and Nick Pickett are expected to hold down the fort and keep opponents from catching the ball and if they do, receivers will have to pay a price.

Amadi is one of the best defenders in the country. At 5-10 and 201 pounds, the Nashville native has appeared in 38 games in his three years as a Duck, starting in 21 of them. He was also a Pac-12 Honorable Mention as a junior as he finished with 43 tackles, including 2.5 for loss and 1.5 sacks. Amadi also led the team with three interceptions with Graham.

As for Pickett, the 6-1, 200-pounder from Los Angeles played in 11 games last season and made three starts. He managed 22 tackles, including 10 solo.

Pickett will be pushed for playing time by true freshman Jevon Holland. The 6-1, 192-pounder from Pleasanton, Calif. was a consensus four-star recruit and the No. 2 athlete to come out of California as well as the No. 2 safety. Holland also arrived in December which will help him see the field earlier than most true freshmen.

Another four-star recruit that came to campus in December is Steve Stephens. The Fresno native is 6-foot and weighs 187 pounds. He was named the California Metro Area Conference Defensive Player of the Year in 2017 and recorded 53 tackles, including four tackles for loss and one sack, as a senior. Stephens also broke up 14 passes and led the team with four interceptions.