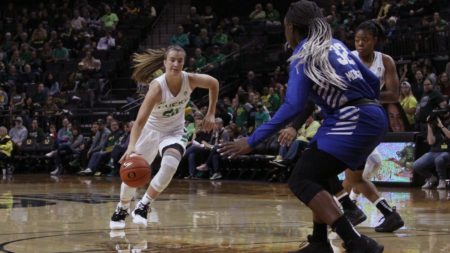 By no stretch of the imagination would a one for seven night shooting from the floor lead to a record setting triple-double for All-American guard Sabrina Ionescu but that is exactly what happened Sunday afternoon in Oregon’s 102-82 win over Buffalo at Matthew Knight Arena.

Not that the Ducks (4-0) were in need of her offensive firepower the way they were in last Saturday’s win over Syracuse when Ionescu drilled a pair of treys to erase a late six point deficit. Baskets weren’t an issue Sunday with all five starters recording double figures in scoring giving the Ducks the lead for all but 32 seconds of the game.

“It almost shouldn’t count,” Ionescu said of her NCAA record 12th triple-double. “But it was just nice to see everyone else step up. I wasn’t hitting my shots and I wasn’t producing much offensively, but it was nice to see Satou (Sabally – 20 pts), Erin (Boley – 15 pts), Ruthy (Hebard – 25pts), Maite (Cazorla – 15 pts) and even people off the bench, Morgan Yaeger, Lydia (Giomi) coming in there and producing for us offensively.”

Ionescu finished with 12 points, 10 assists and 10 rebounds, the last of which was secured with an offensive rebound with 1:22 left in the game.

“That’s what she does,” said Oregon head coach Kelly Graves. “That’s why she’s considered one of the best players in the country … for whatever reason she wasn’t in sync offensively with her shot.”

Oregon out rebounded the Bulls 35-23 and feasted at the free throw line, sinking 34 of 38 attempts.

The Ducks hit the road for a pair of games in the Saint Mary’s Invitational tournament, facing UC Riverside at noon on Friday to open, then squaring off against the host Gaels on Saturday at 2:00 pm. Oregon returns to Matthew Knight Arena to host Long Beach State on Sunday, December 2nd with the opening tip set for 2:00 pm.