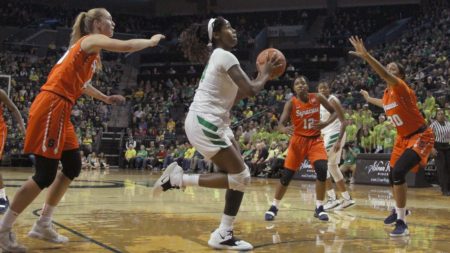 Trailing 67-61 with just more than two minutes left, Oregon’s Sabrina Ionescu and Erin Boley went back-to-back-to-back from behind the arc to give the Ducks a 70-67 lead inside the game’s last minute.

From there it was Maite Cazorla who hit four free throws down the stretch to cement the home opening win for the 3rd-ranked Ducks in a game Oregon head coach Kelly Graves likened to a “Sweet 16 game.”

Oregon was sharp in the early going, scoring in transition and shooting the three ball well enough to build a 15 point lead midway through the second quarter.

The Orange then dialed up a full court press and a zone trap trap in Oregon’s offensive end, narrowing the margin to 34-27 at the break and eventually knotting the game at 54 late in the fourth.

A pair of buckets pushed Oregon’s lead to four before Syracuse ripped off ten straight points taking their first lead of the game and bringing the crowd of 6879 to full voice.

As she has in the past, Ionescu took matters into her own hands. “I knew it was time to hit some big-time shots,” she said. “…my teammates got me the ball and as soon as I released it I knew it was going in … then Erin hit a really big one when it mattered, so I thought down the stretch we executed really well.”

Graves concurred, saying “…they kept their composure, made some stops and, more importantly, we hit a couple of timely threes … they kind of did that on the fly. Ruthy (Hebard) set a nice high ball screen and gave us a two on one advantage on the wing and in the corner. They made the right decision and more importantly they made the right shots. I thought that was well executed by these guys.”

Ionescu led all scorers with 26 points while grabbing 10 rebounds and dishing out five assists. Syracuse out shot the Ducks 40.3% to 36.5% , owned a 45-36 advantage on the glass and got 42 of their 73 points in the paint but Oregon turned the tide at the charity stripe, connecting on 18 of 25 attempts while Syracuse made six of seven.

“That was a good game, a good learning experience,” said Graves. “(Syracuse is) a good team – we knew they would be – and it’s great for us early in the season to play this kind of game.”

A road test awaits with the Ducks traveling to Ogden to face Utah State on Wednesday beginning at 6:00 pm Pacific time. The game will be available for viewing via the Utah State live stream. Oregon returns to Matthew Knight Arena on Sunday, November 18 to host Buffalo. Tip-off is scheduled for 2:00 pm.