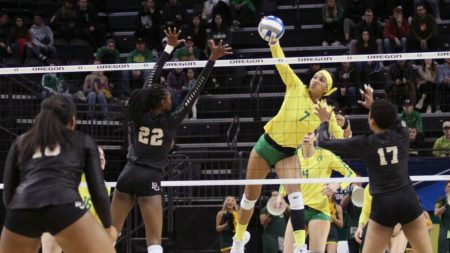 As it had been in Oregon’s opening round victory over the New Mexico State Aggies, senior outside hitter Lindsey Vander Weide again and again put balls on the floor for the Ducks when they needed a point or a side out.

Oregon opened the first set clicking on all cylinders offensively, taking a 20-9 lead before the Bears found their bearings, rallying back to within six points before Taylor Borup closed out the set with back-to-back kills.

Baylor flipped the script in set two. Tied at 5, the Bears outscored the Ducks 20-8 the rest of the way to even the match at a set a piece.

Round three was more of a toe-to-toe slugfest with Oregon never trailing after breaking a 2-2 tie, then grinding their way to a six to eight point lead down the stretch, Willow Johnson’s service ace wrapping up the set at 25-17.

Oregon picked right up where they left off in set four, taking an early lead and holding the advantage until late in the set when Baylor leveled the score at 20 then out pointed the Ducks 5-2 to send the match to a deciding fifth set.

“I hate fifth sets,” said Vander Weide. “But after we lost that fourth set we were saying ‘OK, we are not losing another one.’”

“It’s awesome,” she said. “I’m probably not going to be able to sleep tonight for a while. This is just great, especially with this team. I couldn’t have asked to do it with anyone else.”

“So proud of my team right now to get to go to the Sweet 16 and keep playing,” said Oregon head coach Matt Ulmer. “…We made plays at the end. Baylor played great, we fought back and forth the whole time.”

In her last appearance at Matthew Knight Arena Vander Weide was busy, taking an unheard of 60 swings and posting 21 kills to lead the Ducks. Willow Johnson added 11 kills and was again a weapon from the service line with three aces.

Oregon’s opponent in the round of 16 is yet to be determined, as is the time and date. All that is certain at this point is the Ducks are still playing and ready to take the show on the road.

Class 6A, 5A Oregon high school football playoffs statistical leaders through Round 4