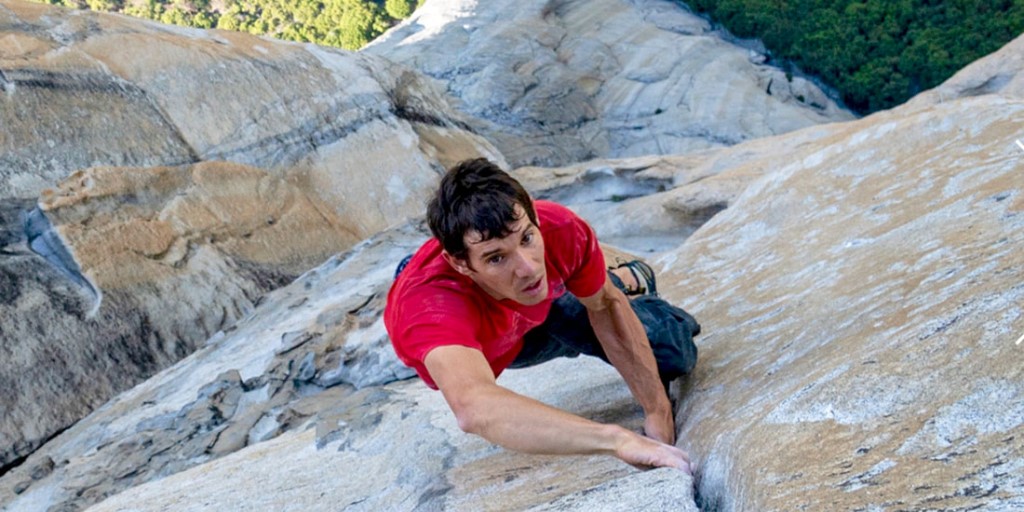 There’s a moment in Free Solo, the new documentary about free solo climber Alex Honnold, when fellow professional climber, Tommy Caldwell, compares free climbing to an Olympic sport. If you succeed, you win gold. The big difference is that if you don’t, you die. These are the stakes at play for Honnold.

He’s attempting to do what no one has done before; free solo climb (climbing without safety harnesses) up Yosemite’s 3,000-foot high El Capitan wall. But while everyone around him, including his girlfriend; Sanni, worry for his safety, Honnold expresses calmness and excitement that would beguile the average person.

Free Solo works best when directors Jimmy Chin and Elizabeth Chai Vasarhelyi focus on the climbing and Honnold’s methodical approach to ascending El Cap. Honnold performs several practice runs up the massive slab of granite and the filmmakers document his assessment of the challenge as if he’s a dancer working out the choreography. Whether it’s certain hand movements, feet placement or specific areas of the pitch on a climb, Honnold lights up when discussing the process.

But there is also a psychological aspect to the story the filmmakers have to analyze. Why would someone risk their life doing this? This is where the film falters somewhat. Honnold isn’t exactly a captivating figure when he’s not hanging off the side of a cliff. The doey-eyed free-spirit comes off as aloof and a little selfish.

A self-proclaimed loner, Honnold admits to getting into free solo climbing because he didn’t know anyone to climb with and didn’t want to talk to anyone. In the course of one year, he went from being a nobody to one of the most well-known free climbers in the world. And El Cap is the final (Or next) challenge he has yet to accomplish. If you like staying on the ground, maybe avoid this one. | (National Geographic)

There’s an attempt to delve into his childhood and his relationship with his father, but Honnold is an empty book when it comes to his reasoning behind such a dangerous and harrowing feat. They literally give him an MRI scan in the middle of the film in an attempt to solve this puzzle. But it simply concludes he requires more stimulus than most people. I’ll say.

Perhaps if the film focused more on his obsession with greatness rather than the danger of it, the scenes on the ground would have been more interesting.

However, some of the best documentaries are ones that go down an unexpected path. Free Solo gets increasingly interesting when interrogating the ethics of filming Honnold on his climbs.

“I’ve always been conflicted about shooting free soloing just because it’s so dangerous,” says Chin. “It’s hard to not imagine your friend falling through the frame to his death.”

The film features multiple cameramen within reach of him as well as drones to capture impossible angles. Honnold is apprehensive about all the attention he’s getting to the point where he quits.

Of course the entire film is leading to his eventual ascent up El Cap. It’s equal parts thrilling and terrifying. And yet Honnold works his way up the treacherous mountain with ease. He’s even grinning at a few points. The scene intertcuts between Honnold and the cameramen on the ground afraid to watch. It affects the tension somewhat, but it’s understandable considering they don’t want to get too close.

As a document to one of the most incredible athletic feats in history, Free Solo is mesmerizing. The photography, scale and queasy voyeurism make it captivating for thrill seekers and scary for anyone afraid of heights. The film drags a bit when psychologizing, but in the end, Free Solo is as thrilling as any blockbuster you’ll see.