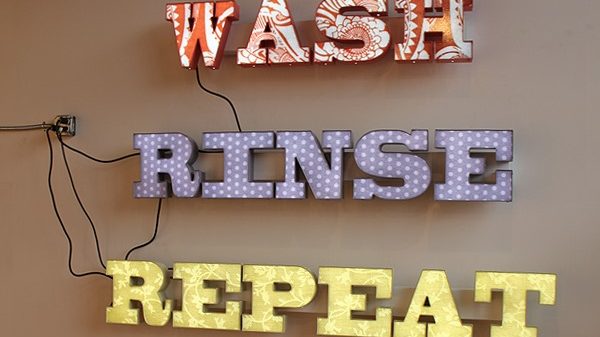 We have all read the directions on the shampoo bottle that say Wash, Rinse, Repeat. Some repetitions can be very enjoyable while others can be a real pain. Eating chocolate chip cookies fresh out of the oven while putting them on the cooling racks is one of my favorite things to do. My wife makes the best chocolate chip cookies I have ever eaten, so I always find an excuse to eat more of them along with drinking a cup of hot cocoa. I only eat the malformed or broken cookies that we wouldn’t take to the gathering for which they are being made. My decision making process is purely subjective so my wife often chides me for eating a cookie that to her looked fine, but I found an excuse to eat. As I have mentioned before I sing in a church choir. Some of the most beautiful hymns we sing are for the Easter Week services that take place Thursday, Friday and Saturday before Easter Sunday. We have been rehearsing that music in preparation for those services. We do this every year and this is a repetition I really look forward to with eager anticipation. Now one of my least favorite things to repeat is shoveling snow. If you are a regular reader of this column you have read about my growing up in snowy Rochester, New York and living in Eau Claire, Wisconsin for four years with more snow and cold weather. Actually shoveling snow is by far my least favorite repetition. I’m sure shoveling all that snow from when I was a kid and though adulthood helped me develop Degenerative Disc Disease requiring a fusion at L-5 S-1 with a rod and six screws to hold it in place. Me Shoveling My Driveway | Photo by Suzanne Chuey (My Wife)

We all experienced our recent big snow storm and once again, against all the rules of taking care of my sensitive back, I had to shovel at least a path for the wheels of our car to get out of the driveway and into our nearly impassable street. I certainly am not looking forward to another storm that requires shoveling snow. To me that is my worst repetitive activity has just been described. Did I just repeat myself again? Of course Winter is by no means over yet so I could have to do it again, God Forbid! The repeated activity this article is really about is what we just did this weekend. We had to “Spring Forward” to change our clocks to Daylight Saving Time. There has been and still is a lot of discussion as to whether we should continue the practice of changing back and forth from Standard Time to Daylight Saving Time. Most of the new appliances and gadgets that are being made can make the change automatically. But what about all of the older ones that have to be manually changed? For me I have a specific ritual for the actual change. First I set my watch to the clock on my iPhone. My watch tends to gain up to a minute, so I reset it to the phone and then use the watch to be the guide as I walk around the house making the change. We have an old car so that clock has to be changed manually also. Bothersome as the process may be many people don’t know the history of how and why the time change came into being. It all started with Benjamin Franklin when he was an American Delegate in Paris in 1784. He wrote an essay, An Economical Project, describing his idea of saving an hour of daylight in the evening by pushing the clocks one hour ahead in Spring and returning the hour to the morning in the Fall. The U.S. and Canadian railroad systems started using “Standard Time” on November 18, 1883, but it took many years for the practice to be generally accepted.  “Standard Time” was adopted so that train departure and arrival schedules would match up in all parts of the country. Before that each railroad company set their schedules on whatever time they wanted. The idea of “Daylight Saving Time” wasn’t taken to seriously until 1907 when a London builder named William Willett wrote a pamphlet, The Waste of Daylight, in which he proposed turning clocks forward by 20 minutes on the four Sundays in April and changing them back on each of the four Sundays in September.  In the pamphlet he did give a reason for changing the clocks: “Everyone appreciates the long, light evenings.  Everyone laments their shortage as Autumn approaches; and everyone has given utterance to regret that the clear, bright light of an early morning during Spring and Summer months is so seldom seen or used.”  While he was taking an early morning ride he noticed that people kept their blinds closed to keep out the morning sun.  Changing the clocks would make that sunshine last an hour longer in the evening and allow the mornings to be less bright. The British Parliament passed on May 17, 1916 to formally start the time change to Daylight Saving Time, known in Europe as “Summer Time,” on Sunday May 21,1916. The energy savings were really noticeable during WWII when they set the British clocks two hours (then called “Double Time”) ahead of Greenwich Mean Time during Summer.

The adoption of “Daylight Saving Time” in the United States began in 1918 and the first time it was put into effect was on March 31,1918; it lasted for 7 months so that industries wouldn’t need to use artificial lighting during the evening hours.  Many people didn’t like the idea so in 1919 after the war ended and with serious protests, Congress using an override repealed the bill.

Let me know what you would like me to talk about or explain. You can email me at: tim.chuey@eugenedailynews.com.