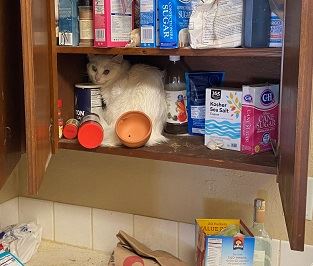 Eugene Animal Services was contacted by the property management on Sunday, July 10, and advised the tenant had been evicted and they counted 15 cats. They said there was no food or water left for the cats, but the property management provided food and water until Eugene Animal Services came for the cats the next day. Eugene Animal Services went to the house and impounded 26 cats. They had ringworm and were very frightened, but otherwise appeared healthy. The house’s interior was covered in feces/urine and there was only one cat box in the apartment. EPD Animal Services was unable to get the owner’s information because the apartment complex would not release it. The cats were taken to Greenhill and the cats are now waiting for adoption.