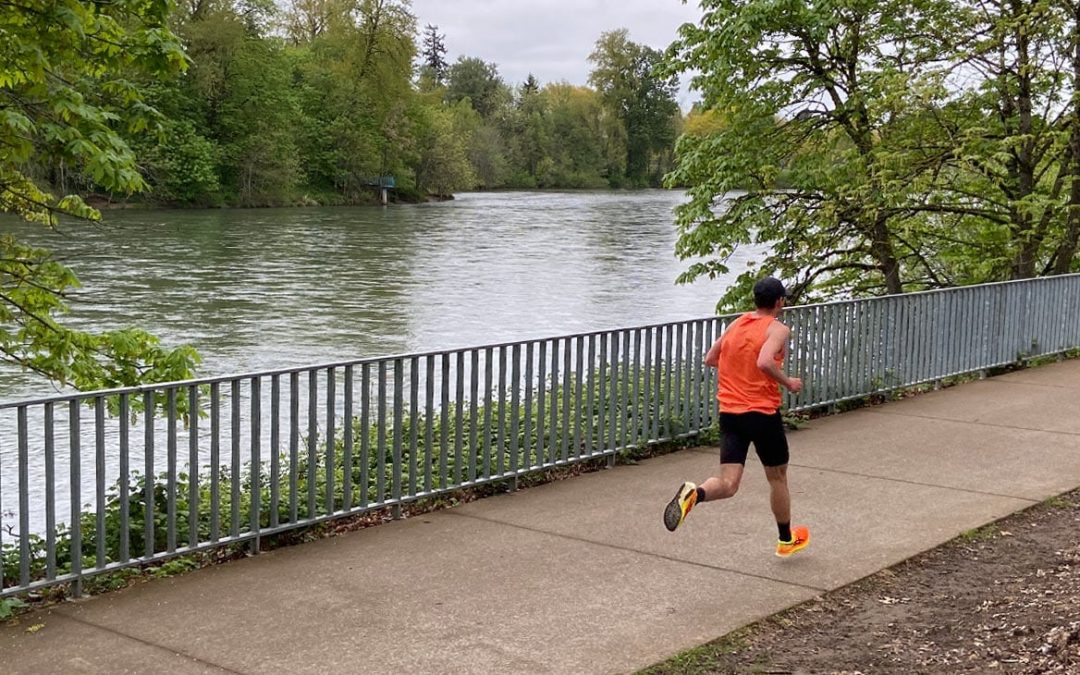 Hit the trails in the footsteps of legends around TrackTown USA.

As a former University of Oregon track and cross-country athlete, I ran more than 10,000 miles on the roads and trails of TrackTown USA, from a rolling hillside trail to paths through a sprawling filbert orchard. With great routes everywhere, it’s no wonder Eugene is considered the place the U.S. jogging movement was born. So where should you start? Here are my picks for seven of Eugene’s most memorable running routes.

1. Run the Route of a Legend in the East Hills

To make this pilgrimage yourself, start from Washburne Park (just a few blocks from Hayward Field) and take the scenic route up Fairmount Boulevard to Hendricks Park. From there you can cut through the Rhododendron Garden to get to the memorial on Skyline Boulevard, then retrace your steps to complete a 2-mile out-and-back.

Pro tip: Keep an eye out for Prefontaine’s former roommate and teammate Pat Tyson, who can occasionally be spotted leading a guided run through Hendricks Park to Pre’s Rock.

2. Climb to the Best View in Eugene

The most challenging route on this list starts from the Martin Street trailhead of the 17-mile Ridgeline Trail system just minutes from downtown Eugene, where your legs and lungs will be tested with more than 400 feet of elevation gain in the first mile. From there you’ll have the option of heading east on a section of trail with gentler, more rolling hills — or turning southwest and climbing another 1,000 feet to the summit of Spencer Butte, for a total of 3.2 miles of uphill running.

Pro tip: Don’t try to run all the way up Spencer Butte. The footing gets dicey near the top, and you’ll want to slow down to enjoy the view.

3. Escape the Heat in a Springfield Orchard

This historic filbert orchard in Springfield is undergoing major changes to help protect its trees from blight, but even as Dorris Ranch’s lush canopy evolves, it’s still a great place to take refuge from the sun on sweltering summer days. One full loop around Dorris Ranch is about 2 miles, but I prefer to spend my runs criss-crossing the orchard and letting the route choose itself as I go.

Pro tip: From Dorris Ranch, you can also connect to the Middle Fork Path, a 4-mile paved trail with sweeping views of the river.

4. Go Sightseeing Along the Willamette River

Whether you want to run 2 miles or 20 miles (or something in between), this trail network along the Willamette River has a loop just for you. For soft-surface running, cross over the river from campus into North Eugene and connect to Pre’s Trail, a 4-mile, wood-chip path with views of Autzen Stadium, Cuthbert Amphitheater, Alton Baker Canoe Canal and Whilamut Natural Area.

Prefer a paved surface? Ruth Bascom Riverbank Path, aka the Willamette River Trail, offers up to 14 miles of waterfront running with mileage markers every quarter-mile, making it perfect for tempo runs and other timed efforts.

Pro tip: Mark your calendar for the Eugene Marathon, usually held in April or May, which runs along the Willamette River Trail for nearly half the race.

5. Explore the History of the University of Oregon

Starting from Hayward Field in the heart of Eugene, you can run through most of the University of Oregon campus in about 2 miles — but once you reach Pioneer Cemetery, you’ll be tempted to keep going. The towering firs, cedars and oaks and heritage rose bushes here are often more than a century old. The tombstones date back even further, to 1872, when the cemetery was established. The crushed-gravel trail around the cemetery is nearly 1,000 meters long, and the trees offer generous shade cover for nearly half the loop.

Pro tip: To add even more history to your run, bookmark the Strides for Social Justice app and follow one of these guided tours, including one honoring exceptional Black athletes who helped build the legacy of University of Oregon athletics.

6. Run Fast on a Wood-Chip Racetrack and Beyond

The Adidas Oregon Trail at Amazon Park is a popular place for runners to test their fitness on the 1,000-meter and 1-mile marked loops. You can just loop the loop or take a longer run, connecting to the paved path at the south end of the park. Follow it to the Rexius Trail, a flat 3.5-mile loop with access to the Ridgeline Trail in Eugene’s south hills.

Pro tip: If you have an appetite for post-run brunch, Off the Waffle, Brails and my personal favorite, known to locals as The Glenwood, are all less than a mile away on Willamette Street.

7. Run, Then Beers in the Whit

This 6.9-mile paved path through the West Eugene Wetlands is a pleasant excursion before some R&R in Eugene’s Whiteaker neighborhood. For easiest access to the Whit, start and finish your run at Westmoreland Park (you’ll need to take the footbridge over 18th Avenue to connect to the Fern Ridge Path). From the footbridge, it’s a straight shot down Polk Street to the Whit’s brewery district, where outdoor patios and refreshing pints await.

Ben DeJarnette is a Portland-based writer, runner, and double Duck who competed for the University of Oregon’s cross country and track & field teams from 2009 to 2014. As a freelance journalist, he has contributed to High Country News, Men’s Journal, Oregon Quarterly, InvestigateWest and others.