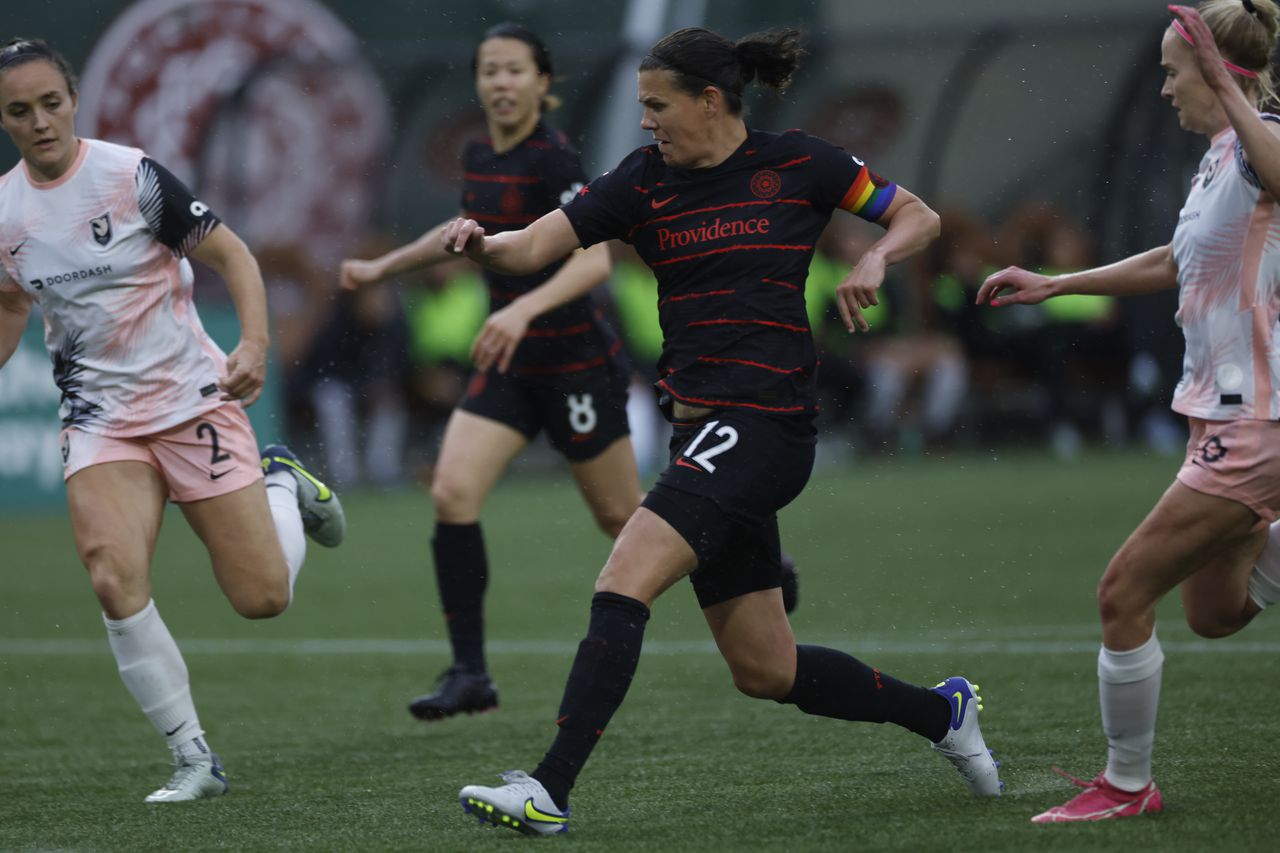 It was a night of firsts and not-even-close-to-firsts for the Portland Thorns on Friday night at Providence Park. Defender Kelli Hubly scored her first career goal, and legend of the game Christine Sinclair secured a brace with two goals added on top of her mountain of career scores. Portland beat Angel City FC, 3-0, in a game the road side competed hard in but couldn’t find a goal.

“Really excited to see the team showing what they can do,” Thorns coach Rhian Wilkinson said. “Big three points and a big win. There were some moments in the game when we lost a bit of momentum and you saw the real quality of Angel City. But overall, very happy with the performance.”

The Thorns (2-1-3, 9 points) came out aggressive, finding quality chances from the early moments of the match. The first most dangerous one came in the sixth minute as Sophia Smith found Christine Sinclair in close, but it went off the post.

In the 10th, Sinclair’s take on an open goal was blocked by the Angel City (3-3-0, 9 points) defender. The onslaught continued into the 15th minute, when Portland finally broke through.

A corner kick in from Smith found the head of Hubly, who made her first appearance ever in the box score in NWSL to make it 1-0 Thorns. She hadn’t previously recorded a goal or assist.

“It was crazier than I could dream,” Hubly said of her goal. “We always joke that I’m gonna score, but to actually score was so surreal. I, like, blacked out for a second.”

Three minutes later, after a turnover, Hina Sugita played a soft pass ahead to Sinclair for the goal to make it 2-0 Portland.

The remainder of the first half was filled with chances for the Thorns, including an ambitious take from outside the box in the 21st minute by Smith. On a run into the box in the 22nd minute, Smith was assessed a yellow card after her aggressive attempt to get on the ball and shoot. She and the Providence Park faithful disagreed vehemently as Smith’s contact with her defender didn’t initially appear reckless.

Christen Press had Angel City’s best chance of the half in the 28th minute on a header that went slightly too high. As the half wound down, Portland’s attack cooled off and Angel City was able to find some attempts of its own.

Angel City dominated possession for the first 10 minutes of the second half until Smith played an outstanding ball ahead to herself and ripped one that forced a save.

In the 65th minute, Angel City’s best chance of the night came on a header from Cari Roccaro that bounced off the crossbar. Portland added to its lead soon after in the 68th minute.

Sinclair secured a brace with her second goal of the night on a header, fed in perfectly by Canadian national teammate Janine Beckie.

“Janine, I think the people in Portland will soon find out that she’s a world-class talent,” Sinclair said. “She can play pretty much any position and we’re obviously super thrilled to have her. … She hasn’t had the best experience all the time in her club career, and being part of this organization and being part of this team, she’s going to flourish.”

The goal put Sinclair into a tie for second all-time in NWSL for career goals with Lynn WIlliams (57), who is out for the 2022 season due to injury.

“I’m proud of it,” Sinclair said. “It goes to show the career I’ve had, and I’ve been very fortunate to be part of this organization since day one. Just very fortunate to have been on a very successful team for 10 years. Credit to the team and teammates I’ve played with.”

Morgan Weaver came on to replace Sinclair in the 77th minute, and the Thorns legend received a loud ovation from the Providence Park crowd. Neither team found the net the rest of the way as a slew of subs came on for both sides.

Portland’s next match is on the road at San Diego Wave FC on Wednesday. Kickoff is scheduled for 7 p.m. (TV on CBS Sports Network). 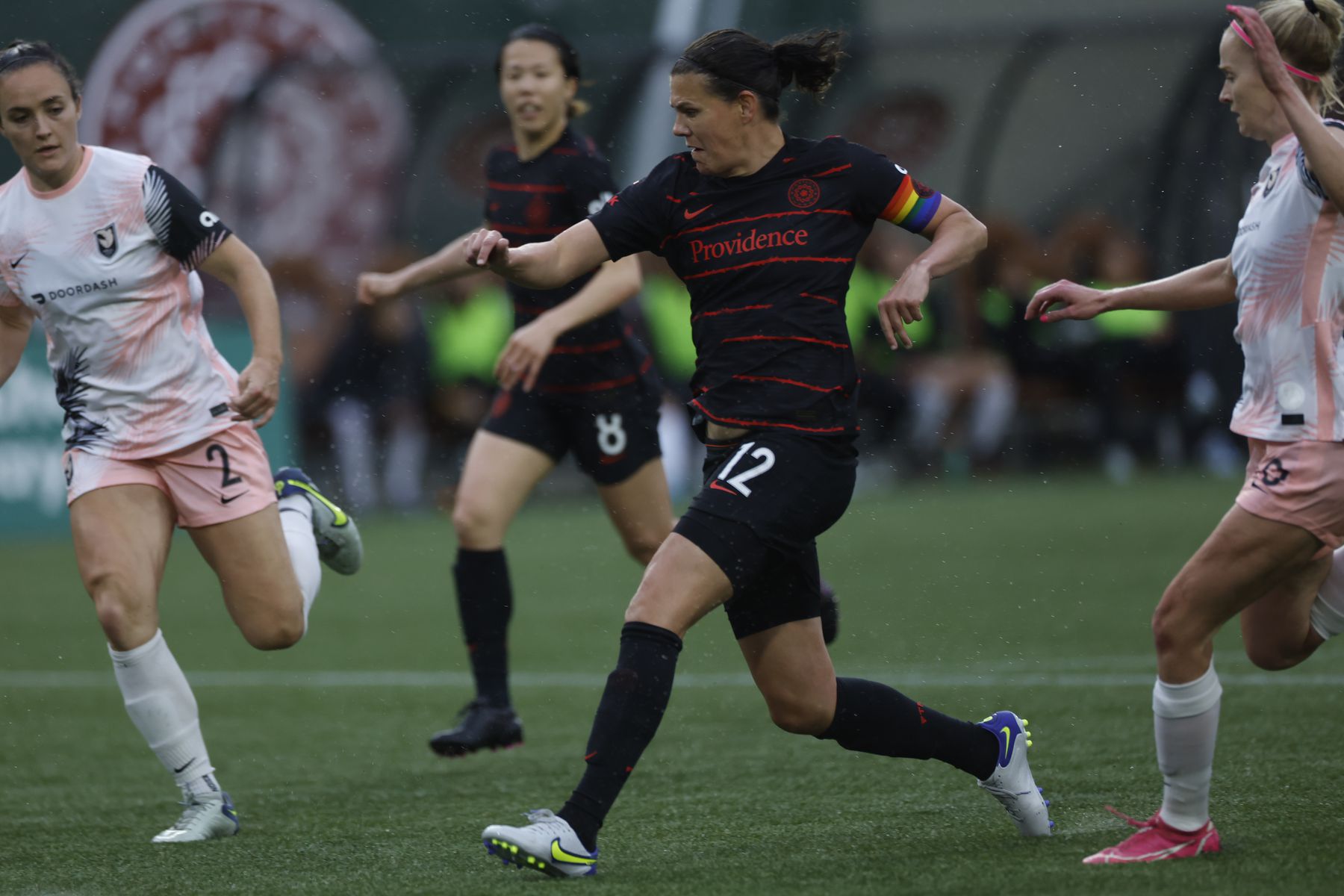