MORROW COUNTY — Nestled in the hills of Morrow County, hundreds of solar panels and wind turbines are generating a product that will soon be in high demand around the state — clean electric energy.

But storing large amounts of renewable energy has proven challenging. Wind and solar only generate power when the sun is shining or the wind is blowing. Otherwise, fossil fuels kick back in. Now, one major utility in Oregon is trying to produce energy 24/7 with a boost from a critical component — batteries.

Portland General Electric partnered with NextEra Energy Resources to build a first-of-its-kind facility that will use an innovative battery technology that supporters are calling a “game changer” for Oregon’s renewable energy transition. The batteries allow the Lexington facility to capture and store electricity even when there’s no sun or wind available.

“I think you’re going to see more of these types of facilities in the future,” said Kristen Sheeran, Portland General Electric’s director of sustainability strategy, on a recent tour. “We’re still in the early years of battery storage technology development.”

The Wheatridge Renewable Energy Facility is about 30 miles from the utility’s now-shuttered Boardman coal plant and uses some of the same transmission lines. It started operating in March and generates up to 350 megawatts of clean energy — enough to power about 100,000 homes. The batteries store 30 megawatts, or enough to power the city of Tigard for four hours.

PGE’s push for clean energy is driven in large part by House Bill 2021. It’s one of the nation’s most ambitious climate plans and was signed into law in 2021 by Gov. Kate Brown. The law requires utilities like PGE and Pacific Power to reduce carbon emissions by 100% by 2040.

Sheeran said battery storage will help them get there by improving reliability and creating storage that allows the facility to function 24/7.

“Sites like this are fitting into sort of a larger grid network of providing reliable, renewable power that utilities across the West are increasingly drawing on,” Sheeran said.

David Lawlor is NextEra’s director of development for the Pacific Northwest. NextEra one of the world’s largest generators of wind and solar energy and a leader in integrated battery storage systems.

He said as battery technology advances, the facility will be able to handle more storage. Right now, there are 21 large and small battery containers at the facility.

“One of the great things about having battery storage integrated into the other two technologies, is it’s already engineered and built for augmentation,” Lawlor said. “So these containers can take more batteries and as the batteries become a little less efficient, we add more batteries to keep the capacity.”

Jana Lehn, NextEra’s PV Solar Field Technician, is one of the first technicians cross-trained in all three renewable technologies. She said her role at Wheatridge is to make sure the facility and batteries are working properly and train other technicians.

So far, only solar panels generate enough energy to charge the batteries. Lehn said the energy collected by solar panels produces direct current or DC voltage similar to car or cell phone batteries. The DC voltage then goes to an inverter, or the central point of where all the power goes and changes into alternating current or AC voltage.

“It does its little magic, it turns it to AC voltage, which that’s what our transmission lines carry,” she said. “Your AC voltage is going to be the plug on your wall at your home.”

This process helps the energy collected become “clean energy” and it, in turn, creates an easier flow to power homes.

Bob Jenks, executive director of the Oregon Citizens Utility Board, said the Wheatridge facility represents a step in the right direction for Oregon’s clean electricity efforts. It also removes the dependence on only one source of clean energy.

“You need diversity of renewable resources,” he said. “You need flexibility with them and the battery here is providing that flexibility.”

Jenks said battery storage is becoming increasingly important in the clean energy transition, as utilities figure out ways to move power from one time of the day to another. Adding batteries to the mix will change when, where, and how clean energy is created and stored across the state.

“That comes in real valuable because solar stops producing in late afternoon, early evening — but that’s when people get home from work and tend to turn on their air conditioning,” Jenks said.

Jenks cautioned there could be some downsides to the technology, and questioned the ability of batteries to manage the power load and travel long distances. For example, he said PGE’s decision to locate the batteries at the facility could mean that by the time the energy makes it to the Willamette Valley, some of its power has been lost.

He also said storage capacity can decline over time as the battery’s life capacity depletes. Weather is another variable that can affect how batteries store energy.

“Anyone who owns an electric vehicle knows that in the winter you don’t get the same amount of miles as you get in in the summer,” he said. “Cold weather has negative effects on the ability to charge and maintain power.”

But overall, Jenks said the facility is a smart investment and will likely be good for ratepayers.

“This is a good example of how the technologies are there,” he said “And in Oregon, there’s the political will to require our utilities to use that technology.”

‘Tip of the iceberg’

Adam Schultz, the Oregon Department of Energy’s electricity and markets policy group lead, said he expects more projects to follow Wheatridge’s lead by combining different technologies like wind, solar, hydropower and batteries to generate and store more clean energy. But that is also going to prompt a change in the current power system grid.

Schultz said Oregon’s electric system was built for transporting power when needed rather than collecting it. He said it doesn’t take a lot of storage to begin to have an impact on the power grid, and facilities like Wheatridge will help other utilities think differently about storage and get clean energy on the power grid.

Storage also can save ratepayers money during peak hours, Schultz said. Especially in the summer months when air conditioning units are running blast.

“So that’s sort of the game-changer of storage at a very broad scale,” he said. “Sort of the tip of the iceberg there of what’s coming.”

As battery storage becomes more common, Schultz said it’s hard to overstate the role it will place in the next 40 years and he expects states like Oregon will take a more streamlined approach to clean energy and share resources with other states. 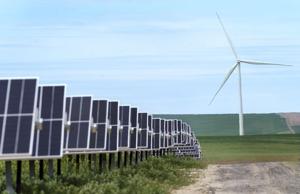