PENDLETON — Miranda Case sat with her parents on the benches of the First Christian Church, Pendleton, and recalled her open heart surgery.

Case, who is going to be a sophomore in high school, was born with left hypoplastic heart syndrome, a rare congenital left heart defect. The syndrome causes the right side of the heart to pump blood to the lungs, making it difficulty for oxygen-rich blood to go through the rest of the body.

Since her birth, Miranda as been through four surgeries. But she doesn’t allow her condition to get in the way of living a normal life.

“I have my regular seven-hour school day I go to during the week,” Case said. “And I go to dance. It’s traditional dance — hip-hop, jazz, contemporary. Practices are normally an hour-and-a-half, which is four to five days a week.”

She has lived with a tight community who’s been supporting her since she was baby.

Along with contemplating her future, she deals with the thought of having to tend to her heart’s medical needs for the rest of her life.

“It’s very nerve racking about getting a transplant because she’ll be on anti-rejection meds the rest of her life,” said her mother, Lori Case.

“It’s always a concern when they place a different heart in her body that her body could reject,” he said.

Miranda Case is under Status 1B on the transplant list. Those individuals generally not required to stay in the hospital as in-patients and have the second-highest priority on the heart transplant list.

Although she is no stranger to heart procedures, her parents carry the brunt of emotional weight going from one surgery to the next.

“The first surgery was the hardest until we had to have an open heart surgery that was not planned,” Lori Case said. “We knew that she was going to have to need three but when she had the fourth one, that was very nerve racking.”

In the meantime, the Case family has found ways to spread the word of the surgery and help fund Miranda’s medical finances.

“Funding is through COTA, Children’s Organ Transplant Association. Anyone who is under 18 can qualify to use them as a fund raising agent,” Lori Case said. “They do not charge us anything and a hundred percent will go in honor of Miranda’s name.

The Cases have had a variety of ways to help spread awareness about Miranda’s situation, including selling selling snacks and candy bouquets Friday at the Pendleton Farmers Market. 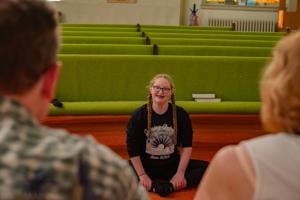