‘Play for Hannah’: Cascade scratches out 3-2 win over Marist Catholic in Class 4A softball title game 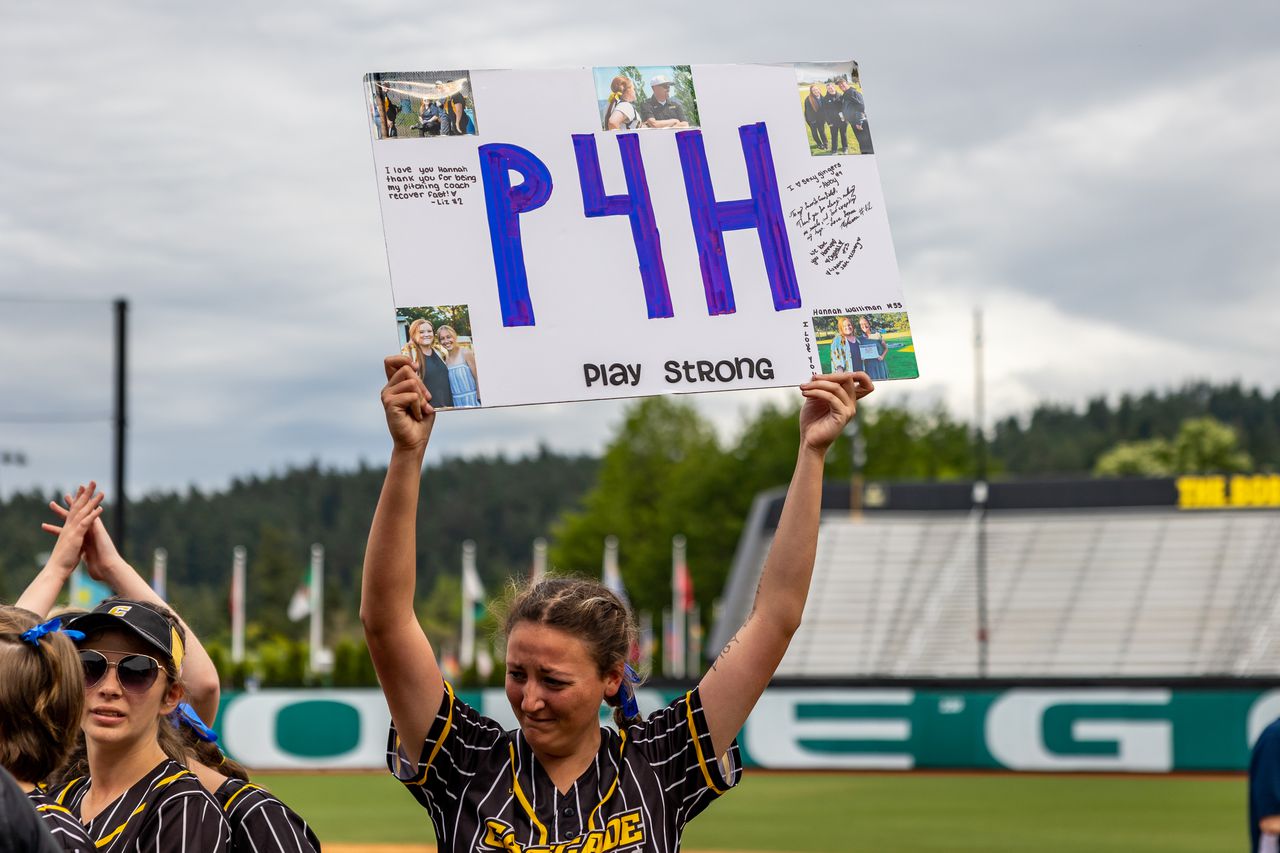 EUGENE — They played for Hannah. And they won.

Hannah Ganfield, an assistant coach for the Cascade High School softball last year, was recently diagnosed with Guillain-Barre syndrome. She’s currently stuck in the ICU, unable to breathe on her own. Left fielder Kailee Bode said she’s only able to move her right foot, her right hand and open her right eye.

With Ganfield on their mind, the Cougars grinded out a tight 3-2 win over Marist Catholic on Tuesday to win the Class 4A championship game at Jane Sanders Stadium. They were tied or trailing for most of the game, but they battled late against a pitcher who threw three no-hitters this season.

Marist Catholic pitcher Malia Williams began her afternoon by striking out the side before leading off the bottom of the first with a single. Myla Mahoney followed with another hit, but center fielder Emma Hilfiker made a strong throw to cut down Williams at third and avoid any damage.

Williams worked around the zone in the second inning, issuing a leadoff walk and falling behind in the count multiple times. The Spartans could still hardly touch her. She recorded two more strikeouts, stranding the runner at second.

Meanwhile, Cascade pitcher Hannah Walliman settled in. She retired eight in a row to keep the game scoreless through three innings.

Williams continued to induce weak swings, striking out two more in the third inning and punching out the side in the fourth inning.

“We expected a rise ball from her,” right fielder Caylen Metcalf said. “Obviously, we struggled with that.”

Walliman cracked in the bottom of the fourth. She immediately found herself in a sticky situation after issuing a walk and giving up a single to lead off the frame. She induced a pair of fly outs, but an RBI single by Kellie Schroffner gave Marist Catholic a 1-0 lead.

Williams’ control issues returned in the fifth as she walked the first batter. On a 3-1 count, Malia Scanlan smacked a single for Cascade’s first hit of the game. Tessa Woodrum then hit a bunt single, reaching on a miscommunication by the Marist Catholic fielders to load the bases with no outs.

Williams nearly escaped the jam, getting a strikeout and a pop out. Hilfiker had other ideas, hitting an RBI single to tie the game.

“It was a little nerve-racking in the beginning, striking out,” Hilfiker said. “I was like, ‘Okay guys, come on. Just find a hit… I think once the game settled in and we realized that it wasn’t gonna be a blowout, then we’re in this thing and it was close.”

Scanlan was thrown out in a rundown trying to score the go-ahead run, which ended the inning. The Spartans almost blew what should have been an easy out, but they were able to nab Scanlan as she tried to dive back into third.

After the Spartans almost blew a rundown, the Cougars went a step further and completely botched one. Williams scored all the way from first base on a single. The throw to the plate beat her, but the catcher threw it in the wrong direction, allowing Williams to trot home. Marist Catholic retook the lead in the fifth, 2-1.

Cascade immediately roared back, with its passionate fan base engaging in organized chants from the stands. Bode singled, stole two bases and scored on a sacrifice fly to make it 2-2. It was the fourth straight half-inning with a single run, a far cry from the quiet beginning to the game.

The Cougars kept the energy going in their favor. With two on and two outs, Bode scratched out an RBI infield single to give Cascade its first lead of the day.

Walliman held onto the lead, retiring the final three batters. The players mobbed each other on the first base line, celebrating their gritty defeat of Marist Catholic in the 4A championship. Walliman held up a “P4H” sign, standing for “Play for Hannah.” 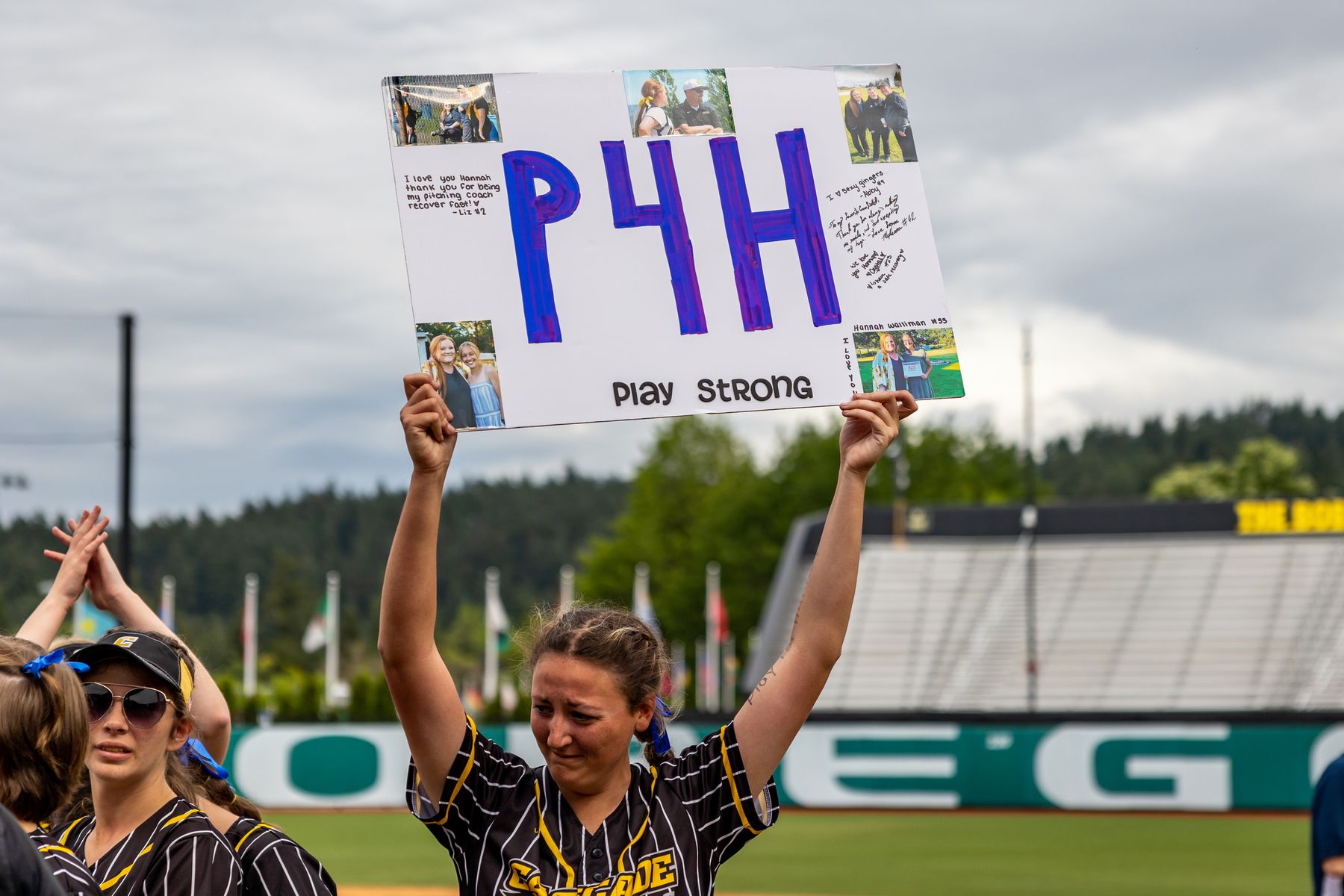