Reckless driver taken into custody after pursuit and forcible stop 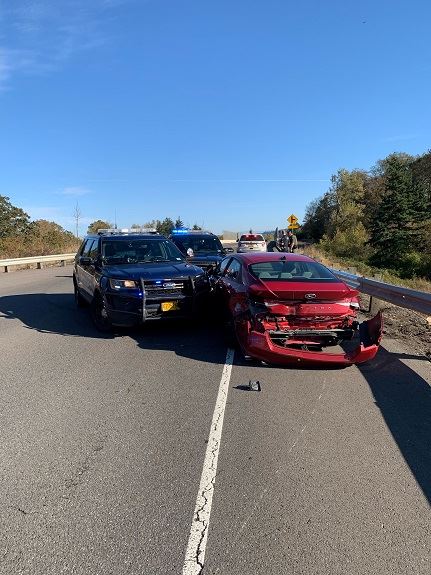 Shortly after 1 p.m. today, October 27, a man was reported at 1126 Hwy. 99N stumbling around the lot, trying to go into businesses, and taking flowers out of his vehicle and throwing them around. At approximately 1:30 p.m. there was a subsequent call reporting the man in a vehicle at Gilbert Shopping Center, 1170 Hwy. 99 N, who was getting in and out of a sedan, stabbing at it with an item, driving recklessly, and throwing trash out of his vehicle. He was reported to have almost crashed into a building before leaving from the area. Eugene Police officers were dispatched in emergency mode to locate the driver. There were calls reporting the vehicle nearly struck other vehicles and a bicyclist, was driving at high speed and driving in the wrong lane. Schools in the area were notified of the safety risk and additional officers were called out due to the escalating threat.

A pursuit was authorized and during this, the driver was reported to have run into multiple police vehicles. One officer sustained minor injuries. A train in the area was stopped. Police were able to forcefully stop the vehicle near KR Nielson Road. The driver fled and multiple officers pursued him on foot through thick blackberries. The suspect was taken into custody at 2:28 p.m.