One person was killed and two others seriously injured Thursday evening when their vehicle, being pursued by law enforcement officers, rolled several times just north of the city of Jefferson, Oregon State Police reported.

EUGENE, Ore. — The Eugene Police Department is investigating an attempted armed robbery near the University of Oregon.

Three females told police they were approached by a man hold a gun around 12:30 a.m. Sunday near East 17th Avenue and Patterson Street.

Police say the three were walking on East 17th Avenue when the suspect approached them, telling them to stop, showing a gun and demanding money. They told the suspect they didn’t have any. He then ran away.

The suspect is described as a white male, about 5’10” tall, with short dark hair. He was wearing a dark hoodie and a black mask with white squares around the mouth.

Anyone with information about this case should call police.

LEBANON, Ore. — A search underway in Lebanon for a man accused of robbing a deli at gunpoint.

Detectives say it happened around 10:30 Sunday morning at Peppers Deli, on the 2700 block of S Santiam Highway. The suspect displayed a handgun and demanded money, before leaving with an undisclosed amount of cash.

EUGENE, Ore. — A robbery suspect is under arrest after police say he held up a downtown Eugene business and then fled.

Eugene police received a 911 call at 8:30 a.m. Monday, reporting an armed robbery at B & B Distributors.

Police say 49-year-old Paul Shields used a gun to get cash from an employee.

EPD says the suspect fled toward Monroe Street and was arrested near Fifth and Monroe. He was taken into custody for robbery in the second degree and possession of meth.

ROSEBURG, Ore. — Douglas County sheriff’s deputies are looking for a woman who allegedly robbed an elderly woman at gunpoint on Sunday.

It happened at the Woodland Hills Senior Estates on NE Stephens Street.

An 89-year-old woman told the sheriff’s office that on a woman came to her door on Saturday looking for a man named Walter, and then she asked to use the bathroom. She returned the next day and told the victim she left her contact lenses in the bathroom. The victim told the woman she couldn’t come in, but the woman forced her way into the house, armed with a small black handgun.

The victim said the woman took her into the bedroom and made her lie down on the floor while the she looked through drawers. She says the suspect stole $300 in new two dollar bills and some prescription medication, pulled the phone cord out of the wall, and then she left.

The suspect is described as a 5′ to 5’06” tall, 35-40 years old, wearing dark clothing, dark scarf around head, carrying blue/black/white stripped bag. She was driving a white van, possibly a mini-van.

Anyone with information about this case is asked to call the sheriff’s office at 541-440-4471.

CORVALLIS, Ore. — Police caught the man suspected of robbing a pizza shop in Corvallis on Tuesday.

Kenneth Starr, 35, of Corvallis, is accused of pointing a gun at an employee and demanding cash at the Papa Murphy’s on NW Circle Blvd. No one was hurt.

Police say Starr had a vehicle matching the one used in the robbery. He also matched the description from surveillance photos.

Starr’s also been arrested for domestic assault, accused of strangling his girlfriend the night of the robbery, injuring her jaw and causing bruises. Starr’s bail is set for $150,000. He’s scheduled to be in court on Monday.

CORVALLIS, Ore. — Police are looking for the suspect who robbed a Papa Murphy’s Tuesday afternoon.

At about 2 p.m., police say a man walked into the take-and-bake pizza business at 960 NW Circle Blvd. and demanded money. He had a handgun and pointed at an employee. After stealing the money, he fled toward NW Spruce Avenue.

Police say the suspect is in his twenties, with dark colored hair and a dark colored beard. He is about 5’6″ to 5’9″ tall and weighs around 225 lbs. The suspect wore dark colored pants, dark jacket and a baseball cap.

Anyone who sees the suspect or has information about this incident should call the Corvallis Police Department at 541-754-1733.

EUGENE, Ore. — Police responded to a robbery at Off The Waffle just before 8:00 p.m. Friday night. Police said a man walked up to the counter with a note and demanded money. He also said he had a gun.

A worker handed the man money out of the cash register. He then took off on foot and headed southbound on Willamette Street.

Police said they’re still looking for the suspect, but are confident he’ll get caught. “This is a high risk type of a crime for somebody with pretty low yield. So eventually people usually do get caught,” said Melinda McLaughlin, Eugene Police Department spokesperson.

The man is described as a white man in his thirties who’s around 180 pounds with brown facial hair. He was last seen wearing a long sleeve black shirt and sweatpants. He was also wearing a Portland Trailblazers hat.

Anyone who knows the suspect or saw anything Friday night is asked to call the Eugene Police Department. 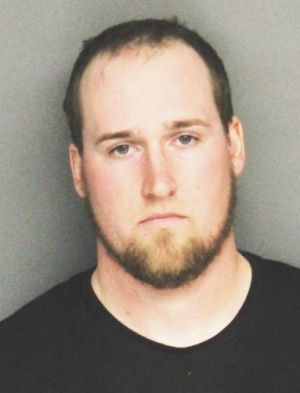 Sean Michael Gilbertson was booked into jail Wednesday morning after Corvallis Police Detective Dan Duncan spotted Gilbertson in a white Ford pickup that appeared to match the vehicle in surveillance footage from the robbery.

Police booked Gilbertson on felony charges of first-degree robbery, coercion and unlawful use of a weapon, as well as misdemeanor charges of second-degree theft and menacing.

He is being held on $203,500 bail pending his arraignment Thursday in Benton County Circuit Court.

Police credit the arrest to Detective Duncan’s sharp eye for detail. Duncan spotted the pickup in the Corvallis Feed and Seed parking lot off of Highway 34, five miles east of Corvallis, at 8:15 a.m. Wednesday. The pickup had distinguishing characteristics that matched that of the suspect vehicle, explained Lt. Cord Wood of the Corvallis Police Department.

“It had some missing pieces, the body style was the same, the wheels, some of the accessories on the truck,” Wood said.

After observing Gilbertson get in and out of the pickup, police interviewed Gilbertson and searched the vehicle. Officers seized a BB gun and clothing believed to be linked to the robbery.

On Monday, police released details and a surveillance photo from the robbery, asking the public for help in identifying the robber. The man, who wore a ski mask, pulled into the gas station in a white pickup at 7 a.m. He pointed a gun at the gas station attendant, according to police, and forced the attendant to open the cash drawer and hand over the money – about $100 – before getting back into his pickup and driving off. 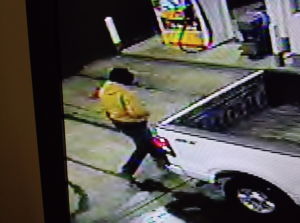 Corvallis police are seeking the public’s help in arresting a man suspecting of robbing the Shell station at 1680 S.W. Third St. the morning of Jan. 7.

Shortly after 7 a.m., Corvallis police were sent to the report of an armed robbery at the gas station and market. An attendant there told police that a man in a white Ford pickup had pulled into the station, wearing a ski mask. The masked man pointed a handgun at the attendant, demanded money and forced the employee to open the cash drawer.

Once the gunman had an undisclosed amount of cash, he got back into the pickup and drove south on Southwest Third Street.

The robber is described as a white male, about 6 feet tall, wearing a ski mask, hooded sweatshirt and a tan Carhartt-style jacket. The vehicle is a 2004 to 2008 Ford F150 extended cab pickup. The truck is white.

Anyone with any information regarding this robbery is asked to contact Detective Christy Molina at 541-766-6782.

A surveillance photo of the suspect can be viewed with the online version of this story at gazettetimes.com. The quality of the photo wasn’t suitable for print publication.