The Ducks found themselves this weekend in a tough series against Pac-12 leading Cal. Momentum from Wednesday’s win over Portland was supposed to be a catalyst for the once ranked Ducks. Friday night’s beating appeared to the job instead. The...

Well that escalated quickly. After giving up 10 quick points and an end zone interception to start the game, the Oregon Ducks exploded for 31 straight points before halftime, while stuffing Cal’s potent offense en route to a 44-28 win....

Good morning, Duck fans! We thought we would take this opportunity to let you behind the curtain of FishDuck.com. Many of you have asked, “How does FishDuck.com do it? You guys are always so right on! It’s uncanny.” We arrive...

Wow, last week was a hell of game. One of the most exciting and insane games I’ve seen in a long, long time. So, for anyone that wasn’t sure how much of a difference a quarterback can make, see last...

Well, there we have it. Another Ducks win by double digits, Oregon beats Cal for the sixth straight time, and the collegiate history at Levi’s Stadium gets kicked off with a Ducks win. As...

If you had the chance to watch the Oregon Ducks on Friday night then you probably had a few moment of where you wanted to throw your shoe through the television. I knew that Cal Quarterback Jared Goff had a strong arm, but in some cases it appeared Oregon had an interception for it to be a completion to a Golden Bears Receiver.

Similarly on Friday night the very slim veil of perception that the Oregon Ducks were a solid finishing team this season was broken. Yes, Oregon won and everyone should be happy for that. Running Back Royce Freeman has the ground game firing on all cylinders after adding another two touchdowns to his accomplishments for 2014. He now has fifteen on the year, and Marcus Mariota.

Last night he threw another three-hundred yard game to go along with five touchdowns and he took over first place in Oregon History for passing. All great accomplishments, BUT….they did not finish the way a ‘Championship Contender’ should. If you look at last weekend and Alabama, who visited a ranked Texas A&M team THAT is what Oregon should be doing.

The Crimson Tide shutout their opponent 59-0 on the road and will likely do the same tonight to a lowly Tennessee team, also on the road. Oregon passes the eye test with flying colors, especially with the uniforms, and the speed. Forty one points are the most Oregon has given up this season, but to Cal.

Earlier in the season Oregon hosted Michigan State. A highly ranked Michigan State, and won the game. If the Spartans had put up forty in a loss I could understand, but when you playing a team that is now at the .500 mark with a loss and not ranked, the reality is right now that there are better teams to be put in the Top Four come Tuesday night than the Oregon Ducks. 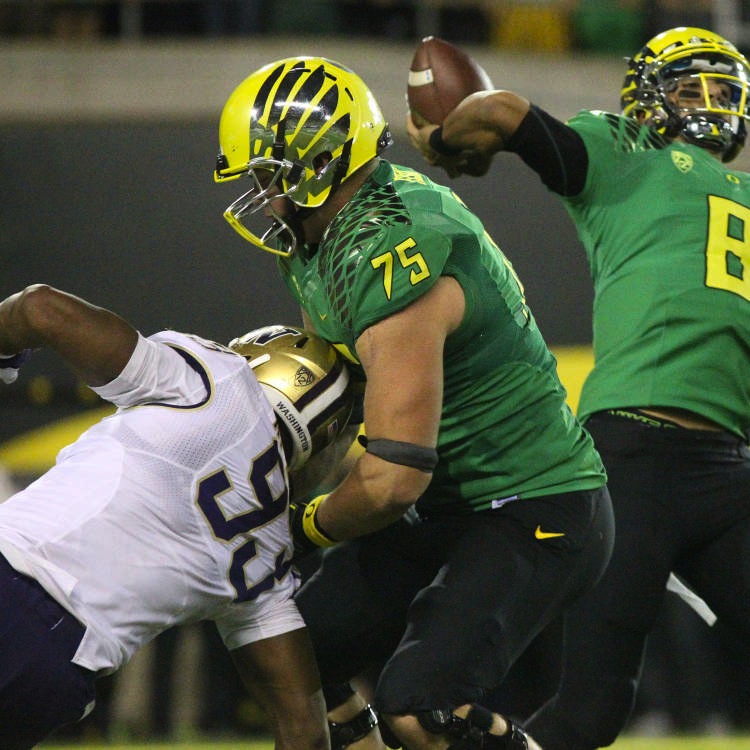 Unfortunately part of the problem is the Pac-12 Conference. Everyone each week is beating everyone else up. This weekend is no exception. One of the Oregon Ducks biggest rivals the last two seasons is Stanford, who visits Autzen next weekend. The game will still be important, but a win will likely only have a small impact.

The Cardinal are reeling this season with an Offense still trying to find itself and a Defense trying to maintain their identity. The team has three losses on the season, two in the Pac-12 Conference and even more important they are not even ranked. Oregon could put up forty on Stanford in the first half next week, but if the Oregon Defense plays like they did against Cal and Arizona fans could be leaving early hanging their heads on another loss this season.

Oregon could face one more ranked team this season before the Pac-12 Championship Game in Utah, who they visit on November 9th. Utah is feisty and will play USC on Saturday. Oregon needs to dominate from this point on to have a legitimate chance at a National Title this season, or we could have another week of top team losses for Oregon to move up.

I would love to see Florida State lose a game and Jameis Winston be put in his place, but that is another article for a different time, maybe next week. For now we know that Oregon can win games, but they need to finish them.

Oregon and Stanford kick off on Saturday, November 1st at 4:30pm Pacific Time on FOX.

That game back in late September — the one against Washington State — is one the Ducks remember. That was the first time this season when Oregon was exposed, offensively and defensively speaking. I...

Put it in the books Coach, we’ve got a record-breaker in the building! Marcus Mariota never ceases to amaze me as the season continues. After this past weekend’s game against the Washington Huskies, Mariota...

FishDuck.com writer Omar Garibay-Diaz spoke with Oregon’s starting center Hroniss Grasu Tuesday outside the Hatfield-Dowlin Complex. The time has almost come. Friday the Oregon Ducks will march down to Santa Clara to face the Cal...

It’s only two weeks into the season and we’ve already seen some great games in the Pac-12. A few teams have already shown that they learned from last year’s mistakes and are much improved while other teams are showing that we might have given them a little too much credit. Let’s take a look at two teams whose stock is …