Is it not an amazing time to be a Ducks fan or what?! Especially for those long-term fans like my father who sent me a picture from back home of our golden doodle giving him a high-five after the game...

It is coming down to the wire with one week to go. On Tuesday the new College Football Playoff Top Twenty Five was released with Alabama at number one, Oregon standing pat at number two and TCU jumping Florida State at number three. The Seminoles fell to fourth.

The Oregon Ducks find themselves in a great position for the first year of the College Football Playoff. With the human factor doing the heavy lifting this season Mark Helfrich and the team need just to focus on one thing. Winning their games. So far they have had one stumble against the team they will have another chance at beating this week in Arizona. However let’s take a quick look at this week’s Top Four teams where there was a bit of a surprise.

The Florida State Seminoles are undefeated this season. Quarterback Jameis Winston has had a good year, but not as good as last season. The team has won their games, but not made much of a statement in their wins this season. Winston and his teammates have had several narrow escapes this season including playing from behind a few weeks ago at Louisville and barely escaping Miami last week.

The College Football Playoff Committee is looking at all the games and clearly does not see Florida State as a number one team, not even a number two or three team, but this week they come in barely hanging on at number four. Part of the reason, quality wins vs quality losses. You may be saying to yourself, but they have NO losses, however they are also lacking ‘statement’ or ‘quality wins’. 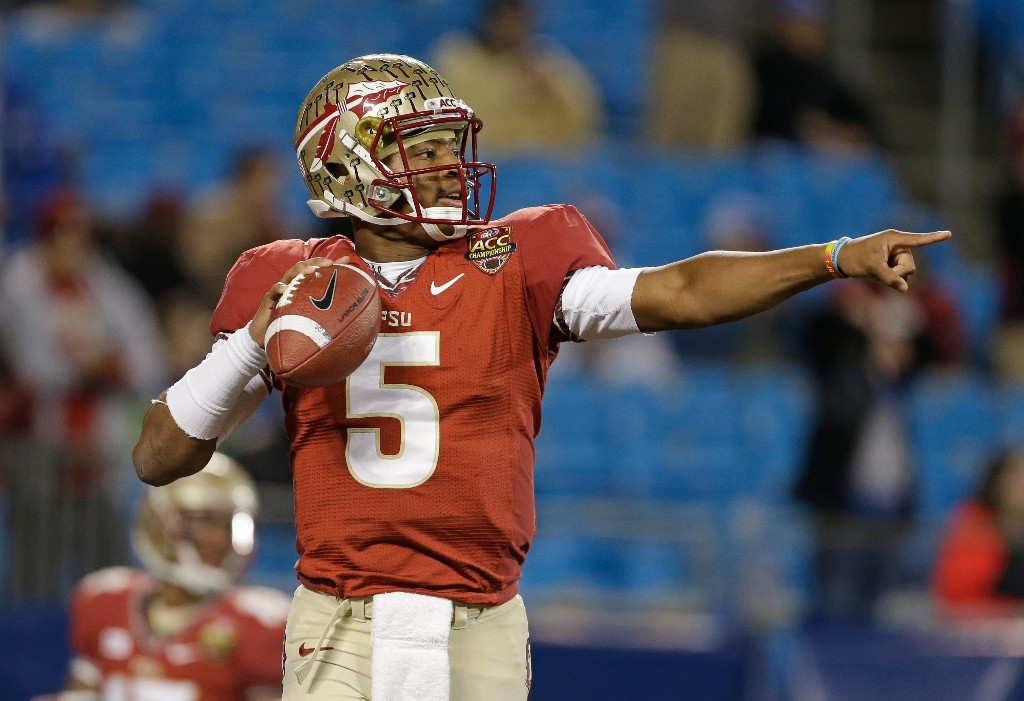 TCU enters as the new number three team and they have one loss to a Baylor team that also finds themselves in the top six at number five. Baylor beat TCU this season, but the Committee sees a quality loss better than a quality win. It also comes down to who is playing better to come up with who is the best in College Football in 2014. With one week to go could Florida State find themselves on the outside looking in on a top four that does not include an undefeated Seminoles team? Could a one loss Ohio State team jump Florida State if they perform well without Starting Quarterback J.T. Barrett who was lost for the season with an ankle injury? This is where the human element should be considered a good thing, right?

It is now Championship Week in College Football. Alabama faces Missouri on Saturday. Ohio State takes on Wisconsin on Saturday and the Pac-12 Championship Game is Friday Night with Oregon and Arizona. Arizona comes into the standings at number seven with Oregon at two. The game will be the only game this weekend with a Top Ten matchup.

Arizona is close enough to the top four that if Oregon loses the Pac-12 Champion would certainly have a good chance at playing in the College Football Playoff. An Oregon Ducks win on Friday could make them the number one overall seed in the College Football Playoff. If you can’t make it to Santa Clara Matthew Knight Arena is having a Watch Party on Friday night following the NCAA Volleyball Tournament.

EDN will be there for the Watch Party and will have Live Coverage on AutzenZoo.com and also with #EDNSports on Facebook, Twitter and Instagram. Kickoff is set for 6pm Pacific Time Friday night on Fox.