Oregon women’s soccer concluded their participation in the Nike Tournament Sunday afternoon as they faced off against Loyola Marymount at Papé Field.

In a close contest through most of the game, it was a late goal from Oregon junior forward Kristen Parr that broke the tie and gave the Ducks a 1-0 victory over the Lions. With the win, Oregon (3-1-0) has now won its last three games.

Before the goal, frustratingly close misses from the Ducks marked the match.

In the first half the two best shots for the Ducks were both good looks that clanged off the crossbar. The frame denied both Oregon’s sophomore midfielder Marlo Sweatman and redshirt freshman defender Caitlyn Wong.

In the second half the pace of the game continued as the defenses looked stout. The Ducks continued to get close attempts, but couldn’t find a way to the back of the net. Freshman midfielder Miranda Schulz, senior midfielder Ryann Davie and freshman forward Zoe Higgins all added their names to the list of Oregon players who recorded missed chances.

Finally the Ducks were able to score via Parr in the 83rd minute. Off a corner from Lily Archer, Parr was able to work her way open to bury the shot.

One of the reasons for the plethora of shots on goal for the Ducks in the game was the play of the outside wingers. Oregon made its living by swinging the ball wide and sending players into the box for quality balls from the outside.

Depth and well-timed substitutions was also key for the Ducks as they tried to keep fresh legs in the game at all times. This allowed the players on the field to hold nothing back and stay aggressive as they knew they could turn to the bench if needed.

Coming into the game the Lions had historically gotten the better of the Ducks, holding a 2-1-0 series advantage. Now with the Oregon win, the series is all level.

The victory also ends a perfect Nike Tournament for the Ducks after they defeated Saint Mary’s as well Friday evening.

Next on the schedule for the soccer team is an appearance at the Oregon State Tournament hosted in Eugene. Both Eastern Michigan and Cal State Fullerton will be coming into town to face off against the Ducks. First game is scheduled for Friday.

On senior day in Corvallis, Ore. the Oregon women’s soccer team couldn’t find a way to win its final home game of the season, losing to Oregon State 2-0.

The game meant a lot to several players on both teams, who were playing their final college soccer game. Oregon State had nine graduating seniors on the field while the Ducks had two: Achijah Berry and Gabbie Lindeman.

The Ducks played well for most of the first half before giving up a heartbreaking late goal with only 2:47 left before halftime. The Beavers, who had been steadily ratcheting up the pressure on the Ducks’ defenders, were able to cross the ball into Brandi Dawson. Dawson was able to slot the ball past Oregon goalie Abby Steele into the far post, her second goal of the season.

Concussions proved to be a costly enemy for the Ducks. Star forward Bri Pugh was held out from the match due to a concussion she suffered last week. The lack of Pugh’s speed was apparent on the field as Oregon seemed a step slow at times.

Coming out of halftime, Steele was benched in favor of freshman backup goalie Lauren Holden. Right before half Steele crashed into the post while trying to make a save. Both head coach Mertz and the Oregon training staff decided to hold her out from the rest of the game because she had started to exhibit signs of a concussion.

Oregon State was also playing a backup keeper, though its reasons were very different from those of the Ducks. Senior Audrey Bernier-Larose was given the nod by assistant coach Michelle Voiland because it was her last game for the Beavers. Voiland was filling in as head coach for Linus Rhode because Rhode was suspended for the game after receiving a red card in their previous game. Bernier-Larose completed the shutout in only her second start of the season.

While Holden played admirably in relief of Steele, she couldn’t prevent the second goal by the Beavers which sealed the game. Late in the second Jenna Richardson, who played well for the Beavers all game, received a pass at the top of the box which gave her an easy open shot. Holden couldn’t make the save as Richardson scored her team-high fifth goal of the season.

It was a quiet game for the Oregon offense. They were only able to generate three shots on goal.

With Pugh out Kristen Parr made the most of her extended role as the team’s number one offensive option. She used her strength up top to shield off defenders, holding onto the ball to maintain possession and allow her teammates to join her in the attack.

In the end, her efforts weren’t enough as the Ducks finished their disappointing season on a disappointing note (4-12-3 overall record, 2-8-1 in Pac-12).

Abby Steele and the Oregon (4-9-3, 2-5-1) defense have throwing up zeros all year long with three draws, two scoreless ties, five outright shutouts, and never giving up more than two goals in a match. But sophomore Maryn Beutler stole the spotlight early in the second half of the Ducks’ final home game of 2013, netting a score in the 55th minute that would not be equalized.

Beutler took three shots Monday, two of them on target and made the most of her last Pape showing of 2013 — playing just 54 minutes as she was subbed out twice for forward Bri Pugh and mid Kira Wagoner. She returned to the turf in the 77th minute and attempted one more shot — the Ducks’ last — and finished the evening.

Beutler’s heroics don’t discount Steele’s stiff goalkeeping, however. The Cal Golden Bears took six of their 17 shots in the final 15 minutes, and Steele got two of her seven saves in that span.

Holding the Bears to just 7 shots on target out of 17 shots was a combined effort from defenders Achijah Berry, Gabbie Lindeman and Riley Smith. All three played all 90 minutes, and for Berry and Lindeman — the lone seniors on Oregon’s roster — it was a very special senior night win.

Oregon came close to stealing a win from No. 8 Stanford, but Cardinal Courtney Verloo spoiled Kristen Parr’s 1-1 equalizer leading to Oregon’s ninth loss of the year. But Monday’s win means the Ducks get to split a weekend against top-15 teams.

The Ducks fly south for a weekend set with the L.A. schools before a Thursday season finale in Corvallis against the Beavers. It will be the second competition of the Civil War series, following just a Sept. 25 three-set volleyball win over Oregon State in Corvallis.

The Oregon Ducks soccer team (3-7-3, 1-3-1) got its first conference win of the season on Sunday to Arizona close out a weekend series with the desert schools.

Oregon fell in a hard-fought 1-0 loss to the Sun Devils Friday after a 71st minute goal from Sara Tosti proved to be the only offensive production. After the match, despite a tough loss, the team remained upbeat about the possibility of getting that first win.

“I told the girls after the game that (a win) is coming,” Oregon head coach Kat Mertz said. “We played well Sunday against Colorado and we’re continuing to play better. We just need a lucky break here and there, and we need to find a way to get the ball to bounce our way and cross that line. The effort is there.”

Of course the Ducks didn’t have to wait long for that first conference win of the season. Freshman ShayLee Miner scored her third goal of the season, the Ducks’ first win since September 1st, in a 1-0 win over the Wildcats.

“It wasn’t a pretty shot, but her first shot was great,” Mertz said. ”It hit off the post and she followed her own shot. We’ve been talking about that. It doesn’t have to be a pretty shot. Just be scrapping in front of the goal and be opportunistic.” 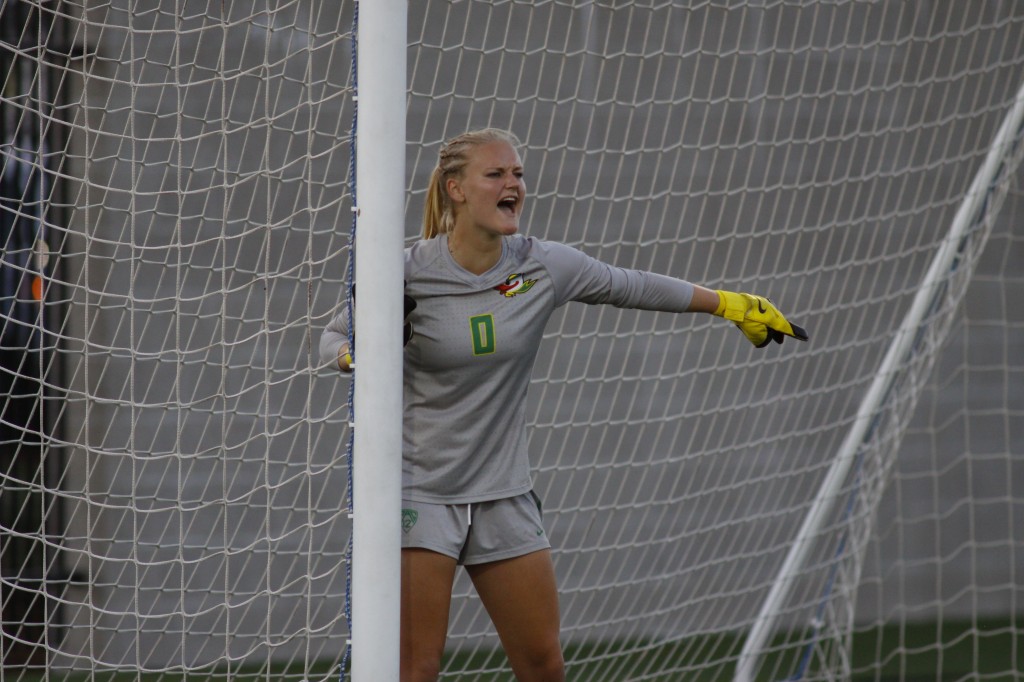 Following a hard-fought 0-0 draw to No. 6 BYU, the Pac-12 Conference has recognized Oregon Ducks goalkeeper Abby Steele as the Pac-12 Defensive Player of the Week. It is Steele’s second time receiving the weekly Pac-12 honor and just the 10th all-time for the Ducks.

[gn_quote style=”1″]“Abby is a strong keeper and against BYU she showed us her true strengths,” head coach Kat Mertz said to GoDucks. “Her kicking game combined with her quickness in the nets makes it hard for opponents to score. Abby is a true competitor.”[/gn_quote]

Steele finished the match with eight saves while not allowing a goal in the program’s first draw against a top-10 team since 2007 against No. 5 Stanford. Steele’s eight saves was a season-high and moves her to third in UO’s career goalkeeper shutouts list with 11 and fourth in program history with 198 career saves. Steele now boasts 36 saves on the season, which leads the Pac-12.

It was also the first time the Cougars were shutout this season, an impressive feat for a young team still looking for an identity.

Oregon Ducks women’s soccer (2-4-1) dropped a couple of hard matches this last week to Hawaii and UC Irvine, both by one goal. Against UC Irvine, the Ducks fell behind 2-0, before mounting a comeback that fell just so short.

A one-goal loss is probably the hardest to swallow in soccer, but first-year coach Kat Mertz got the ladies of Oregon up to play against ranked BYU, earning a double-overtime win against the No. 6 Cougars.

Junior goalkeeper Abby Steele minded the net all 110 minutes and probably had the biggest contribution of all on the Papé Field turf. Steele had eight saves as BYU freshman striker Ashley Hatch tried six shots (four on goal) to lead the Cougar attack. BYU senior Cloee Colohan added two shots on goal, but Steele kept all takers out of the net.

Junior Duck striker Bri Pugh added four shots, but just one on goal. Pugh was named to the Pac-12 all-Freshman team in 2011 and the Pac-12 American all-Academic honorable mentions. Pugh’s four shots tied for the Duck lead with Strawn, and the Ducks actually shot more times than BYU, but BYU angled three more shots on goal.

The Ducks have four losses, but have one more nonconference tilt (with the San Francisco Dons) before they start their Pac-12 schedule. The San Francisco match is at home next Friday and Oregon faces Washington State also at home the next Thursday before taking to the mountains and dueling with Colorado and Utah.

Here are photos from the thrilling draw between the Oregon Ducks vs BYU Cougars last night at Pape Field in Eugene.

The UC Irvine Anteaters snagged a hard-fought 2-1 victory over the Oregon Ducks at Papé Field. The Ducks (2-4) are off to a rough start in head coach Kat Mertz’s debut season.

Following a thrilling win last weekend over Texas, the Oregon Ducks (2-3-0) fell at home to the Hawaii Rainbow Warriors soccer team in a heartbreaking 1-0 game. The Ducks will have a short rebound time with a 1 p.m. match against UC Irvine on Sunday.