Amber Brazil and Alicia Scroggins made contact early this morning:

“We heard from Amber briefly this morning.  She and her friend Alicia Scroggins are alive and well and making a slow trek to where some jeeps might take them back to Kathmandu and then to the embassy.  The call was brief and no word of who they are traveling with.  Will update if heard from with more info.” — Ashley Brazil.

Two local women on a guided trek through the Himalayas are currently missing in the aftermath of the 7.8 magnitude earthquake in Nepal.

The epicenter of Saturday’s 7.8 magnitude earthquake was centered approximately 90 miles northwest of the Eugene sister city of Kathmandu near the Nepalese city of Pokhara.  The earthquake and the many serious aftershocks, some as large as the 6.7 magnitude Northridge quake that struck California in 1994, have brought the death toll to approximately 3800 confirmed deaths with many more thousands injured and missing.

The women, Alicia Scroggins and Amber Brazil set out on a 7 day trek in the region of the Langtang National Park on April 20th and were expected to return to Kathmandu on the 28th.  According to information Eugene Daily News received in an email from Bob and Lisa Scroggins, parents of Alicia Scroggins:

“We have not yet heard from her (Alicia).  The tea houses along the (Tamang Heritage) trail do have Internet, though communications are affected, and she may not be in one of the villages either. She and Amber are registered on the trail and are travelling with a guide.

They women are hiking on the Tamang Heritage Trail in the Langtang National Park in Nepal.  This is a valley area and the highest peaks they will climb are around 3300 ft, so not too high. They arrived in Syabrubesi, a 7 hr drive northeast of Kathmandu, on the 20th of April.  So they may be 4 or 5 days into their trek. I believe they make the circuit clockwise.  They are due back in Kathmandu on

Scroggins graduated from Thurston High school in 2011 and attended George Fox University majoring in International Studies. Scroggins currently lives in Auckland New Zealand.  Scroggins had recently completed mission work in Germany and Greece.  She joined Amber Brazil in Thailand before the pair travelled to Nepal.  Scroggins is the youngest of five with three sister and one brother.

A 37-member urban search and rescue team from New Zealand departed early this morning for Kathmandu including 10 search and rescue specialists, two paramedics, a doctor, an engineer, seven logistics personnel and 10 command and IT support staff.

“The UN knows that we will arrive in the country with the necessary equipment and expertise to hit the ground running and to help, rather than hamper, rescue efforts,” New Zealand Fire Service National Commander Paul Baxter said in a statement.

“It’s gratifying that we can make a contribution to what is a desperate humanitarian situation.”

Amber Brazil was in Thailand completing the internship portion of her Bachelor of Science degree in Environmental Studies at the University of Oregon. She is the daughter of American Mattress owner Casey Brazil and Peace Health Educator Jennifer Brazil.  Brazil has a sister, Ashley who is an Assistant Manager at Marche’ Provisions.

Brazil is a long term volunteer with the Cascade Raptor Center in Eugene.

“The outpouring in the community has been overwhelming and very welcome.” Brazil’s mother told Eugene Daily News in a brief phone interview.  She forwarded us a copy of a message she had received from Raptor Center Education Director Kit Lacy:

“Hi Jennifer, I am sure you are overwhelmed with concern for Amber but I wanted you to know that her raptor family at CRC is thinking of her. Many of the volunteers on our list have been sending messages asking if our staff have heard anything. All of her fellow volunteers are concentrating on her safe return. Let us know if there is anything at all we can do for you. Sincerely, Kit Lacy, Education Director CRC. ”

According to Lisa Scroggins: “It looks like they (Brazil and Scoggins) were possibly going to Pokhara after the trek, but definitely not before which may account for the extra two days in their itinerary. If that is the case, then they may have been on the Day 5 Thuman to Briddim leg of the Tamang Heritage trek. (at the time of the earthquake).”

Brazil and Scoggins are registered with Nepalese tourism authorities and have been added to the US Embassy of Nepal Missing Persons record.

The earthquake caused a catastrophic landslide at the Mount Everest base camp killing 17 people, but no such damage has been reported from the area the women were last known to be in.  If you have family or loved ones in Nepal, or have contact with or information about these women please contact [email protected]

We will continue to update this story as information is received.

CORRECTION Relief and Gathering places have been requested in the vicinity of Briddim.  These represent locations where groups of survivors are understood to be congregating. 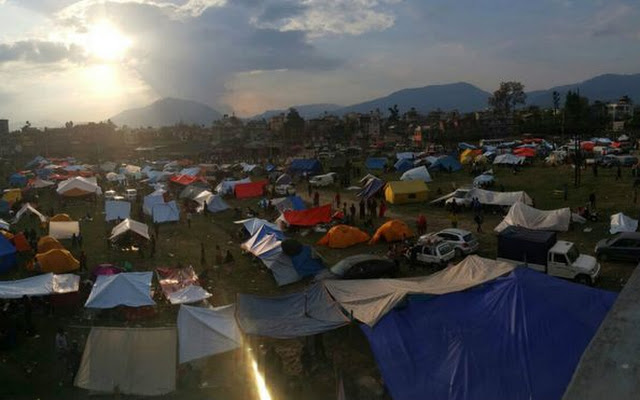 We had been tracking Newcastle Herald journalist Peta Doherty; she was in the vicinity that Brazil and Scroggins are likely in. She was recently found and has been in contact with her paper. Newcastle Herald Online Editor, Paulina Vidal, was kind enough to forward us this information about Peta and the area she is in:

“Her group of seven, including her sister, are in a shelter in a small town called Ling Ling. (HER MUM ALSO MENTIONED THAT THE ONLY WESTERNER IN THE GROUP WAS A FRENCH MAN? AS YOU KNOW GETTING FACTS OUT OF THE AREA IS PROVING DIFFICULT. THIS NEEDS TO BE CONFIRMED). They can hear land slides all around them, the bridge to get out is destroyed, tremors are ongoing and they have been told that there is the likelihood of another earthquake in 36 hours. They are desperate to get out but it seems that the only way to do so is by helicopter. Their guide is looking after them, gathering and cooking whatever he can find and they have access to water. Their priority for today is to try to organise a helicopter out.”

We’ll keep looking for Amber and Alicia and we’ll keep you updated.

Evacuations are in full swing in the Langtang Valley including Briddim.  Hundreds have been evacuated thus far, names are expected to follow in the coming hours.

“We just got to Kathmandu after walking all day and luckily catching a ride from kalikastan once the roads cleared up. Still looking at tickets … trying to get home asap! Alicia’s iPad broke so I can’t skype … we are eating dried top ramen, and thankfully I brought by water purification tablets so we were able to drink the stream water and clean it. We are in the city now and out of the camps so we have everything we need.”

CORDELIA, Calif. — A local father and his son felt the earthquake while they were spending the weekend in Northern California.

Medford resident Shane Schmidt and his son are staying in a hotel in Cordelia, California before a trip abroad. Shane says he and his son woke up around 3-15 in the morning to the ground shaking beneath them.

“And I felt something move and I turned over to my stomach, and looked over to his bed and literally his mattress looked like it was on waves,” said Shane, “and then I looked over to the cable where we had some soda cans, and some things laying and a couple of those had shifted, and everything was still moving, and it went on for a good 15-20 seconds, it felt like. So I immediately knew what it was.”

There was no sign of damage around their hotel which is about 6 miles from the epicenter. Shane said he has felt one other earthquake in his life, it was in 1994 in Seattle.

BANDON, Ore. — An earthquake hit just about 150 miles off the coast of Bandon.

It happened around 9 a.m. Friday and registered a 4.4 on the Richter scale.

So far there are no reports of damage or injuries.

Sunshine and dry weather for your Thursday. What about the rest of the week into the weekend?

A weak high pressure ridge (“arch” forming on the orange jet stream line) will build up just long enough to give us a series of dry days. A frontal system pushed through Oregon bringing some pretty heavy showers with it and now high pressure at the surface (represented by “H”) is combining with the upper air ridge to clear us out for some sunshine.  The question is when will it fade another upper level low (“U” shape on jet stream line) set up off the coast to bring back the rain.

Because weather forecasting is a combination of science, intuition, and timing there can be no absolute guarantees that individual forecasts will be 100% accurate. Nature is in a constant state of flux and sudden unexpected weather events can happen.

Keep Current on the Weather: timchueyweather4u.com

Here are this mornings local headlines:

Tim Chuey Weather
A drier day today, but it won’t last long. The rain chance will return by late tonight.
Tsunami Warning for the Oregon Coast
Waves of more than 6 feet may hit spots along the Oregon coast as the ocean surges after a massive earthquake in Japan. The first waves are projected to hit approximately 7:15 – 7:30 a.m. today. Much larger waves are possible later in the day.
Fern Ridge’s ballot is heavy
The Fern Ridge School District will two property tax measures on the May 17 ballot.
Critics say BPA drops ball while juggling its power
So much electricity flooded Pacific Northwest powerlines last spring, that this spring, a federal agency wants the option of turning off wind turbines to keep the system from overloading. Thank goodness our rates haven’t gone up.
Satellite TV companies top Oregon complaint list
A new report released by the Attorney General’s Office put the spotlight on companies that have been scamming Oregonians for the past year.
Athlete Exclusive Parking Lot
The University of Oregon is building a new parking lot for student athletes, support absent.
University senior Pennington dead at 22
University senior and business administration major Alexis Pennington, 22, died of brain swelling Sunday evening at Sacred Heart Medical Center at Riverbend in Springfield

Weather Forecast Update
Tonight: Occasional rain, mainly after 10pm. Low around 39. South wind between 5 and 9 mph. Chance of precipitation is 90%.
Tuesday: Showers. High near 56. Southwest wind between 14 and 16 mph, with gusts as high as 21 mph. Chance of precipitation is 90%
Name released of Creswell woman found deceased on Hwy. 99 near Goshen
Oregon State Police detectives and troopers are continuing the investigation into the death of a 42-year old Creswell woman early Sunday morning along Highway 99
Former governor’s portrait removed from Oregon Capitol
Senate President said the portrait was removed from the capitol out of respect for the former Oregon governor’s sexual abuse victim, who recently passed away.
Earthquakes off the coast raise eyebrows but not alarm
Experts say four earthquakes in 24 hour period are not an indication that the “big one” could be next.
Kitzhaber to unions: ‘Oregon will not copy Wisconsin’s plan’
Hundreds of workers from public and private labor unions rallied on the stairs of the Oregon Capitol on Monday.
Path on old RR to Coburg Proposed
A new bike path on a former railroad grade connecting Armitage Park to Coburg has been proposed for inclusion in the region’s official transportation plan (RTP), but without funding.
Irving Road Closure
Reconstruction of the roadway surface at the Prairie Road and Irving Road intersection begins soon.

Late night and early AM fog and freezing fog, then sunny and a bit warmer for your Monday.