The Tennessee Volunteers come to town for a return match up as Tennessee is one of the few SEC teams that honors it’s scheduling contracts. The Vols 4-3 base defense has been working hard at being prepared to try and stop the high octane Ducks offense.

Tennessee probably has the best linebacker group in the SEC, led by inside LB A.J. Johnson as the 6′-2″, 243 pound junior led all the SEC in tackles last year. The sam LB is Brent Brewer, a 6′-1″, 221 pound senior and the will LB is Dontavis Sapp, another senior at 6′-2″ and 227 pounds; these three Vols are big and fast. But can they slow down the Ducks, as they’ve been able to slow down many other teams? This is the same Tennessee defense that had seven take aways against Western Kentucky last week. Additionally, the Vols feature a monster run stopper in DL Daniel McCullers, a 6′-8″, 351 pound senior who controls the middle of the line at nose tackle. 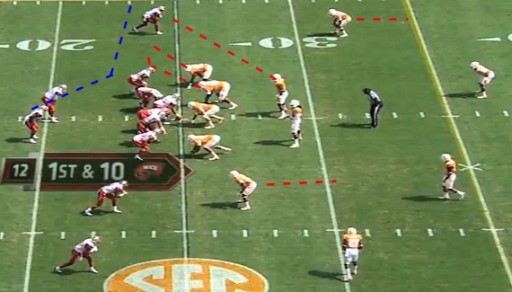 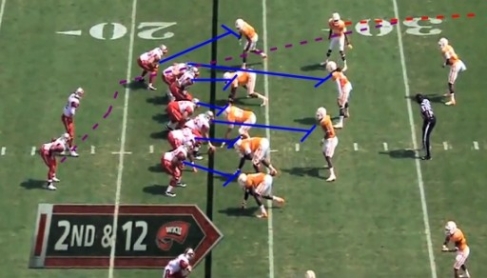 However if you look at this next picture above, Western Kentucky takes the short corner between the double TE’s and nets a gain of about seven yards. Again the Vol D was in a base 4-3 and the Hilltoppers made a few yards despite the fact Tennessee had moved an extra defender on that side(the CB marked with X). 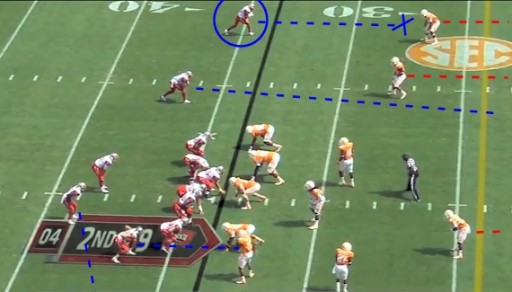 In light of all this, the Vols defense seemed to be vulnerable to the short (5-8 yards) pass, and had they chosen to, the Hilltoppers could have nickle and dimed the Vols to death. In the picture above you can see how the short pass, which was good for about eight yards, came to be. Part of the issue was that the DB’s were giving much too much of a cushion to the Hilltopper receivers. Chances are they are going to give the Duck receivers even more cushion because of the Ducks speed. 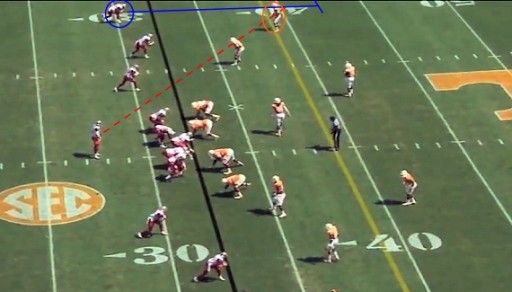 Tennessee had two, and back-to-back at that, pick-six’s last week, the first from a batted ball and this one above resulting when the Hilltopper’s quarterback threw late and behind his receiver, and into the hands of the waiting DB. The Vol DBs are ball-hawks and pay close attention to what is happening; the Ducks will need to be crisp in their execution this weekend. 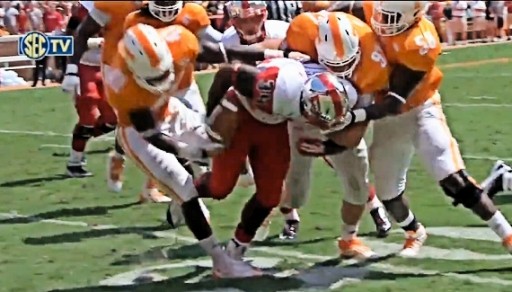 In this next picture above, we see just how successful the Volunteers are at stripping the ball away from running backs. If the Ducks are lax in any area of ball security the Volunteers will take advantage. Even though the game is at Autzen, turn overs could spell a long day for Oregon. 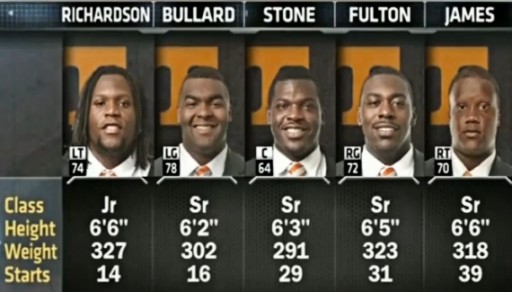 On the other side of the ball, the Tenneessee offensive line is massive. As you can see in the above picture, the line averages 6′-3″, 312 pounds and have 129 starts between them. This is a senior group of players who know what they are doing, and will be a challenge for the smaller and lighter Ducks defensive linemen 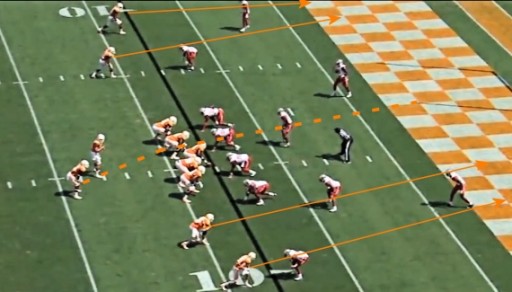 In this next picture above, we see how the Vols use the four wide outs to help open space for the Tennessee RB up the middle. But it is the offensive linemen who create the lane for the RB to score. Also, those same five OLs only allowed eight sacks last year which was tied for third best in the FBS.

With the Ducks speed, there is a good chance the Volunteer DBs will be giving them a lot of cushion to prevent the big play. For the first half, I suspect that the Tennessee linebackers will be able to stay with the Oregon offense, but by the second half, the Ducks conditioning and pace will wear down the Vols. A final score of 52-20 doesn’t seem unreasonable, as long as the Ducks don’t turn over the ball.

Surprises in the Oregon offense are fun for us as fans because they are delightful to discover, and ponder their future impact upon our beloved Ducks. In this second game of 2013, we note the return of a major play in the Oregon attack, the disappointment in the results of another foundation play for the Duck offense, and an amusing twist not seen but once in last year’s offense. For FishDuck.com—we are at an interesting point in offering analysis as so much of what we see on the field has been analyzed before, but we can now delve into the finer points of what makes a play successful. We have a superb example of that from the Virginia game, and it reminds me how much fun this season is going to be! 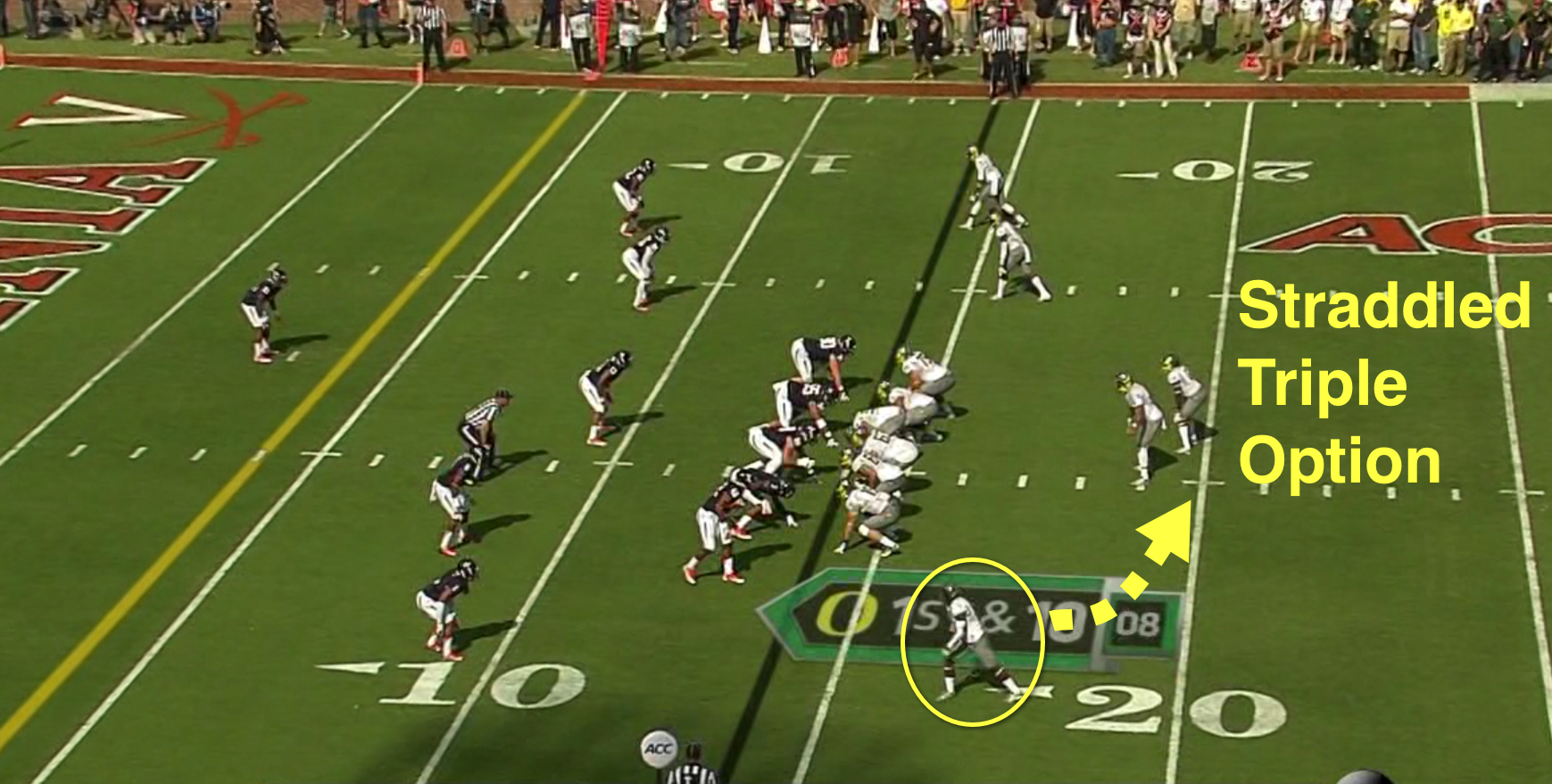 Let’s look first at the “bad” of the Oregon Offense yesterday, and I am not going to dwell on the obvious of us missing two fourth down opportunities. The ESPN announcers Saturday were particularly lacking in analysis as they called a “Zone Read” a “QB Fake” numerous times. We would not expect them to see nuances that we as readers of FishDuck.com have learned over two years ago, such as our Straddled Triple Option play. Above we see how although we only start with two in the backfield, the slotback (yellow circle) is going in motion to end up looping around and becoming the third option or pitch-man.

In the screenshot above it is apparent that Marcus believes that the outer two options are covered by the Virginia defense, hence he hands off to the RB (orange arrow) as the Inside Zone Read option of the three available. 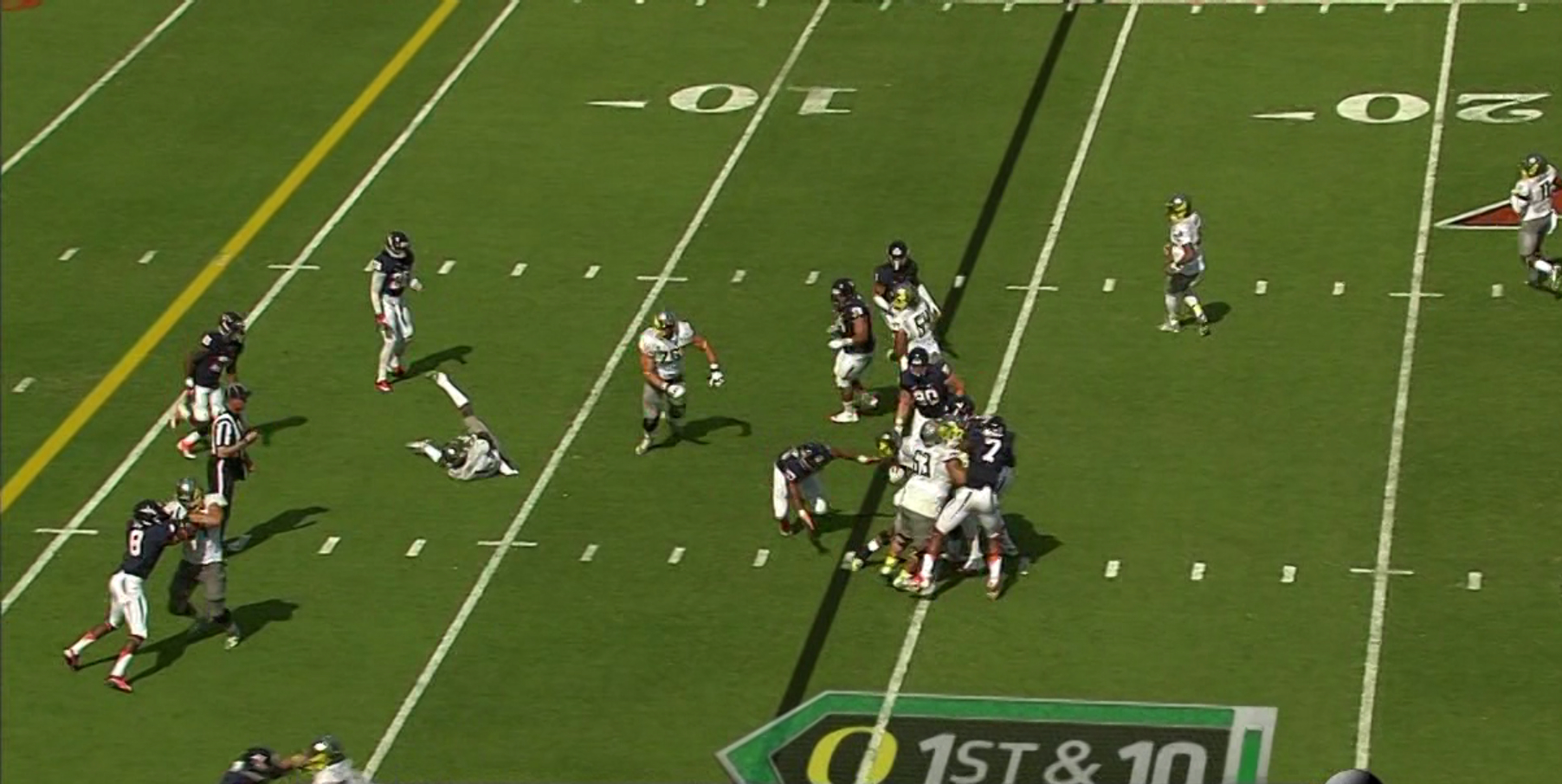 The Virginia defense was stout inside (Above) as they got push on our guards and center and stuffed the play for a small loss. This was common early on as it seemed that the Cavaliers’ first priority was stopping the Duck’s Inside Zone Read play, which is a sound defensive strategy against Oregon. This pattern continued through the day as Oregon never got one of their foundation plays of the Oregon Offense, the Straddled Triple Option, untracked. While this to me was the “bad” of the day—it makes me eager to see how Oregon will overcome that challenge next week!

For the rest of the article concerning the twist in the Oregon Offense, follow me on over to FishDuck.com.

Fishduck.com’s Oregon Football Analyst Charles Fischer shared his first football video analysis of the 2013 season recently as he found an unusual play in the Nicholls game, some new players that have been under the radar of most local media, and some tips on what to watch for among our new linebacker starters.  He first gives us a bit of the analysis from Defensive Analyst for the site FishDuck.com, Sean Goodbody, who has found this “must watch” item within the game tape of the Nicholls contest.

The level of play from our defensive line was impressive on Saturday, but the area of weakness on the defense comes from our two starters (Above) at Inside and Middle Linebacker.  They did not do as well at shedding blocks but do appear to be placing priority in making their correct reads on defense. 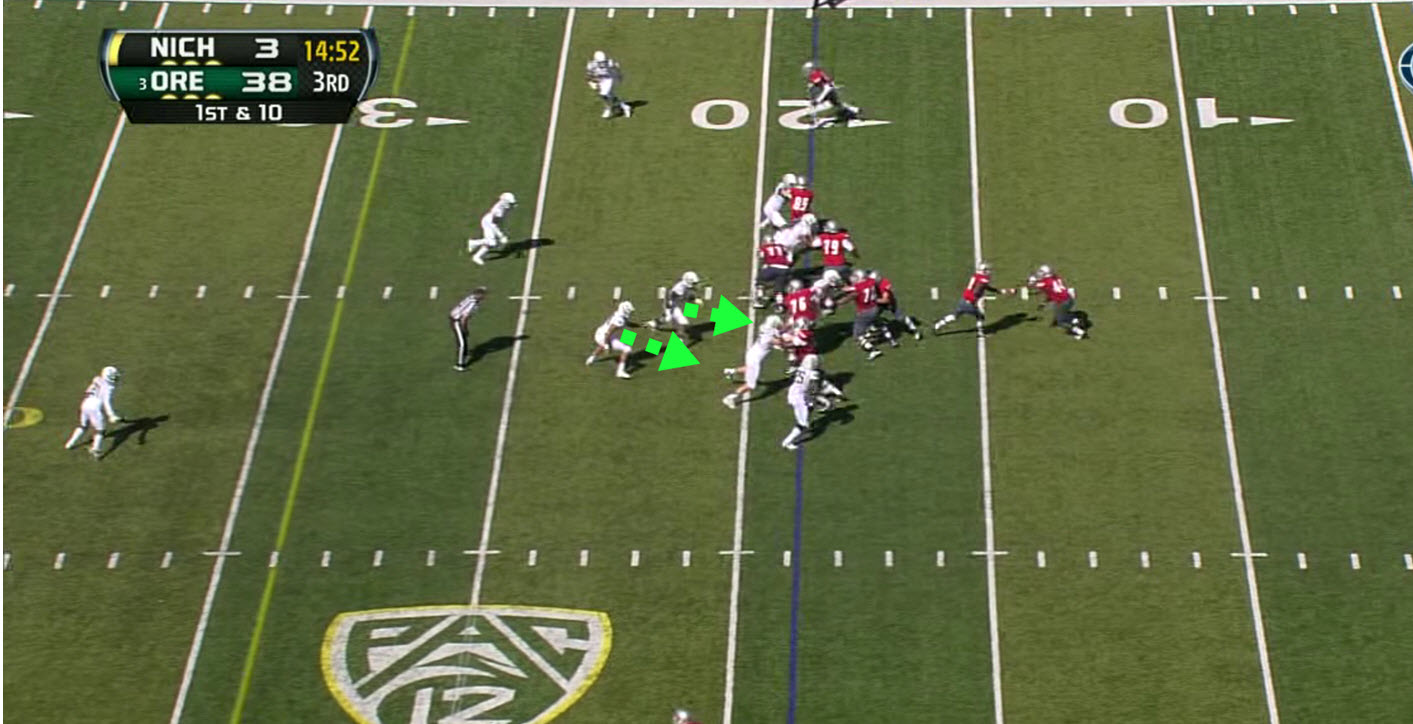 The play has begun (Above) and the linebackers are following the flow of the play and are correctly reading their keys. 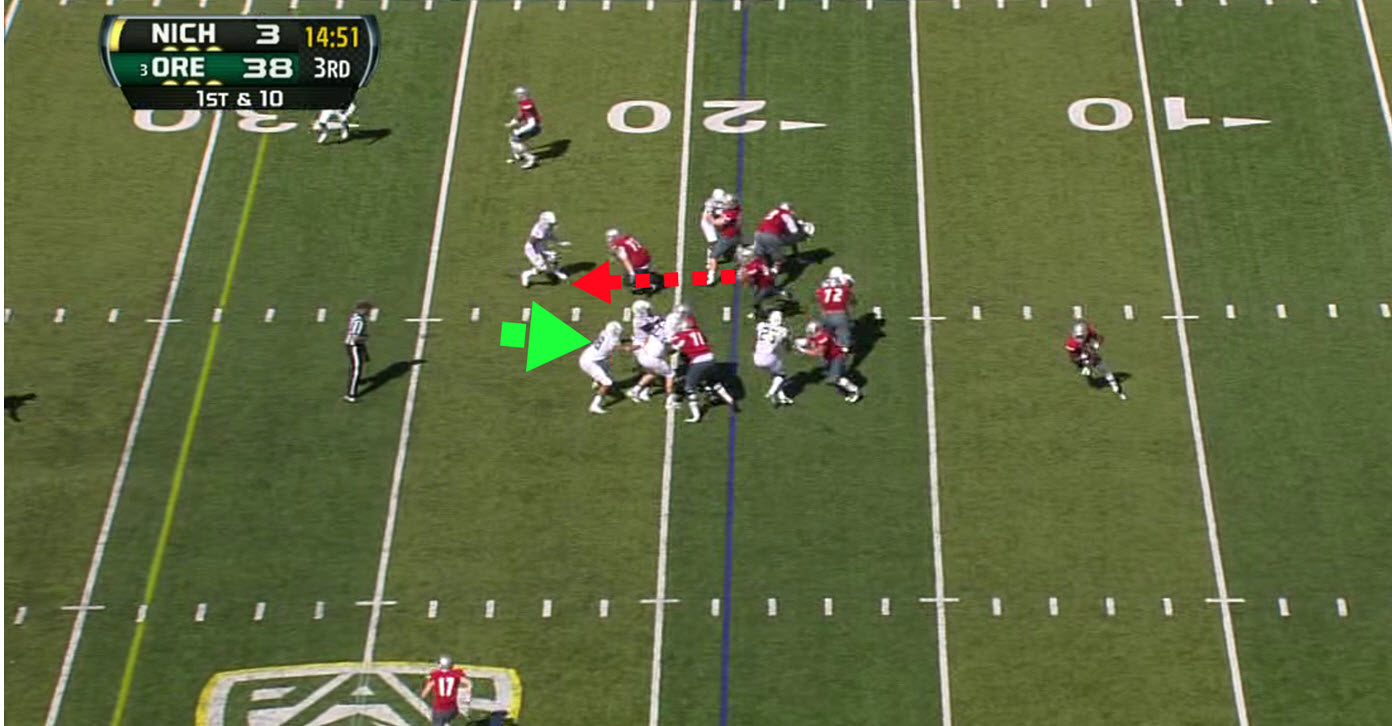 One linebacker is clearly being blocked  while the other is caught up in the “wash” of blocking, (Green arrow above) and has not cleared the blocks and thus the opposing running back has assured of at least a 6 yard gain. 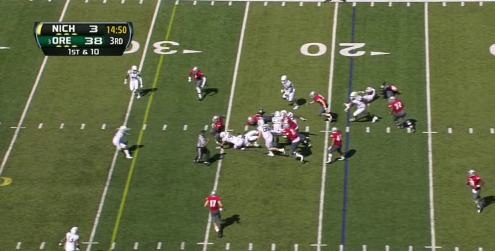 Unfortunately the Nicholls running back (Above) has already gained six yards with more yet to come.  Sean insists that our secondary is superb at tackling in the open field, so we simply need the linebackers to defeat blocks are get around “the wash” quickly to close up the running lane.  We had too many six to eight yard running plays against us and it will be interesting to see the LBs progress this week playing a good team in Virginia.

The complete FishDuck.com analysis of the UO – Nicholls game can be found HERE

“Oh how we love to learn about our beloved Ducks!”  –Charles.