Here’s “Where, When, Whats Happening(3 W’s) this 4th of July weekend!”

9pm Fireworks and The Procrastinators.

The Mohawk: Friday…BBQ Bash with Bulls On Parade.

Have a safe and Happy 4th of July weekend and please don’t drink and drive. 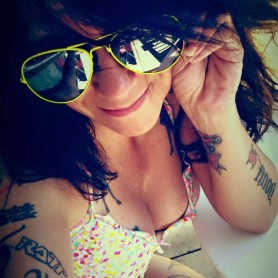 Hello, BJ here with this weekend’s When, Where, What’s Happening.

How old were you when you starting playing music and what was it you first played?

I was 12 years old when i first started playing the tuba and my first teacher was band teachers for horns. Other then that I was self taught. I’ve been involved in music in one form or another since then, so… 36 years now.

What band are you in and what do you play in it?

What made you choose the bass?

I’m lazy and only want one note at a time so the bass fits my personality.

What other Instruments do/can you play?

I was a professional tuba player in the marines. Besides bass and tuba, I can also play piano, French horn, bass trombone, euphonium, bass drum and bass cowbell.

What other bands have you been a part of?

Code Red is my second band. Before that, it was a band (mostly) garage band called Saint Krampus. We had one gig… and broke up.

Who were your biggest influences?

All over the place. Rock, blues, classical, jazz, swing, symphonic, etc. Since I’m currently in a rock band. I’ll talk about those. There are so many great artists out there… Iron Maiden, Foo Fighters, Black Sabbath, Pantera, Dream Theater, Rage Against The Machine, Rush, Kiss, Motley Crue, Stevie Ray Vaughan… way to many to list, but definately more in the hard rock/metal arena.

What do you think about the local musicians?

Of the musicians I am aware of, I know that there is a ton of talent out there and I feel very fortunate to be mixed into the thick of it. There are so many local musicians that we don’t ever hear or see, for one reason or another. I’d love to be able to spend the time to check them all out. Doing so helps me become better doing what I do.

If you could sit in with any other local band who would it be?

What do you love most about what you do?

Easy! All the people. Fans, dancers, other musicans.

Is there anything else you would like to say about yourself or your music?

I’m a nerd through and through. I get involved in the technical aspect of sound and light way more then my own instrument. I love hearing what other bands are doing… love going to catch other band’s shows and support the music scene beyond my own band when I can.

The music scene is thriving in the region and I’m so happy and feel very fortunate to be a part of it!

Unfortunately due to a scheduling mishap Mark Nash and Code Red won’t be playing this weekend but will be back in our 3 W schedule next weekend.

Now onto this weekend’s When, Where, What’s happening.

The Mohawk 1501 Mohawk Blvd : Friday come on out for some Rockin Rollin with Piksix and help them in celebrating their drummers birthday(happy birthday Brandon Pinnell!) Meet the Fireball girls,get your $4 Fireball shots and swag! Piksix will be donating their tips to Relay for Life. If you didn’t get enough of Piksix on Friday night then you just got lucky because they will be back on Saturday!

April fools day just passed and I was reminded about the time that my oldest daughter then about 13, now a mother of 7 herself decided to try the old sugar in the salt shaker April fools trick on me.  It worked of course better then she would have thought. The salt shaker was untouched until about a week later when I used it on a cup~o~noodle, by then she had totally forgotten about April fools day and when I took that first sugary bite and looked at her and said wow my noodles taste so sweet, she all of a sudden remembered why and started to laugh, then realized she had just shook the same salt shaker onto her own noodles ha ha ha April Fools!

Have a wonderful weekend and as always please don’t drink and drive.

See ya next time, BJ 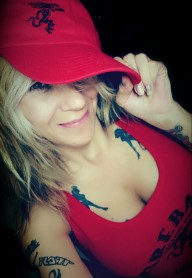 Welcome to Friday September 26th 2014 and the last  “Where, When and Whats Happening” of September.

“Ring out the bells again
like we did when spring began
wake me up when September ends” (Green Day)…  with that Autumn walks in and i don’t mean my daughter Autumn, shes still in Nashville.

For the past 5 weeks ive been hanging out every Thursday night with a mob of dancing zombies as they practice for “Thrill the World Eugene” which happens in about 5 weeks.

Each year on a given day the mob of dancing zombies meet at a chosen area  in Eugene  and perform simultaneously to Michael Jackson’s song “Thriller” with other dancing zombie mobs in cities all around the globe, hoping to set a new world record of “Thriller”  dancing zombies.

In a few weeks i will have more to this story and the time and day for the dancing zombie take over.

Lets get to the weekend.

Friday and Saturday night at 8pm,  WOW HALL its Floater, opening for them is Groovey Wallpaper on Friday and Hyding Jekyll on Saturday. I heard this is going to be a show you dont want to miss.

At Matthew Knight Arena on Friday is Zac Brown Band at 7pm and afterward you can come join the fun at The Whiskey River Ranch with The Easy Leaves playing at the Zac Brown after party.

MR. Wizard live at the Mohawk, Friday and Saturday the 26th & 27th… Springfield OR.

On Saturday you might want to join in on a little two steppin’ with  Steve Benavides and Haywire at The Whiskey River Ranch.

Last but not least its FUNGI… Klamath Falls saturday at Aftershock with special guest, FUN GUY Derek Zane (in case someone takes a wrong turn at Drain) .

Have a wonderful and safe first Autumn weekend of the year and see ya next week.

Hope you all had a great week and welcome to the weekend with BJ’s “Where, When and What’s”  happening

My week was pretty good. On Monday I got to meet the man that stole my youngest daughter’s heart and is on the way to becoming my son in law.  He’s from Nashville and was in Washington for the Washington State fair.  He travels with the country band “Florida Georgia Line” as their videographer. By the way, they put on a great concert!  Very talented and handsome men, not to mention so real and down to earth. And although I couldn’t bring my camera into the concert, I was a guest on this outing, I did get a cell phone shot or two to share with you. My suggestion: if you ever get a chance, go see Florida Georgia Line in concert, you will leave there with a smile on your face. A little tip from me to you: I hear they are slated to play next years Cape Blanco Music Festival. worth watching for the dates and  planning a “Cruise” on over to the Oregon coast.

Now onto this weekends “Where, when and what”

I want to start off this weekends 3 W’s by letting all of you know that this Saturday the 20th is the Memorial (Celebration of Life) for our dear friend and local band member Alex Gonzalez Arguinzoni(Toyz).  Alex did not want a funeral, instead he wanted everyone to gather together, have a party and play some music in his honor.  Alex will be getting what he wanted, a real party for Alex! Bring a guitar or bass and come and join us in saying good bye at Walt’s Pourhouse 1880 N. 7th. St. Coos Bay, Oregon at 3:00 pm.

On Friday 9/19 its  Rock/Blues music with The KingPins at Happy Hours on River rd. and Classic Rock band Red Thunder is what’s happening at Embers.

Another fave of ours, Code Red, featuring the newest member 24 year old vocalist Breana Cahoon, will Rock you at Jerseys Bar in Junction city, 330 Highway 99 S, Junction City, Oregon  starting at 9pm.  Breana can play, and what a voice she has.

If you’re feeling a little bit country this weekend, you can put on your cowboy boots and scoot on over to The Mohawk on Mohawk Blvd. and kick it with the guys of Haywire!

Up North this weekend you can catch the one and only Mister Wizard on any or all  3 of these nights (Fri. Sat. and Sun. 19th-21st). They will be playing the Grand Opening at Woody’s in Salem, Oregon and be live at Three Rivers Casino this Saturday from noon to 3pm.  Dave Bock from Mister Wizard will also be performing a solo show at the Cottage Grove covered bridge festival in Cottage Grove, Oregon from 5-6pm on Saturday the 20th, three shows in three towns in one day… busy man that Dave Bock.

Enjoy your weekend wherever you go and I’ll be back next Friday with your weekends “Where When and What’s” happening!

Be safe and remember if you see me out somewhere, don’t forget to say hello.

“With your where, when and what’s happening” for the weekend. The 3 “W”s you just can’t live without.

This Friday 9/5, there’s the St. Jude’s Children’s hospital Benefit Auction Extravaganza starting at 6:30pm at the Mohawk tavern (1501 Mohawk blvd in Springfield). Stick around afterwards as Shane Ranger, Michael Leroy, Dan Pacheco and Jason Elissalde of local band Bulls on Parade take the stage. And, if you don’t get enough of this fun, over-the-top 90’s tribute band on Friday night, they will be back Saturday the 6th in sheets & a smile (toga! toga! toga!). Come tie one on (sheet, that is),  grab a delicious Mirror Pond for $2.75 and join the Mohawk Tavern Toga Party!

The Whiskey River Ranch(4740 Main st. in Springfield) is going to be one of my stops this weekend with great food and another very entertaining local band CODE RED with special guest Breana Cahoon on Friday. This will be a party you won’t want to miss! On Saturday at The Whiskey River Ranch is the country band, Haywire,  with Steve Benevides (lead vocals), Eddie Clark (drums),  Michael Milosevich (bass),  Kurt Caitlin (guitar),  and new 2nd guitarist Chad Jensen.  It going to be a great country night! Yee hooty!

If you’re not quite ready for summer to be over, get into your fave summer clothes and surf on over to Happy Hours on River Road in Eugene to Rock and Roll with Monolith at their “Holding onto Summer” bash!! Starts at 8:30.

If you find yourself at the coast this weekend, stop in at the Mill Casino’s Warehouse 101 on both nights for some classic and new rock by Mr. Frown featuring Joe and Rica from Satin Love Orchestra.

Oh and hey! …remember: if you see me out somewhere, say hello.

Be safe and I’ll be back with my “Where, When and What’s happening” report next Friday.